Anthony Joshua vs. Oleksandr Usyk will have rematch clause

By Charles Brun: Eddie Hearn says there will be a rematch clause for Anthony Joshua vs. Oleksandr Usyk fight in September. This is an unusual case as rematch clauses are generally only used when a champion makes a defense against a voluntary challenger.

WBO mandatory Usyk (18-0, 13 KOs) and IBF/WBA/WBO heavyweight champion Joshua (24-1, 22 KO have agreed to the rematch clause. Additionally, part of the deal is a return fight for the former undisputed cruiserweight champion Usyk, 34, if he loses to Joshua.

You can understand from Usyk’s perspective why he wouldn’t have a problem agreeing to a rematch clause for a fight with Joshua in September.

The money that Usyk will make from a second fight with Joshua will likely far surpass what he could make fighting any other heavyweight in the division, including Tyson Fury.

If Usyk beats AJ in September, he’ll make a fortune fighting Joshua in an immediate rematch. Usyk would be in the same position that Andy Ruiz Jr was in after he defeated Joshua in June 2019. Ruiz Jr gave Joshua an immediate rematch later that year in December 2019 and made a massive amount of money.

For Usyk to be able to move on to face the winner of the Tyson Fury vs. Deontay Wilder trilogy match on July 24th, he’ll need to beat Joshua twice. 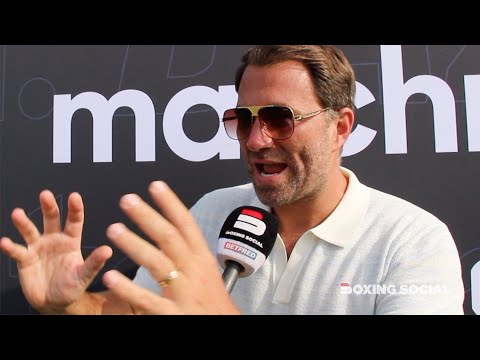 That’s going to be a tough feat for the 34-year-old Usyk, but not an impossible one. The money that Usyk will make from the two Joshua fights will make it worthwhile.

Obviously, Eddie Hearn will be criticized for attaching a rematch clause for Joshua’s mandatory defense against Usyk because the perception the fans will get is he’s not confident AJ can win this fight.

Usyk really had very little choice, if you think about it, but to agree to a rematch clause for the Joshua contest. If Usyk and his manager Alex Krassyuk had said ‘no’ to the idea of giving Joshua a rematch clause, he’d likely have vacated the WBO title, leaving Oleksander to scramble for it against the big lumbering 6’6″ Joe Joyce.

The money that Usyk would get for a fight with Joyce would likely be minuscule compared to the green that he’ll be receiving to fight Joshua a second time. It wouldn’t be an easy fight either for Usyk to take on Joyce.

Usyk took a lot of punishment in his five-round win over Joyce in the World Series of Boxing nine years ago, and that was when Joe was a thin 231 lbs.

Now that Joyce is in the 260s and hitting harder, he would do a lot of damage to Usyk in a 12 round fight because, unlike Derek Chisora, he doesn’t tire. Usyk couldn’t count on Joyce gassing as Chisora did.