By Allan Fox: Floyd Mayweather Jr reminded the media this week that Canelo Alvarez was “easy work” for him in their fight eight years ago in 2013 when he beat the then 22-year-old in a catch-weight at 152.

Mayweather has been asked questions about Canelo all week, which is a clear sign that the media are less than excited about his exhibition match against YouTuber Logan Paul. Floyd might as well be fighting a professional golfer. It’s not even a fight.

When Mayweather was asked if his fight with Logan could be the start of a comeback to boxing, he nervously took a drink of the beverage bottle he was holding and said, “I’m retired.”

Mayweather could make a lot more money fighting Canelo Alvarez or Manny Pacquiao in a rematch now than ever will for an exhibition match against a hapless YouTuber, be it Logan, Jake Paul, or KSI.

Unfortunately, Mayweather has no interest in fighting Canelo or Pacquiao, meaning that he doesn’t want his perfect 50-0 record blemished by a loss.

You have your risk-takers from the past like Salvador Sanchez, Roberto Duran, and Muhammad Ali, then you have Mayweather. It’s like apples and oranges. Duran, Sanchez, and Ali took chances in their respective careers. Mayweather didn’t. Even his dull fighting style was risk-averse.

“Once again, I’m retired,” said Mayweather in response to a question about whether the Logan Paul exhibition lights the fires for a comeback.

“I didn’t even see it,” said Mayweather in being asked if he watched Canelo’s last fight against Billy Joe Saunders. “Where did he fight on the app [DAZN]? You said he fought on the app, right? A real fighter fights on Showtime.

“A lot of times guys are like, ‘I’m bigger, I got a longer reach,’ but I’m a better fighter, I got a strategy, I can fight. In the build-up to the fight, I’ve already made 30 million dollars,” said Mayweather bragging about some of the money he’s already made for his exhibition match against Logan Paul.

When Mayweather says ‘”easy work” when talking about Canelo, he’s obviously referring to their fight in 2013. No way on earth would the 44-year-old Floyd step inside the ring with Canelo right now at this point in his life.

Mayweather would likely lose to every contender in the top 15 from 147 to 168. He’s too old, slow, and weak to compete with any contender, even the bottom feeders in the top 15. 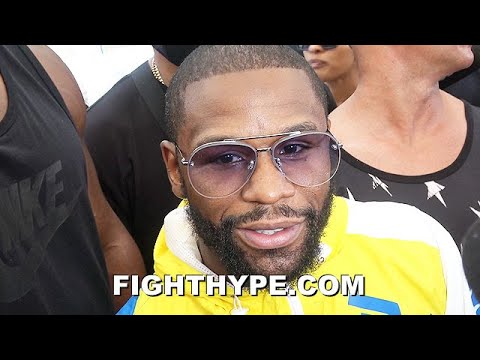 
« Tyron Woodley: Jake Paul is shaking, he doesn’t believe he can win