Here is a selection of quotes from today’s event:

FRANK WARREN: There is a lot on the line. It was very unfortunate how it panned out for Daniel against Joe Joyce, but he is a young man and still has a lot to give. It is for Daniel to show he is the man coming through, and we will find out more on Saturday. He is up against a very tough opponent, and looking at Bogdan, he appears as fit as a butcher’s dog. We have two big, very fit, and hard-hitting heavyweights here, and you will see something special. I hope it goes the way we want, and Daniel re-establishes himself. The winner will be in good stead to fight for the WBA title fight at some time next year. Although we’re only allowed 1000 fans in, the atmosphere will be great, and it is brilliant that they’re back.

FRANK ON TOMMY FURY: You can play sport, but not boxing, and Tommy has the dedication, but he is still a novice and needs to learn his craft. If he keeps moving forward, he will get into a good position. He is not going to be rushed. His Dad won’t let me rush Tommy, and I’m not going to argue with him.

We will make the right moves at the right time. I appreciate what Jake Paul has done with no amateur experience and all these followers.

He has monetized that through boxing and good luck to him, but if he wants to fight Tommy, that fight is there every day of the week. The level Tommy is at now is a level above Jake.

If Jake wants that fight, he isn’t even pushing an open door. The hinges are off, and he just needs to walk in, and we will do it. I will carry Tommy there for the fight.

It’s a no-brainer, and the general public will watch it. Tommy also has a big following, is Tyson’s brother, and brings a lot to the table.

DANIEL DUBOIS: I have teamed up with Shane, and I believe I am better than before. I wanted to train with Shane. I believe he is a top trainer, one of the best, and has had World champions.

BOGDAN DINU: My experience will be the difference. I am happy to fight in the UK because it is the best place for boxing right now. I am happy to be here for a big fight. I have the opportunity to fight for this belt. It doesn’t matter who the opponent is. I am coming to win, take the belt and go home.

TOMMY FURY: Miami was unbelievable with Tyson. Whatever he does is big and huge. The real reason I went was to gain world-class experience. 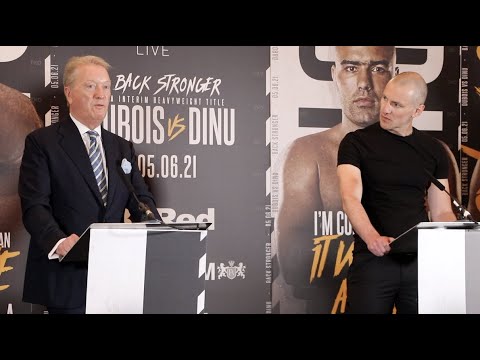 It was a great experience because you would walk in a gym and be surrounded by world-class. It has benefitted me as a fighter. Being with Tyson is motivation, and if I apply myself, I can get to that level. No one puts a gun to my head, saying I have to box on Saturday.

I do it because I love it. I set myself a goal as a very young lad, and I will see that goal out. It is going to be a long hard road. You’re going to get hit harder than anyone else can hit you, but I am ready to get back up and keep going.

He has earned a lot of money, and if there were any chance of Tyron Woodley beating Jake Paul, that contract wouldn’t have got signed.

Why would Jake Paul put himself in a position where he is going to get knocked spark out? He is not going to fight anybody who will test him because he doesn’t need to.

He is making a fortune from YouTube. Why is he going to get his teeth knocked out for nothing? These MMA guys will fight him all day.

They earn £300,000 for MMA and can get three or four million for fighting him. If it comes, it comes because it is easy money. I am not going to focus on Jake Paul.

Saturday night is where my mind is, and I have a job to do. I want to show improvement, and that is what you are going to see on Saturday. I put my heart and soul into this.

As long as I get the W and show even 0.01 percent of improvement in each fight, I’m happy. Why? Because I’m learning. I am going to dedicate myself to get there.

I have a burning desire to do it. It is great to be back in front of fans, and even if there were only five people, it would make a difference.

Other fights on the bill.


« Canelo fires back at De La Hoya after being criticized

Teddy Atlas: Floyd Mayweather is in danger against Logan Paul »