Jermall Charlo on Andrade and Benavidez: They have nothing to offer

By Dan Ambrose: Jermall Charlo says Demetrius Andrade and David Benavidez have nothing to offer him as far a fight goes. Those are fights that the fans want to see happen, but it doesn’t seem that either of them will happen given Charlo’s resistance.

Jermall only wants to fight the stars, Canelo Alvarez and Gennadiy Golovkin, but he’s not doing anything to raise his profile by taking on the stepping stone fighters Benavidez and Andrade to earn the right to share the ring with those stars.

WBC middleweight champion Charlo (31-0, 22 KOs) says the fights that he wants after he defends his title against #4 Juan Macias Montiel on June 19th is against Alvarez or Golovkin.

With Canelo, though, Charlo wants him to come down to 160 rather than him going up to 168 to fight him in his weight class.

Charlo, 31, says he doesn’t want to put himself at a disadvantage by going up in weight to super middleweight. If Canelo is willing to come back down to 160, Charlo says he’ll fight him in September.

Unfortunately, Charlo won’t be fighting Canelo in September, as the Mexican star is expected to take on IBF super middleweight champion Caleb Plant at that time if he defeats WBO belt-holder Billy Joe Saunders or whoever he faces this Saturday.

Charlo will be ignored until he changes his mind about not wanting to move up to 168 to take on Canelo and David Benavidez.

For now, Charlo is resistant to going up in weight to 168, which means he’ll be stuck fighting the no-name guys that he’s been facing since he moved up to 160.

It’s interesting that Charlo feels that Andrade and Benavidez offer him nothing, considering that he’s been facing exclusively obscure fighters since moving up to 160 in 2017.

“I fight who they put in front of me, so regardless I train hard for every fight,” said Jermall Charlo to PBC Podcast on his next fight against Juan Macias Montiel on June 19th. 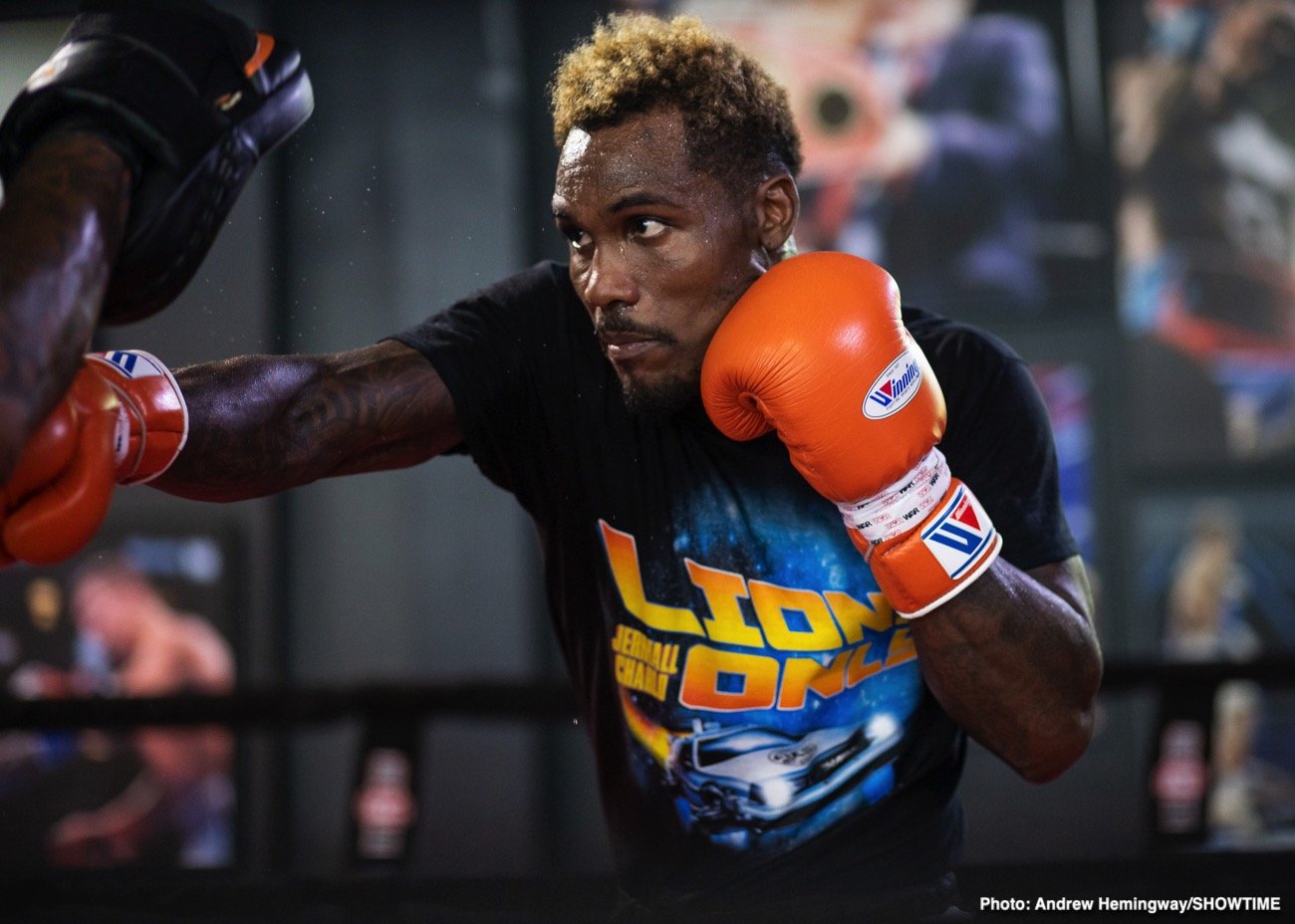 “I’m going to showcase my talent on June 19th on Showtime so you guys get a chance to see me again. I let my coach do the studying, but he [Montiel] deserves a shot.

Anybody that is going for a world title is going to fight for his left. I know he’s going to be prepared for war, and I will too.

A lot of people underestimated me and my skills against Derevyanchenko, so I had to go out and show my talent. That’s what I did. Two world titles, 22 knockouts, still being slept on, and one of the most feared boxers in the game,” said Jermall about himself.

“Every time I get up in the morning and I look at those world titles on the ceiling, [I think] there’s more out there, there’s more to come,” said Charlo when asked how he continues to stay hungry despite making millions.

“I’m hungry to consider myself one of the best in the world. I’m out to fight the best out there. That’s been the hardest achievement right now. My team has reached out to guys like Golovkin, Canelo, and Andrade. Whoever has a belt at 160.

“I’m obviously one of the top tiers in the division, so it’s not as if they can avoid me. But, of course, I’m one of the most avoided, but all I’ve got to do is keep fighting and keep winning.

With Charlo doing nothing to make a name for himself at 160 in terms of taking on risky opposition, it’s safe to say that IBF middleweight champion Gennadiy Golovkin will never fight him.

Jermall says Andrade and Benavidez have nothing to offer

“What I do is what I do for a living, and that’s fight,” said Charlo. “They’re doing a great job of keeping him active, I guess,” said Jermall when asked what his assessment is of Demetrius Andrade.

“He has great technique. He’s a durable guy, who can be in with a big puncher like me. He has one of those awkward styles that I don’t really see as a threat.

“Derevyanchenko posed a bigger threat than Andrade probably would. But being in a southpaw stance, it’s not so much about styles, it’s how can we get those match-ups to be made between two world champions and two unification bouts.

“You guys got to understand that,” said a defensive-sounding Charlo. It’s part of boxing. They’re watering the sport down. I care about Jermall Charlo.

“I got a big family, big life. He [Andrade] ain’t living nothing like me. The opportunity is for him. I’m the lotto ticket in this ballpark. Nobody knows Demetrius Andrade.

“I don’t know if he’s serious or not but I am. I am the champion of the world, and it’s going to stay like that. Jarrett Hurd poses not threat, and doesn’t have nothing to offer. Just like Benavidez, just like Andrade.

“The only thing that separates Andrade from the rest of the division is Andrade slipped up upon a title that nobody cares about. They want to see Jermall Charlo fight the best in the world.

“Do you think Jarrett Hurd is the best in the world? If I was to get a fight with Jarrett Hurd, they’d be like, ‘Oh, Jermall Charlo is fighting a guy that is coming off a loss’ and all this s***.

“They ain’t ever going to give my credit, so I’ll fight who they put in front of me,” said Jermall.

Benavidez and Andrade have a lot more to offer Charlo than the lackluster opposition he’s been feasting on since he moved up in weight four years ago.

With the easy money, Jermall has been making fighting on Showtime against fodder opposition for the last four years, it’s understandable why he would want no part of Benavidez and Andrade.

Why fight them when Showtime is paying you good money to fight middle-of-the-road opposition like we’ve been seeing from Charlo.

Charlo wants Canelo to fight him at 160

“We could fight for the Franchise for the WBC,” said Charlo when asked if Canelo Alvarez would have to come down to 160 to fight him or if he’d go up to 168. “We haven’t seen that in history before.

“Maybe he’s trying to psych Canelo out about the fight may not happen or maybe he’s trying to sound worried that he won’t show up prepared,” said Jermall when asked about his thoughts on Billy Joe Saunders making a big deal about the ring size for his fight this weekend with Canelo.

“Honestly, I don’t know,” Jermall Charlo about Saunders. “That’s something that’s questionable. Why would he complain about a ring? I don’t get it. This is the fight of your life.

“Billy Joe has never fought nobody. All those guys he fought over in the UK, he got some W’s over there. You in America now, stop complaining, shut up, get out and fight and let’s work. It’s time to work.

“He didn’t say that, he said it would be a good fight,” said Jermall when told that Canelo said that he wants to fight him. “He said it’s something the fans want, but he doesn’t know if he can come back down to 160.

“But listen, I still campaign at 160. Golovkin is still at 160. Maybe we [Canelo and Charlo] can work out something with a catch-weight, and they can still represent the title or something. I’m not into all that,” said Charlo.

It’s troubling that Jermall actually thinks Canelo needs to come down to 160 for him to fight him. That’s clearly a signal to the boxing world that Jermall wants no part of Canelo.

With that stance, Jermall will be ignored by Canelo for the remainder of his career as he is by Golovkin. But with the easy money Jermall is making fighting no-name opposition on Showtime, I doubt he’ll lose any sleep at never getting a fight against Canelo or GGG.

Jermall says Alvarez should fight him in September 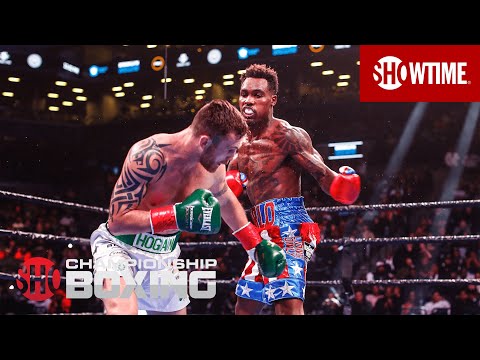 “Whatever they want. They’re going to try and put me in a situation where it’s not fair for me, and that’s why I’m prepared to be the most comfortable in the most uncomfortable position, and if that takes me fighting the guy I’m fighting on June 19th [Montiel], that’s what I’m going to do.

“I’m here to win, I’m here to take over the world. In boxing, it’s not that hard to make a fight. They make fights every day,” said Jermall.

It’s hard to know if Charlo is serious about wanting Canelo to fight him in September or deluded. He’s got to know that Canelo plans on fighting Plant in September, so it seems like a PR move on Charlo’s part to say that he’ll be ready to fight him then.

“Whatever makes Canelo happy,” said Charlo when asked if he’d entertain fighting Canelo at a 164 lb catch-weight. “Just get in the ring with Jermall Charlo and have the fans shut up.

“I got the belt, he don’t got no belt,” said Charlo. “He has no belt, no title, nothing to offer, said Jermall about Benavidez.

“He’s a two-time cheater, and you want me to go way up there and fight him. I’ll do the s***, but does it make sense? Who’s controlling it? 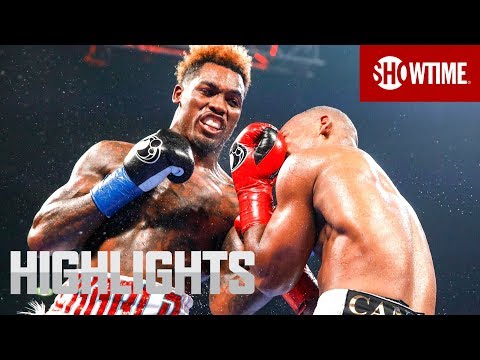 “I could have fought Canelo at 154 when he was fighting then,” said Jermall. “He fought my gym-mate,” said Charlo.

As long as Jermall has no desire to go up to 168, he’s safe from having to fight Benavidez or Canelo. He can continue to tell his fans that he campaigns at 160, and hopefully, they’ll buy that excuse and not view him as afraid of taking risks.

It doesn’t matter what Charlo says at this point because the fans already view him as a ducker. The only way to turn that view around is for Jermall to go to up to 168, but it seems he has no interest in doing that.


« Dubois Vs Dinu For WBA Interim Title On June 5

Anthony Joshua: I’m everything Tyson Fury wishes he could be »