Anthony Joshua: I’m everything Tyson Fury wishes he could be

By Charles Brun: Anthony Joshua says Tyson Fury wishes he had a great body like his. Fury (30-0-1, 21 KOs) makes a big deal about how he drinks pints as if to let fans think that he doesn’t care about his physique, but he clearly does, according to Joshua.

AJ says Fury knows he can’t slack off for their fight and expect to win, which is why he’s working hard trying to trim down.

Not surprisingly, Fury let himself get out of shape during the pandemic, and he’s had to work hard recently to trim off all the pounds that he’s packed on.

With the Joshua-Fury fight potentially taking place in July or August, Fury has a lot of catching up to do for him to get to the sharpness level that Joshua is at.

“The man will talk about drinking pints, and he’s not interested, yet he wants to look chiseled,” said Joshua to Deeney Talks in analyzing Fury.

“But ‘AJ has a good body, and he’s a bodybuilder.’ It’s psychological warfare. He [Fury] wants to have a six-pack. I am everything he wants to be.”

If the two heavyweights were to fight tomorrow, Joshua would likely obliterate the flabby Fury, and it wouldn’t be a pretty picture.

In a recent video clip that Fury posted last week on social media, he looked slow, weak, and fat around the middle in working out on the mitts.

You hate to say it, but Fury looked like he aged five to seven years in the last year. The way Fury looks now, he has a dad’s body of a middle-aged non-athlete. He no longer looks like the guy that clubbed his way past Wilder a year and a half ago.

It doesn’t appear that Fury will be able to get back to that form, and even if he can, he’s not going to beat Joshua with rabbit punching.

“The reason he [Fury] is saying he’s drinking 12 pints is he knows he could never do that to fight me,” Joshua continued.

Of course, Fury knows he can’t go into the Joshua fight looking like a fat slob. Joshua would destroy the Fury that we’ve seen cruising around Las Vegas in his designer shirts, looking as if his mind is elsewhere.

Fury looked so bad in a recent video of him working out with trainer Sugarhill Steward. Frankly, it was disturbing, particularly when comparing it to how sharp former WBC heavyweight champion Deontay Wilder looked in a similar mitt session.

If Fury’s fight with Joshua falls through, he could be barking up the wrong tree if he takes on the talented 6’7″ Deontay.

To look at the two fighters, one would conclude that Wilder was the winner of their clash last year rather than the flabby, slow and weak-looking Fury. 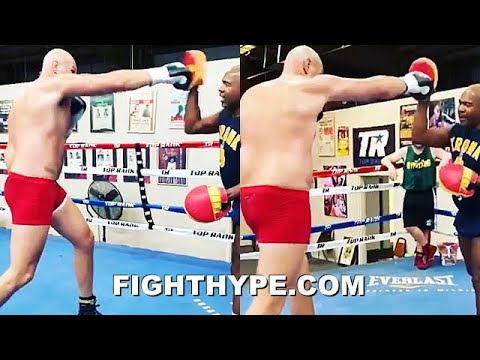 It’s crazy how bad Fury looks not after taking it easy for a year and a half. Just looking at the video, it appears that Fury has been padding himself on the back after his victory over Deontay in February 2020,

This isn’t surprising to Charles Brun, though, as we saw the same thing from Fury after his upset win over Wladimir Klitschko in 2015.

After beating Wladimir by a close 12 round decision, Fury lived it up, partying and eating like mad, ballooning up to close to 400 lbs.

Although he didn’t get as fat after his win over Wilder, he still put on a lot of weight, and it looks like he’s not going to be able to take all of it off this time.

As the saying goes, you can only ‘go to the well too often’ before you get diminishing returns.

With this yo-yo pattern of weight gain and weight loss we see from Fury, he’s following Ricky Hatton’s footsteps and every athlete who has ruined their careers by slacking off. 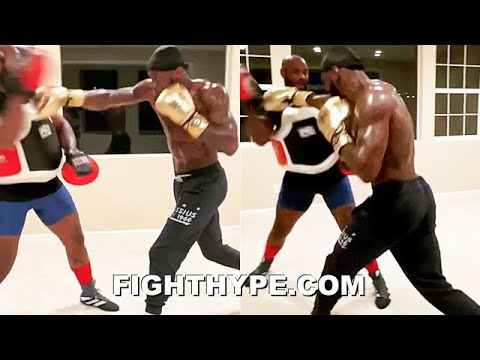 “You’re getting smashed mother f****,” said Fury in sending a message to Joshua on social media on Wednesday.


« Jermall Charlo on Andrade and Benavidez: They have nothing to offer

Confirmed: Ramirez vs Taylor, Stevenson vs Nakathila, Inoue vs Dasmarinas & Lomachenko vs Nakatani »