Dubois Vs Dinu For WBA Interim Title On June 5 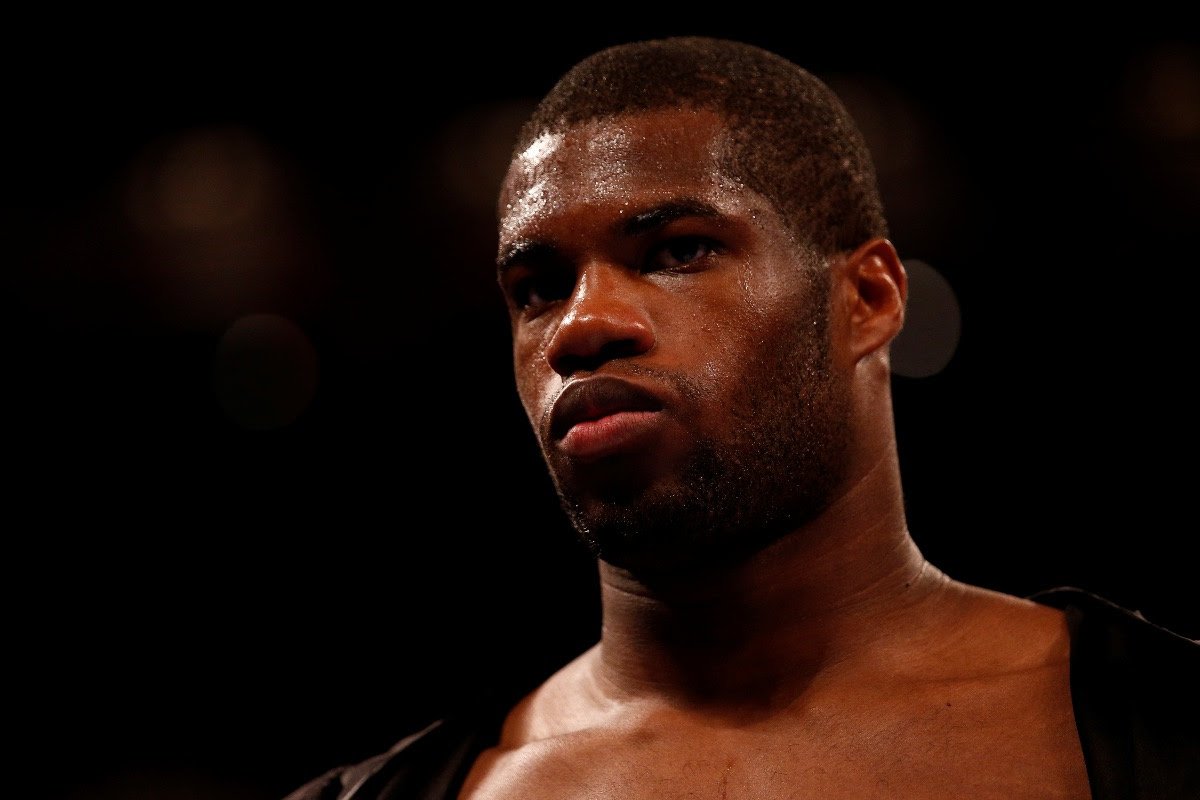 DANIEL DUBOIS WILL make his long-awaited return to the ring on Saturday June 5 with a challenge for the vacant WBA Interim heavyweight title against the towering Romanian Bogdan Dinu.

The 23-year-old Dubois was last in action at the end of November 2020 in a multi-titled collision with fellow Brit Joe Joyce in London. An absorbing battle came to a halt when Dubois, who suffered a horrific eye injury, removed himself from further danger by taking a knee in the 10th round.

It was later confirmed that he had sustained significant damage to his orbital bone and taking himself out of the firing line almost certainly preserved his career and protected against an even more serious injury.

Having now been given the all-clear from specialists, the 15-1 Dubois is ready to pick up where he left off prior to the Joyce fight and get back into the business of winning titles. Dubois is formerly the holder of the WBC Youth world, the Southern Area, English, British, WBO European, WBO Global, WBO International, Commonwealth and WBC Silver belts.

Dinu, 34, from Bucharest, holds a record of 20-2, with 16 of his wins coming via knockout. The 6ft 5″ puncher, ranked #2 by the WBA, returned to winning ways with two KO victories after suffering his only career losses in the USA when he went up against the unbeaten ex-contender Jarrell Miller and the hugely experienced campaigner Kubrat Pulev.

The show will be co-promoted by Dinu’s US promotional vehicle, Greg Cohen Promotions.

“I am excited to be back in the ring on June 5 after the frustration of being kept out of the gym and doing what I love to do for a number of months after my last fight,” said Dubois.

“This is my chance to remind people of what I am really about, which is winning fights in a devastating fashion. I don’t need to make any excuses for the Joe fight because everybody could see the issue with my vision, but Joe won fair and square and we move on.

“Time is on my side but I don’t intend to slow down my progress and I am more than happy to be returning to the ring in a big title fight that puts me right back in the picture.

“I respect Dinu and accept that he could provide a tough test, but I can only see one outcome and that is me leaving the ring with another major championship belt for my collection.”

Dinu, who last fought in October 2020 with a second round stoppage, said: “This is the most important fight for me and I will be prepared for a war in the ring. It’s my perfect moment to win and to get to the big fights. I’m fighting in London to become the first Romanian heavyweight champion of the world.”

Promoter Frank Warren added: “I’m delighted to get this fight over the line for Daniel and really pleased to be working with Greg Cohen on this event. A win for Daniel in this Interim title fight will see him become the mandatory challenger for the WBA world title and, if he can get past Dinu on June 5, he is back in contention and right in the mix with the top contenders.

“It is an opportunity for Daniel to post a ‘business as usual’ statement to the public and the rest of the heavyweight division following his setback against Joe. Daniel’s enthusiasm to reach the very top has not diminished in the slightest and, even though it is a bit of an old cliche, it is true that he will only learn and benefit from the experience of taking a first loss and rebuilding from it.

“Dinu is a high quality and respected opponent who in no way can Daniel take lightly. It is exactly the sort of challenge he needs at this stage in his career. Daniel achieved so much, so early on his professional journey and remains so young in heavyweight terms.

“There will be significant pressure on Daniel coming back after a first defeat and the focus will be right on him to see how he reacts. He is returning in a big fight, everything will be on the line and the prize on offer is a shot at the world title.”

Greg Cohen, founder and CEO of Greg Cohen Promotions, said: “This is the career defining bout that Bogdan Dinu has been waiting for his entire life. The opportunity to not only fight for, but WIN a WBA Heavyweight Title, against a top rated and well respected fighter in Daniel Dubois will put Bogdan at the top of the heavyweight division and open the doors to mega fights for him in the near future. His entire team has been assisting him in preparing for this moment and he will undoubtedly seize the moment. It won’t be easy, but the years of hard work, sacrifice and experience are going to pay off.

“I’d like to thank the entire team at Queensberry for their professionalism and assistance in making this bout a reality. I’d also like to thank Sorin Florea, Bogdan’s long time manager from Romania who’s support, attention to detail and class are always instrumental and appreciated. We look forward to a great night of boxing and a spectacular heavyweight matchup!”

DANIEL DUBOIS TAKES UP PETER CROUCH’S OFFER, WILL BE “BACK STRONGER”

Heavyweight superstar ‘Dynamite’ Daniel Dubois has taken up an offer from England football legend Peter Crouch to use his popular podcast’s catchphrase ‘Back Stronger’ as the tagline for his next fight.

23-year-old Dubois meets the WBA’s #2 ranked Heavyweight Bogdan Dinu on June 5th and ‘Back Stronger’ seems the perfect fit for the Greenwich man’s return as he looks to rebound after a horror eye injury suffered at the hands of Joe Joyce.

On the latest episode of ‘That Peter Crouch Podcast’, Dubois asked presenters Crouchy, Chris Stark and Tom Fordyce what they made of internet trolls targeting him for taking a knee in his last fight.

Fans of the podcast will know that Peter Crouch has become an expert in judging the art of what he calls ‘sh*thousery’ and he strongly rebuked boxing’s armchair army when he confidently declared “there’s no sh*thousing there, let’s be honest.”

Crouch added: “I think we should get behind him!”

Co-host Tom Fordyce came up with the idea of the podcast offering formal support to Dubois’ as he mounts his comeback by letting him use their ‘Back Stronger’ catchphrase.

Talking exclusively to Queensberry, Dubois said: “It’s nice to have the support of someone like Peter Crouch. He’s competed at the top level of his sport, represented his country and been the subject of abuse himself. He knows what it’s like to be injured too, so yeah obviously it’s nice for someone like that to back you up.

“I listened to what the guys had to say and I’m happy to take them up on their offer.

“Back Stronger seems like the perfect title for my next fight. Because I will be, I’ll be back stronger. On June 5th, I get back in the ring and take my frustrations out on Bogdan Dinu.

“It’ll be back to what I do best, an explosive performance and a devastating knockout.”

It’s been a rough couple of months for Dubois, who prior to the Joyce defeat was widely considered to be the hottest prospect in Heavyweight boxing.

Despite withstanding a barrage of abuse from internet fans, and some within boxing too, ‘Dynamite’ says he’s still laser-focused on achieving his goals in the sport and reaching the dizzy heights many had predicted for him.

“It’s strange having people slag you off just for getting injured. I’ve never experienced that before. But, It’s boxing… it’s a tough sport, and I’ve dusted myself off, I’ll go again and prove everyone wrong.

“I don’t care what critics have to say to be honest. I’ll just come back, win fights, win titles and shut them up.”

That sentiment was backed up by Chris Stark, who said on the podcast: “I’ve got no doubt at all he’ll be back stronger for his next fight.”

Peter Crouch added: “He was on the right track, obviously he’s lost his way in the last fight, got beat… but all he’s got to do is come back stronger.”

Perhaps unconvinced that KO-artist Dubois would actually take them up on their offer, Crouchy did go on to say that “If I actually see, in the build up to this fight, ‘DUBOIS: BACK STRONGER’, it’s going to really make my day.”

Well, Crouchy, consider your day made…

‘BACK STRONGER: DUBOIS vs DINU’ IS LIVE ON BT SPORT 1 HD ON SATURDAY JUNE 5th.


« Hatton: “I knew at the time Canelo was going to have a special career”

Jermall Charlo on Andrade and Benavidez: They have nothing to offer »