Gervonta Davis willing to fight Ramirez vs. Taylor winner if his promoters green light it

By Sean Jones: Gervonta ‘Tank’ Davis says he’d be willing to fight the winner of this Saturday’s 140-lb championship clash between Jose Ramirez and Josh Taylor if he wins his fight against Mario Barrios and his promoters give him the green light to take it.

Davis, 26, is being asked a lot by boxing fans if he’s willing to fight Ramirez or Taylor because he’s moving up to 140 to challenger WBA ‘regular’ light-welterweight champion Barrios (26-0, 17 KOs) next month on June 26th on Showtime pay-per-view at the State Farm Arena in Atlanta, Georgia.

Considering that Barrios is viewed a the secondary WBA 140lb champion below WBA Super World champion Josh Taylor, the logical question to ask Tank Davis is whether he’s willing to go after the main WBA belt at 140 rather than the secondary strap against.

There’s nothing wrong with Barrios as a fighter, but many boxing fans view him as the weakest link among the champions at 149.

“I’m not even thinking about that,” said Gervonta Davis when asked by Fight Hype if he’s thinking about fighting the winner of the Josh Taylor vs. Jose Ramirez fight.

“The main focus is Mario Barrios, but in the future, I didn’t know they were fighting. I’m all for it if my team is with it, I’m all for it,” said Davis about him fighting the winner of the Taylor vs. Ramirez clash. “I’m a team player,” said Tank.

Interestingly, Tank didn’t know that Ramirez and Taylor are in action this weekend. How could Tank Davis not know those two are fighting?

Was the former two-division world champion Davis (24-0, 23 KOs) being deliberately obtuse so he wouldn’t have his feet put to the fire about fighting the Ramirez-Taylor winner?

“I would love to fight either one of them, but right now the only name I’m worried about is Gervonta Davis, and it’s going to stay that way until June 26th,” said Barrios when asked about his thoughts on fighting the winner of the Jose Ramirez vs. Josh Taylor fight.

“He has a tough a** fight on front of him on June 26th,” said Mayweather Promotions CEO Leonard Ellerbe about Tank not focusing on facing the winner of the Ramirez vs. Taylor fight. “Barrios is no joke.

“It’s a dangerous fight; let’s call it what it is. This man [Tank Davis] is chasing history. He’s moving all the way from 130 to 140, and when you look at that division [light welterweight], there are a lot of good fighters out there.

“It’s a dangerous fight, and not one where I would say, ‘Let’s go do that,'” said Ellerbe about Tank Davis fighting Barrios.

“He wanted to do it, and me and Floyd [Mayweather Jr] and Al [Haymon] support him 1000% in what he does, and we believe in his ability. But let’s call it what it is. Mario Barrios is no joke.

“He’s a big 140-pounder, he’s super tall, and he’s got great reach. So Tank has got to find a way to figure it out, which I’m confident he’ll get it done, but it won’t be easy,” said Ellerbe.

The way that Ellerbe was fast-talking when asked about Gervonta fighting the winner of the Ramirez vs. Taylor fight, one can only view that as a signal that he has no interest in making that match. 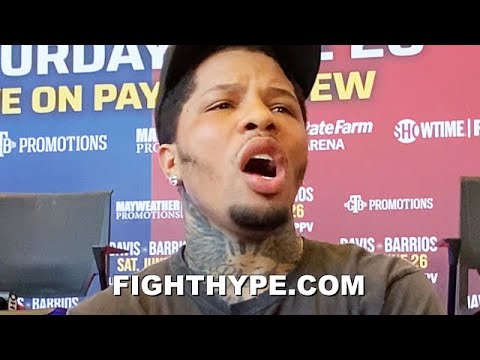 
« Josh Taylor: I outmatch Jose Ramirez in every department