Josh Taylor: I outmatch Jose Ramirez in every department

By Jeff Aronow: Josh Taylor views Jose Ramirez as someone that is a one-dimensional come-forward type of fighter that doesn’t know how to fight in any other style. Taylor believes he’s more than a match than the 28-year-old Ramirez in every department and views this as an easy fight for him.

The last fight for the 2012 U.S Olympian Ramirez against Viktor Postol was not the type of performance he needed to be viewed as having a shot at beating Taylor.

Who knows? It could have been just an off night for Ramirez or a bad style match-up. Ramirez barely beat Postol by a 12 round majority decision last August. Ramirez dealt with Postol was far different from Taylor, who beat him easily by a 12 round decision in 2018.

Ramirez to show Taylor he can box

“I’m honored to fight a guy like Josh Taylor, and I want to face the best version of him,” said Jose Ramirez to ESPN. “That’s the guy I want to beat on Saturday night. I’m going to try and beat him in every single way,” Ramirez said when asked, ‘How are you going to beat him?’

“Most people forget my amateur background. I became a USA Olympian. I think fighters like Josh. I have the rhythm to adapt, but I just feel that in a lot of my fights, there was no need.

“I just felt that I was on another level, so there was no need to show too much to get them out of there.

“A guy like Josh Taylor is going to bring the best out of me, and you’re going to see on Saturday night, my skills on display and the angles.

“You’re going to see that I’m not just an aggressive fighter that a lot of people think I am. I’m aggressive, but I’m also very smart with the way I put pressure,” said Ramirez.

It’s late in the game for Ramirez to be switching his fighting style from being a come-forward pressure fighter to that of a boxer. If Ramirez chooses to box Taylor on Saturday, he’ll be fighting his fight style, and it could go badly for him.

“You’ll see on Saturday how I’m going to beat him, but I have absolutely no doubts,” said Josh Taylor to ESPN. “I know exactly what he’s going to bring on Saturday.

“He’s going to come forward and try to put me under pressure against the ropes. That’s all he’s banking on. He only knows one way of fighting, and that’s coming forward and putting the pressure on.

“I can out-match him in every single department. I’ve only seen him fight one way in all the fights of his I’ve seen. He’s very good at one he does, a come-forward pressure fighter, but it’s the only thing he knows how to do.

“It’s the only way he knows how to fight, and it’s going to come unstuck on Saturday, I believe. He’s up against a better opponent, a guy that is better than him in all the departments.

“I have to go and prove it, but I fully believe in myself 100% that I’m going to win this fight on Saturday. 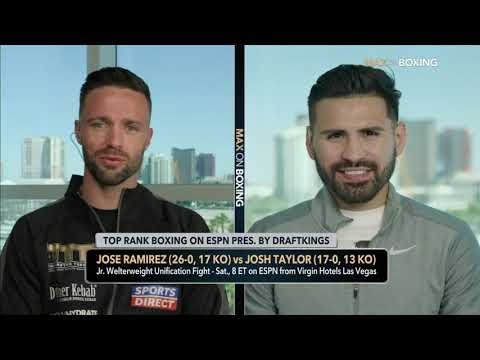 “I have no doubts in my mind. I think it’s going to be a great fight, but I think I’m going to knock him out on Saturday,” said Taylor.

That will be a huge accomplishment for Taylor if he’s able to knockout Ramirez.

Gervonta Davis willing to fight Ramirez vs. Taylor winner if his promoters green light it »