Brian Viloria: Lord of the Flyweights 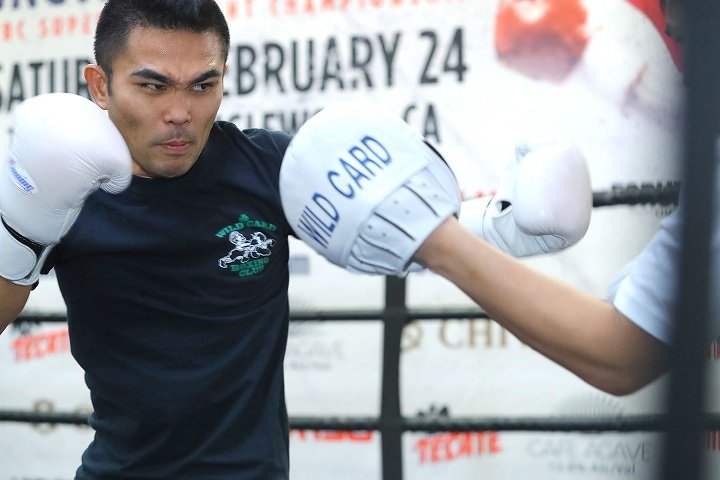 Exclusive interview by Ian Aldous: A decorated amateur career full of titles that culminated in becoming an Olympian, and four world championships across two weight divisions as a pro; Brian Viloria (38-6), who has lived and breathed the sport for almost his entire life, is the epitome of what any boxer should aspire to be and emulate.

Born in Hawaii, Viloria moved to the Philippines to live with his grandparents before his first birthday. He returned aged five and his journey to pugilistic glory commenced. Compiling a record of 236 wins with around 8-9 losses, that included victories over Nonito Donaire and Ivan Calderon, ‘The Hawaiian Punch’ captured the 1999 light-flyweight amateur world crown defeating the 1996 Olympic champion, as well as the eventual 2000 Olympic champion, on his way to the gold medal. Unfortunately, despite entering the 2000 Olympic Games as the favourite to claim gold, he exited in the second round, and it was time to turn pro.

Winning seventeen of his first eighteen contests, the only blemish being a no-contest, Viloria landed his first world title shot in the late-summer of 2005. Viloria devastatingly ripped the WBC 108-pound strap from Eric Ortiz inside a round. He had arrived on the world scene, but a potentially tragic result in his prior fight almost led to him prematurely retiring.

“I had an opponent by the name of Ruben Contreras that was rushed to the hospital and in a coma for several weeks because of a brain haemorrhage,” the forty year-old explained to me. “And for the entirety of that whole ordeal – I was contemplating whether I was going to hang the gloves up depending on if he was going to live or die.”

“I wanted to be a fighter, but not to take a husband or someone’s father away from them,” he expressed soberly.

Viloria was ready to quit had Ruben passed, but thankfully the Mexican survived. He gave Brian his blessing to continue and was actually at ringside that night; they even embraced pre-fight in an emotionally charged moment, mere minutes before the world title was Viloria’s.

The proud Hawaiian defended the gold once before Omar Nino Romero impressively took it from him over twelve-rounds. In the rematch, just three months later, they couldn’t be separated and fought to a draw. However, Romero failed a post-fight drug test, bizarrely testing positive for methamphetamine, and the result was changed to a no-decision. Had he been doping in their first clash too?

“I don’t know if he was high during the fight or whatnot, but I remember dropping him in the second fight and he bounced right back up,” he said. “I was like, ‘what the heck?’ I could feel the whole impact on my arm. How the hell did he just get back up again?

“I hit a little bit of depression after that fight when I lost the world title because when you’re on top of the world and you come crashing down – how am I going to get back from this?”

There was no need to worry. Years later he would earn his revenge against Romero and hit even loftier heights as a pro. At this time, he made the difficult decision to depart the Wild Card gym and the tutelage of Freddie Roach. The legendary trainer was extremely busy looking after Manny Pacquiao; Viloria left on good terms. He switched to Oxnard and linked-up with Robert Garcia after nine years with Freddie. The road to his second world title spluttered when he suffered a razor-thin majority decision loss for his old title versus Edgar Sosa, and subsequently went through some unusual venues, but the desire to reach the summit consistently remained.

“I was fighting in a Swap Meet parking lot in eastside Los Angeles and it was pouring rain,” Viloria said setting the scene, “(with) about twenty people in the crowd because nobody wanted to get wet (laughs), and the parking lot was flooded.”

The surface water was so bad that Viloria’s corner team even lifted and carried him to the ring.

“The twenty people got entertained (laughs) and I won the fight,” he continued. “Next thing you know, I’m going to be fighting for the world title again against one of the legends of Mexico by the name of (Ulises) Solis.”

Solis had held the IBF light-flyweight world championship for three years and had successfully defended it eight times. Viloria knocked out Solis in the eleventh-round of a pulsating match that breathed new life into his career. He would, in a startlingly similar fashion to his first world title reign, defend the belt once before dropping it in his second defence. On this occasion, Carlos Tamara agonisingly stopped the champion with just 75 seconds left in a fight that Viloria was winning on two of the three scorecards at the time. He also split with Robert Garcia following the defeat.

A move up to flyweight turned out to be the direction that ignited Viloria’s greatest run. Two wins earned him a shot at the WBO’s flyweight king, Julio Cesar Miranda. A unanimous decision brought him his third world crown and started his run of epic title defences. Giovani Segura, ranked in The Ring’s pound-for-pound top ten at the time, was stopped inside nine rounds; Omar Nino Romero (remember him?) was beaten inside ten rounds, and the WBA’s flyweight championship was subsequently added to his WBO strap when Hernan Marquez was TKO’d inside eleven rounds. According to the Ring, Viloria thus became the first unified flyweight world champion since 1965.

He was in the form of his life and producing epic championship bouts, yet still the big U.S. television networks weren’t interested in broadcasting fights in the lightest weight-classes. Viloria had to settle for his fights being broadcast on minor networks and pay-per-view.

“I was at my peak at that time and still the networks didn’t want to put us on TV,” he admitted. “That was frustration on my part; what will it take for them to even bat an eye towards the situation?”

“Should I start dressing up as a clown or become a villain (laughs)? You see the level of frustration I had. You’ve just got to keep plugging along and put up great fights and have the die-hard boxing fans fall in love with you because they love the fights that you’re putting on.”

Thankfully in today’s landscape, DAZN are doing an exemplary job of showcasing the lightest weight-classes and the fast-paced excitement they bring. Viloria would have been a perfect headliner for the online subscription service and its worldwide audience.

“We were putting up amazing fights, but it was so under the radar,” he said frustratingly. “Nobody knew about it. If you were a die-hard fan, you understood what was going on in the lighter weight divisions.”

Viloria vs. Marquez shared the headline act with Roman Gonzalez vs. Juan Francisco Estrada 1, both fights providing a precursor of what was on offer below 118-pounds. In 2021, Gonzalez vs. Estrada 2 headlined on DAZN.

“It was a shame at that time that HBO or Showtime didn’t pick it up because they would have had a crazy night of boxing in the lighter weight divisions. It was frustrating being a lighter weight and nobody really giving a second glance. When I say nobody, I mean the heads of the big networks.”

“I think I started my career at the wrong time,” he says with a rueful chuckle.

Rewinding to 2013, he would proceed to drop the unified gold via split-decision to current-day reigning super-flyweight unified king, Juan Francisco Estrada. Two years later at Madison Square Garden, Nicaraguan legend and four-weight world champion, Roman ‘Chocolatito’ Gonzalez would halt Viloria and illustrate his greatness by dropping Viloria – the first opponent to achieve that feat in more than 280 professional and amateur fights.

“I just wish I was five years younger. I was coming towards the twilight of my career at that time. I tried my best with what I had left. For me, I feel like the fight got stopped a little too early.”

He was heading for the exit and something was missing from his final few bouts. His body was informing his brain that it was time to walk away. A listless decision loss in his final world title clash to Artem Dalakian spelled the end.

“In the beginning of my career, I promised myself that if there was a little step that I lose – that’s it, that’s going to be my career.”

“I think in my last couple of fights, especially after my last fight, I could see the shot and the opening, but I couldn’t get to it in time the way I always used to.”

He knew he was slowing down and walked away at the right time. He told his wife it was time, to which she replied, ‘thank God’. There was nothing left for him to prove.

“Looking back, I have no regrets on doing anything,” Viloria reflected. “I did my best and I gave my best to the sport.”

It was time to share all the experience or “data” as he referred to it, that he gained, to the next generation. From young children to white-collar workers and amateurs to world champion fighters, Viloria is delighted to be on the other side of the ropes teaching the willing learners.

After a lifetime spent in boxing, Viloria is now happy and content raising his son and daughter; spending as much time with them as possible.

“I feel so much more at peace and free to do the things I want to do; spend more time with the kids and the family, but still be in the craft as a trainer in the thick of things when called on,” he mused. “It’s not like I entirely segregated myself away from the sport. I’m still in the thick of things in a different form.”

A life being paid to punch is anything but a regular 9-5, it’s now time for him to enjoy the fruits of his career and experience a somewhat ‘normal’ life.

“Let’s go start chapter two of my life. I love the normal life.”

Boxing was his life since the age of five. The decision to leave was incredibly difficult as has been proven with a plethora of boxers over the years, who aren’t ready to retire and pine for ‘one more fight’. Those thoughts did enter his mindset, but he’d mentally prepared for retirement for a long time.

“There is life after boxing, but you have to make it the way you want it to.”