By Jeff Aronow: Teddy Atlas predicts that the 42-year-old Manny Pacquiao will be sent into retirement by Terence Crawford if that fight comes off next.

Atlas feels that the pound-for-pound star Crawford (37-0, 28 KOs) is too good for the former eight-division world champion Pacquiao (62-7-2, 39 KOs) right now and end well for Manny.

Teddy points out that Pacquiao will have been out of the ring for two years by the time he fights Crawford, and that’s not the ideal situation. Not only will Pacquiao be much older than Crawford, but he’ll be dealing with ring rust.

The Pacquiao vs. Crawford fight is expected to take place in June in the Middle East. According to Atlas, they’ll both make a lot of money, but it’ll end badly for Pacquiao.

“I hate to see him go out that way. I think Crawford is the best pound-for-pound fighter in the world. He’s got great trainers, he knows how to control distance and shorten up his game and go in there and throw short punches on the inside to hold the trenches if he has to.

“He reminds me of Sugar Ray Leonard, but he was a mean guy when it came down to the fight. Crawford has that streak in him. I think at this point in Pacquiao’s career at 42, but I think it’s the wrong fight for him.

“I know the money has got to be right. If the money is right, it’s going to be in the Middle East.

“They’re looking for a place to put it. It’s going to have to be in Abu Dhabi because the money is going to be there.

“With Pacquiao, he’s so special. It’s not just the money. He’s going to believe he’s going to win the fight because he’s special.

“I just think Crawford is the wrong style, the wrong talent at this point in his life for Pacquiao,” said Teddy.

Atlas might prefer that Crawford fight Errol Spence rather than Pacquiao, but the two champions can’t agree on the purse split.

Crawford doesn’t want to take the smaller split, even though he won’t receive parity with Pacquiao either.

“I think he can take advantage of timing Pacquiao,” continued Atlas. “Pacquiao was so fast, he’s still fast. He was so quick, not only with his hands but with his feet to close the gap, where he could do things wrong and make them right.

“He could break rules, he could run red lights and get away with it before the car came and crashed into him. I don’t know that he can do that anymore.

“When he looks to run the red lights and start from too far away, Crawford might time him on the way in. There might be a car crash. He might pay for running that red light, whereas in the past, he didn’t pay for it.

“He paid for it once against Juan Manuel Marquez once, and he got knocked out cold. But he came back magnificently after that and had a big part of his career after that. I just think this could be the wrong one [for Pacquiao against Crawford],” Teddy said.

If the fading Floyd Mayweather Jr was able to time Pacquiao six years ago in their ‘Fight of the Century’ in 2015, Crawford, 33, should be able to do the same. Pacquiao is predictable with the way he comes charging in to try and land his punches.

He doesn’t have the size to stay on the outside to fight taller opponents like Crawford, so it’s likely that he’ll charge him the way he has all of his opponents.

If Crawford is able to time Pacquiao, he may end up knocking him out cold in the same way Juan Manquez Marquez did in the sixth round in December 2012.

“I don’t want to hear ‘the [Spence vs. Crawford] fight came five years too late,'” said Teddy. “I think that’s probably what we’re going to hear if this fight takes place.

“Being that it’s Pacquiao and people want to see Crawford fight a name, people will watch it. Listen, it gets the job done with Top Rank, they’re having trouble with Crawford.

“He was looking to leave them, but he’s signed to a contract and he’s not happy. He’s made it pretty public with them in the past that he’s not happy with them.

“He got paid to sign a renewal, an extension of the contract. He did, he’s still there. This is a way for Arum of having his cake and eating it too.

“He keeps him there a little bit longer, and he satisfies him by giving him a big-name fight, a fight that is very winnable because it is a big name and a fight that he’s going to get paid a lot of money.

“And I just hate to see a special guy [Pacquiao], but it happens to many of them. I hated to see Muhammad Ali go out against [Larry] Holmes, and I love Holmes.

“I hated to see Joe Louis go out against Rocky Marciano, but that wasn’t Joe Louis anymore.

“That wasn’t close to Muhammad Ali when he fought Larry Holmes. Maybe Pacquiao is different. I don’t know if it’s going to be Pacquiao anymore when he fights Crawford,” Atlas said.

If Top Rank promoter Bob Arum can get the Pacquiao-Crawford fight signed, he would be giving Crawford the match he’s been looking for his entire 13-year professional career. In turn, that would increase the odds of the Nebraska native re-signing with Arum’s company when his contract expires in October.

Manny= the same fighter he was against Thurman

“That was two years ago,” said Atlas bout Pacquiao’s last fight against Keith Thurman in July 2019. “That was extraordinary, but that was a different guy then.

“Thurman is a terrific fighter, but Thurman was coming off a couple of years of being out with his injuries and surgeries.

“He had one fight before that [against Josesito Lopez], and he didn’t look good. And he fought a game guy, but he got hit with punches, he got hurt.

“He looked like he needed two more fights before he fought a top fighter again.

“Instead, he fights Pacquiao and Pacquiao beats him. I’m not taking anything away from Pacquiao, but Thurman was different than Crawford’s going to be,” said Atlas.

Pacquiao isn’t the same fighter he was the last time he fought against Keith ‘One Time’ Thurman almost two years ago in July 2019, according to Atlas.

The near two years that the 42-year-old Pacquiao has been out of the ring since his hard fight with Thurman isn’t going to do him any good. It’s not just Atlas that believes Pacquiao will have issues with ring rust.

There are a lot of boxing fans that expect Pacquiao to be at less than he was in his last fight, and that’s why think he should take an easier fight. The Filipino star likely won’t do that, though, because the money won’t be the same. 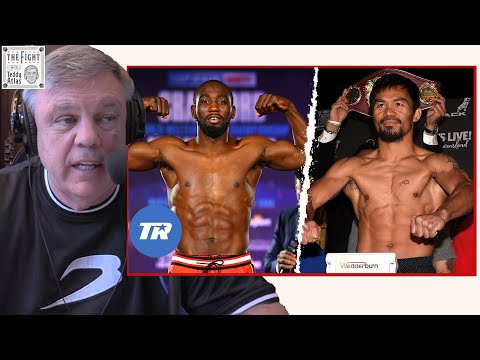