By Sean Jones: Oscar Valdez says he’s got his eyes on a unification fight against WBO super featherweight champion Jamel Herring next.

It should be little more than a formality for the match to get put together. This is a “logical” fight to get made, says WBC 130-lb champion Valdez because he and Herring both hold titles at super featherweight.

Valdez says the reason he’s targeting the 5’11” Herring is that he holds the WBO title, and the boxing public is demanding it. If Shakur Stevenson were a world champion, he would be an option for Valdez.

Herring’s popularity is at an all-time high due to his sixth-round knockout win over former two-division world champion Carl Frampton on April 3rd.

Jamel surprised many boxing fans by going out and dominating Frampton, knocking him down twice to get the stoppage. Valdez is coming off an equally important 10th round knockout win over WBC super featherweight champion Miguel Berchelt on February 20th.

“Jamel Herring did his job really well; he’s still a champion,” said Oscar Valdez to Fighthub. “That’s the one that makes the most sense because we’re both with Top Rank. Why not unify?” said Oscar about him and Herring.

“People want to see that fight; let’s do it. We’re both champions. Let’s see who the bigger and better fighter is in the division. Of course, that would be the most logical fight, and, of course, we’ll take it.

“We’re just going to have to sit down with Eddy Reynoso and see how we’re going to win this fight,” said Valdez on the Herring fight.

“As I said before with Miguel Berchelt, no one is invincible. Everyone can make a possible mistake that can result in a win,” Valdez said.

The fans would prefer to see an action fight between Valdez and Herring rather than a cat & mouse involving the defensive-oriented Stevenson.

“Being a better fighter and not going to straight with a taller fighter like that,” said Valdez in how he’ll avoid falling into the same trap that Carl Frampton did against Herring.

“You got to watch out for the uppercuts. Jamel Herring has tremendous uppercuts. Obviously, you can’t go too straight with him.

He’s a tall fighter; he’s got that great advantage on him, he’s fast, and he can punch,” Valdez said about Herring. “It’s what the fans want, and it’s what we want as well,” said Oscar.

The short 5’5″ Frampton plodded forward against the taller 5’11” Herring, making it easy for him to land shots against him while he was on his way in.

Valdez is about the same height as Frampton, and he’s going to have to figure out a way to avoid getting hit while he’s moving into punching range.

“I’m not scared of fighting no fighter,” said Valdez when told that Shakur Stevenson has been talking about him on social media.

“Of course, Shakur Stevenson isn’t invincible either. There are things that will make us win the fight as well.

“Whatever fights in front of me, I’ll take them. I would like Jamel Herring because he has a title. You can tell he’s a very defensive fighter,” said Valdez about Stevenson.

“It’s the opposite of me. My style is more aggressive, and people like my style because of that. For the casual fans, they consider him [Shakur] a boring fighter, but for a real boxing fan, you can tell he’s a great fighter.

“But I have no problems watching them or fighting a fighter like that,” said Valdez.

Top Rank obviously wants to put the unification fight between Valdez and Herring right now. It’s a match that promises to be more entertaining than to see Valdez take on Shakur, which could be a track meet. 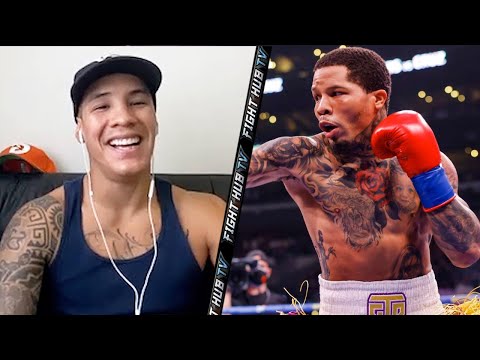 Andrade vows to punish Williams for his trash-talking »