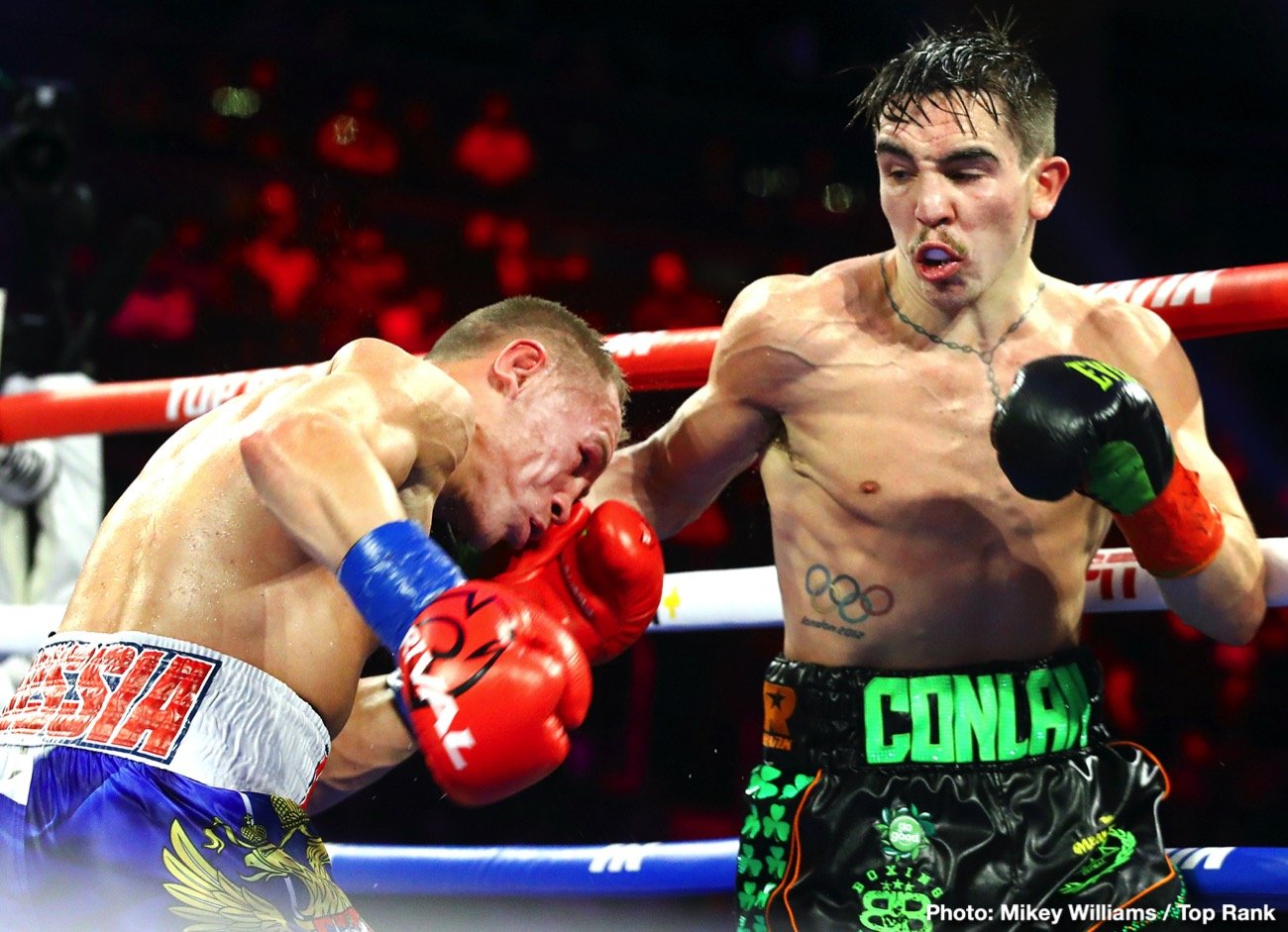 Exclusive interview by Ian Aldous: August 16th 2016: Reigning World (overcoming current WBA & IBF World champion, Murodjon Akhmadaliev in the 2015 final), European and Commonwealth Games amateur champion, Michael Conlan is expected to vanquish Vladimir Nikitin in the quarter-finals of the 2016 Olympics, and ultimately improve on the bronze medal he acquired at London 2012. What transpired is viewed globally as a brazen robbery when Conlan, who clearly bested Nikitin, is mugged in plain sight. He, rightly, makes his highly-charged emotions very clear to the inept judges at ringside, and an iconic image of the irate Irishman saluting them is etched into Olympic folklore.

Almost exactly three years on, Conlan, promoted by Top Rank and guided by MTK Global, is headlining in his home city of Belfast in front of 10,000 of his adoring fans at Falls Park. He demolishes Diego Alberto Ruiz inside nine rounds. The only feature of the event more impressive than his victory is the spine-tingling atmosphere as rain drizzles, yet fails to dampen the spirits of those in attendance. It was a simply unforgettable night in Irish boxing history.

“It was one of the most special nights of my career so far. There have been some fantastic ones already and that one probably stands above the rest,” Conlan explains. “Boxing in a park where I had many unlicensed fights I wasn’t paid for (laughs). I could throw a stone and hit my mother’s window, that’s how far her house is from that park. Me being a proud Irishman fighting somewhere where I grew up, in my home country, was special. It showed Belfast for what it was – a city that loves boxing, a city that’s steeped in boxing history that I’m happy to carry on.” 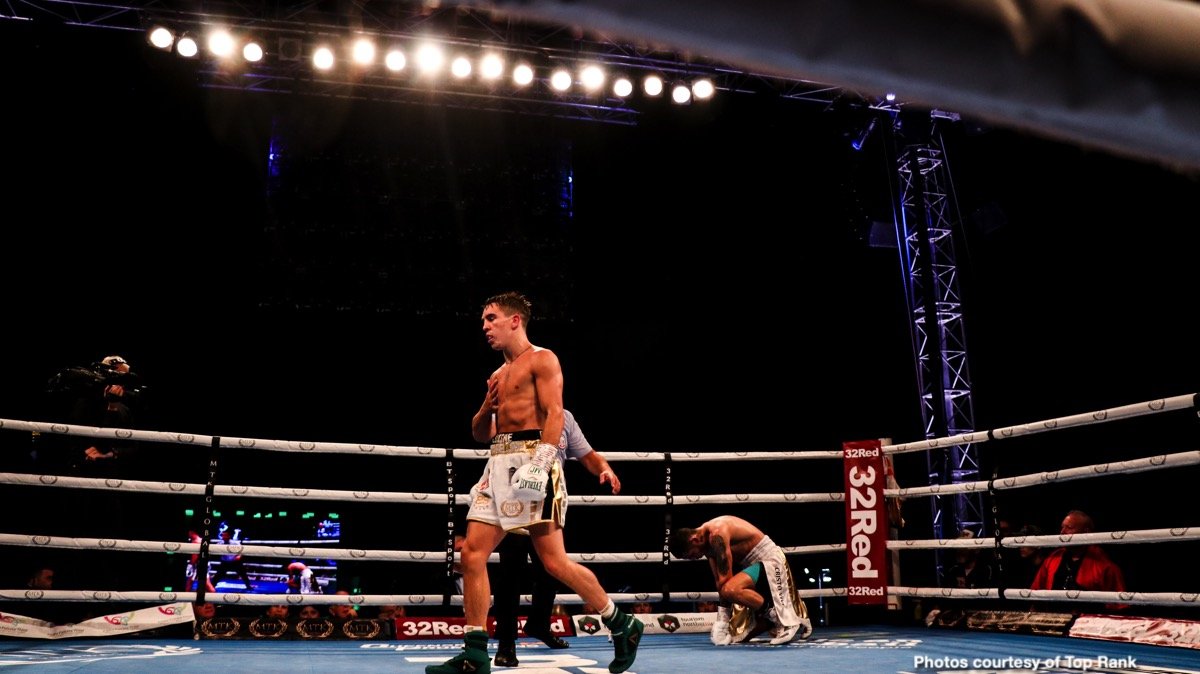 Just four months later, Conlan avenges the travesty of Rio 2016. In a rescheduled ten-round bout that had originally been set for the Falls Park event, Vladimir Nikitin is comfortably outpointed. This time, fortunately, the records correctly illustrate that fact.

“When we boxed in the Olympics, no matter what anybody says, I should have got the decision, but it was still a very competitive fight,” he admits. “I was in there against a live opponent who had a lot to prove. I went in there and got the job done convincingly, quite comfortably. I felt good doing it. I never had any personal grudge towards Vladimir Nikitin. It wasn’t his fault.”

He viewed it as merely ticking off another box on his ‘to do’ list. Job done.

As the elite amateur’s pro career begins to gather pace, a pandemic brings his and all of boxing’s momentum to a juddering halt. His traditional outing on St. Patrick’s Day at MSG is cancelled and he returns home without a pay day and the experience of another pro win. He not only lost out on that, but an even bigger date in the summer of 2020 dissipated.

“That would have set me up for my World title fight as well which would have happened that summer. It stopped everything. There was nothing anybody could do about it. There’s no point sitting and complaining and getting upset about it. For the first two weeks I kind of ate what I wanted to eat then I just started to train and haven’t stopped training since. I’ve been training for enjoyment. My lifestyle now has completely changed. It’s more healthy and active. If I’m honest, I’d put it down to Covid because before Covid boxing felt like it was a job and something I had to do.”

Every cloud supposedly has a silver lining. Ironically, a break away from boxing actually reinvigorated his love for boxing.

A decent tenth-round stoppage win over Sofiane Takoucht in August follows before injury puts another pause on progression. A fight with former super-bantamweight World champion, Isaac Dogboe falls through due to a ligament injury. 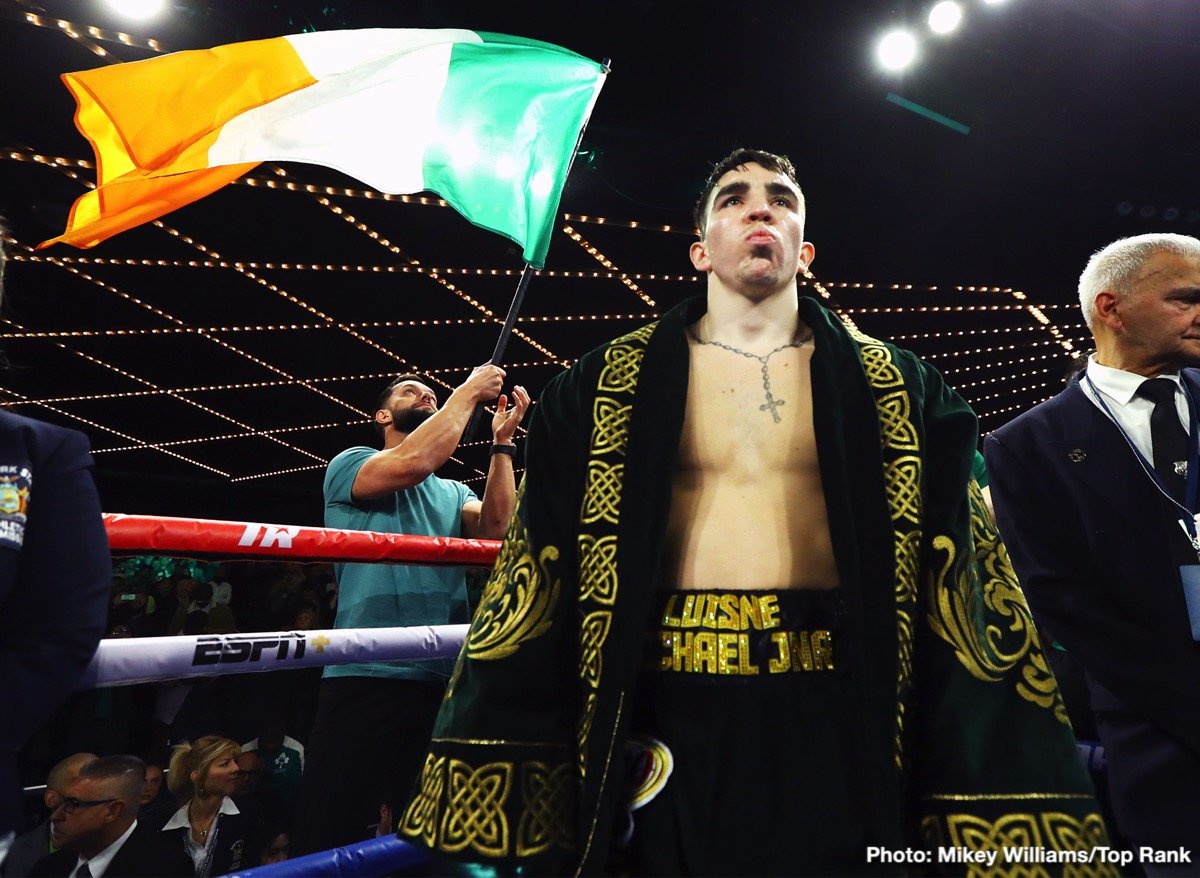 After recovering fully, the now 14-0 contender will move down in weight for the advent of an assault on the 122-pound division. That mission initialises on April 30thagainst serial upsetter, Ionut Baluta. Consecutive away wins over Kyle Williams, TJ Doheny and Davey Oliver Joyce have seen Bob Arum label the Romanian as ‘a big step up’ for Conlan.

“Baluta is a very, very good fighter, don’t get that wrong,” the twenty-nine year old added. “I’m just a better fighter and that’s all it is. I’m not underestimating this guy, he can pose threats if he wants to but I believe I break him down and I knock him clean out.”

“We’ve got to take care of business on April 30th and then we’ll get that World title this year. I have no doubt in my mind that opportunity arises and Michael Conlan will become WBO World champion in 2021.”

Then a tantalising title tussle looms on the horizon later this year. As the WBO’s No.1 contender to Stephen Fulton Jr.’s World title, a contest between two of the elite in the division awaits for eager fight fans.

“I haven’t watched much of Stephen Fulton,” he reveals. “I’ve watched bits of him, so I know what he’s about and how good of a fighter he is. He is a fantastic fighter and someone who went through the levels (beating) undefeated fighters here and undefeated fighters there.”

The former IBO and reigning WBO World champion will have to conquer the ninth undefeated fighter on his pro ledger if he wants to successfully defend his crown against Conlan, a supremely skilled boxer comfortable fighting orthodox or southpaw, whichever is required.

“I gave him huge props. He’s a fantastic champion and for me to beat him will be a big statement. And I will do it, but I’m not even focused on him. What’s the point in me focusing on this guy and I miss the boat on April 30th? My focus is Baluta.”

Trainer Adam Booth has always believed Conlan to be a natural super-bantamweight and Conlan is now looking after his body so well that he’s the lightest he’s ever been. He exudes confidence when describing how he’ll be a “huge beast standing in front of Ionut Baluta” on April 30th, in their contest he believes will be a twelve-round contest, despite information elsewhere claiming it to be over ten.

If the expected result occurs on April 30th and Baluta succumbs to the pressure of the proud Irishman, that World title shot will be within reach. The desired dream would be to rekindle that wonderful night outdoors in Belfast two years ago and return to Falls Park.

“It’s definitely possible. This summer we’re already talking about Falls Park,” he states excitedly. “My brother Jamie is already having the conversations. He gives me little bits of information here and there but he doesn’t give me much because he knows I need to stay focused. But he says they’re having the talks.”

“The fact that we’re on that path and those things are being spoken about is exciting. What a summer we could have at Falls Park. 10,000 or if it has to be lower, 7,000 or 5,000 standing there singing Grace, coming out first against the champion. I’m excited. This is a massive year. There’s so much of a carrot dangling in front of me, but I got to keep my eyes on the string because the string can’t go first.”

He spoke of feeling the tingles as the hairs stood up on the back of my neck recounting that night in Belfast. I was fortunate enough to be in Madison Square Garden for AJ/Ruiz Jr. just a few months prior, yet that atmosphere was dwarfed by what I experienced in Northern Ireland.

Irish boxing has a rich and illustrious pedigree in both codes of the sport. One of its greatest walked away last weekend when two-weight World king, Carl Frampton vacated his throne atop Irish boxing – a man who is deeply respected by Conlan.

“He is, in my opinion, Ireland’s greatest ever professional boxer.”

“It probably comes down to generations. The older generation might say Rinty Monaghan, some might say Barry McGuigan, but I think of our generation, and also all-time, Carl is the best. What a career, what a boxer, what a person! Loved by everybody and bringing the whole city together. He’s a special fighter and special human being.”

“There will be a hole in Belfast boxing for a while and hopefully I can fill it, and the fighters coming through can fill it.”

Michael Conlan is ready to fill that void and take the mantle of Irish boxing into 2021 and beyond. He might emulate Frampton’s World titles in two divisions and it’s possible, given his talent, that he may even exceed that and attain the status of becoming Ireland’s first-ever three-weight World champion.

Promoted by Frank Warren’s Queensberry Promotions, Moruti Mthalane vs. Sunny Edwards and Michael Conlan vs. Ionut Baluta will stream live and exclusively in the United States on ESPN+ at 4 p.m. ET/1 p.m. PT. Undercard bouts are scheduled to begin live on ESPN+ starting at 2 p.m. ET/11 a.m. PT. BT Sport will televise in the UK and Ireland.