By Jim Maltzman: Jamel Herring weighed in at 129.4 lbs for the title defense of his WBO super featherweight belt against former two-division world champion Carl Frampton for their 12 round fight on ESPN+ this Saturday night at the Caesars Palace Dubai, Dubai.

Frampton (28-2, 16 KOs) weighed in at 129.9 lbs, and he looked like he was already filled out. It’s not likely that Carl will rehydrate a lot overnight for this match.

In contrast, Herring, 35, looked emaciated at the weight, thin, and not strong. He’ll likely put on a lot of weight overnight and come in on Saturday looking huge.

Herring will be making his third defense of his WBO 130-lb title that he won in May 2019. He’s coming into this fight with a six-fight winning streak after losing to Ladarius Miller in 2017 and Denis Shafikov in 2016.

Herring has turned his career around in the last four years with his coaches’ help, but it’s unclear whether he has the talent to beat Frampton.

At 5’10”, Herring has the natural size to beat the smaller 5’5″ Frampton if he can keep him on the outside all night, which won’t be easy to do.

In unquestionably the most interesting fight on the undercard, former four-division world champion Donnie Nietes (42-1-5, 23 KOs) will be facing Pablo Carillo (25-7-1, 16 KOs) in a 10 round fight for the vacant WBO International super flyweight title.

Nietes has been inactive for over two years since his win over Ioka, which explains why he’s facing the lower-level fighter Carillo.

It’s an easy thing to say that Herring is the softest target for Frampton to have picked, but what’s perhaps more important is that he’s with the same promotional company at Top Rank.

Herring being arguably the weakest of the champions at 130 is a bonus for Frampton, but not the leading factor in why he’s fighting him.

With that said, Top Rank would probably steer Frampton in the direction of another super featherweight champion if they found one that was even weaker than Herring.

Frampton must win a belt because it enables him to accomplish his dream of becoming Ireland’s first three-division world champion.

Over and above that, it gives Frampton a title that he can use to face the Top Rank promoted WBC 130-lb champion, Oscar Valdez, in a unification.

That’ll be a big deal for Frampton, Ireland, and the boxing fans around the world to see him and Valdez square off in a unification fight.

“Yeah, he’s been out of the mix for a while, but I think if you’re going to go after a 130-lb champion, Herring is probably your guy,” said Paulie Malignaggi to The Boxxer Podcast in talking about Frampton. 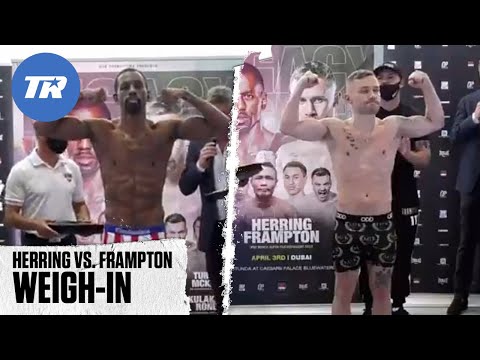 “That’s not a knock on Herring. The 130-lb division has some solid champions there, but I’ll say this.

“Herring is a guy that has also shown some improvements after earlier in his career. I remember him being an ex-Olympian, but I wasn’t really too impressed with him as an ex-Olympian.

“I was impressed with his story,” Malignaggi continued about Jamel Herring. “An ex-Marine, a Long Island guy from New York, so obviously a guy for me is easy to root for.

“But at the same time, he [Herring] wasn’t as impressive as some of his Olympic teammates have been.

“But little by little, he [Jamel] got it together, he made some improvements and made some key adjustments, and he’s managed to become a world champion.

“But he’s solidified himself and got his stamp; he’s won his world championship.  If there’s a guy for Frampton to go after, I think it’s Herring.

I’m not sure that you can say that Herring has “solidified himself” as one of the super featherweight champions because he hasn’t faced any of the risky 130-pounders.

For Herring to be seen as rock-solid as a champion, he would have needed to beat these types of fighters:

Could Herring beat some of those guys? Maybe but it’s unlikely that Herring would beat even half of them, and maybe not even 25%. Farmer and Foster would be Herring’s best bet, but the rest would probably be too good for him.

Frampton, 34, would seem to be the safe pick for Saturday’s fight between him and WBO super featherweight champion Herring. 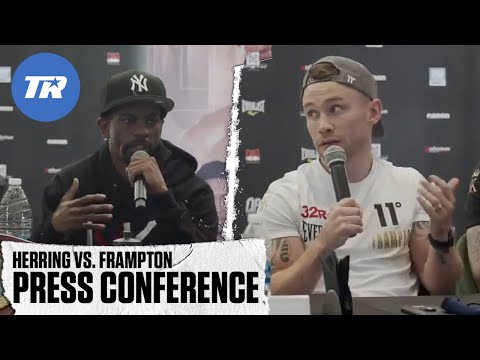 Carl has fought the better opposition during his 12-year professional career than the American, and he’s accomplished more.

Some boxing fans think Herring played to the referee in his last fight with Oquendo, making a big deal each time Oquendo would accidentally bump heads with him.

It looked like Oquendo’s pressure was wearing Herring down in that fight, and it not for the 8th round disqualification, he might have won.

“This fight is a tough one to pick. I don’t necessarily think Frampton is going to win this fight,” said Malignaggi.

“I think Frampton has a very good chance of winning this fight if there’s any bit of Frampton that we know left.

“Herring is going to be the guy he is. He’s solid, he’s fundamentally good, and I think he’s with Crawford’s trainer.

“I forget his name, but he’s made some really good improvements with that team with the Crawford team, the championship team around him.

“Having said that, this will be his biggest win. I don’t think Herring has fought a guy or beaten a guy on the level of Frampton.

“I still think Frampton has enough left to where if Herring beats this version of Frampton, I’ll be even more impressed with what I have been since I seen him make the adjustments he’s made in his career.

“Right now, if I had to pick someone, it’s 50-50 or maybe 55-45 in favor of Frampton. That’s that intensity kind of fight, and Jamel doesn’t fight that type of fight.

“That’s the type of fight that gets away from you as you get a little older is the intensity type of fight where you just can’t keep up with that way. [Josh] Warrington was a hungry guy.

“Warrington, at that time, that’s the way he was fighting [when he beat Frampton in December 2018]. An older guy can kind of become inundated and overwhelmed.

“Not that Frampton was old, old, but he was past that point in his career where he was fighting those kinds of fights, you know?

“I think Herring is also that point in his career where he’s fighting those types of fights.

“So I think from a technical perspective, it’s technical to technical. I give Frampton a good chance here; I probably pick him,” said Malignaggi.