By Barry Holbrook: Andy Ruiz Jr was happy for the support that Anthony Joshua showed to him after his loss in their rematch in December 2019 in Riyadh, Saudi Arabia.

An overweight 300+ lb Ruiz Jr (33-2, 22 KOs) hit a low point after losing his IBF, WBA & WBO heavyweight titles to AJ by coming in out of shape, and he made things worse by overeating after the defeat.

Joshua’s message that he sent to Ruiz in giving him a mental boost was really appreciated, and he has no ill feelings towards him despite the loss.

Ruiz, 31, will be fighting for the first time since his loss to AJ next month against Chris Arreola on May 1st on FOX Sports PBC pay-per-view from the Dignity Health Sports Park in Carson, California.

It’s an important fight for Ruiz to take on the two-time heavyweight world title challenger Arreola (38-6-1, 33 KOs) because he needs this win to prove to himself and the boxing world that he’s back. 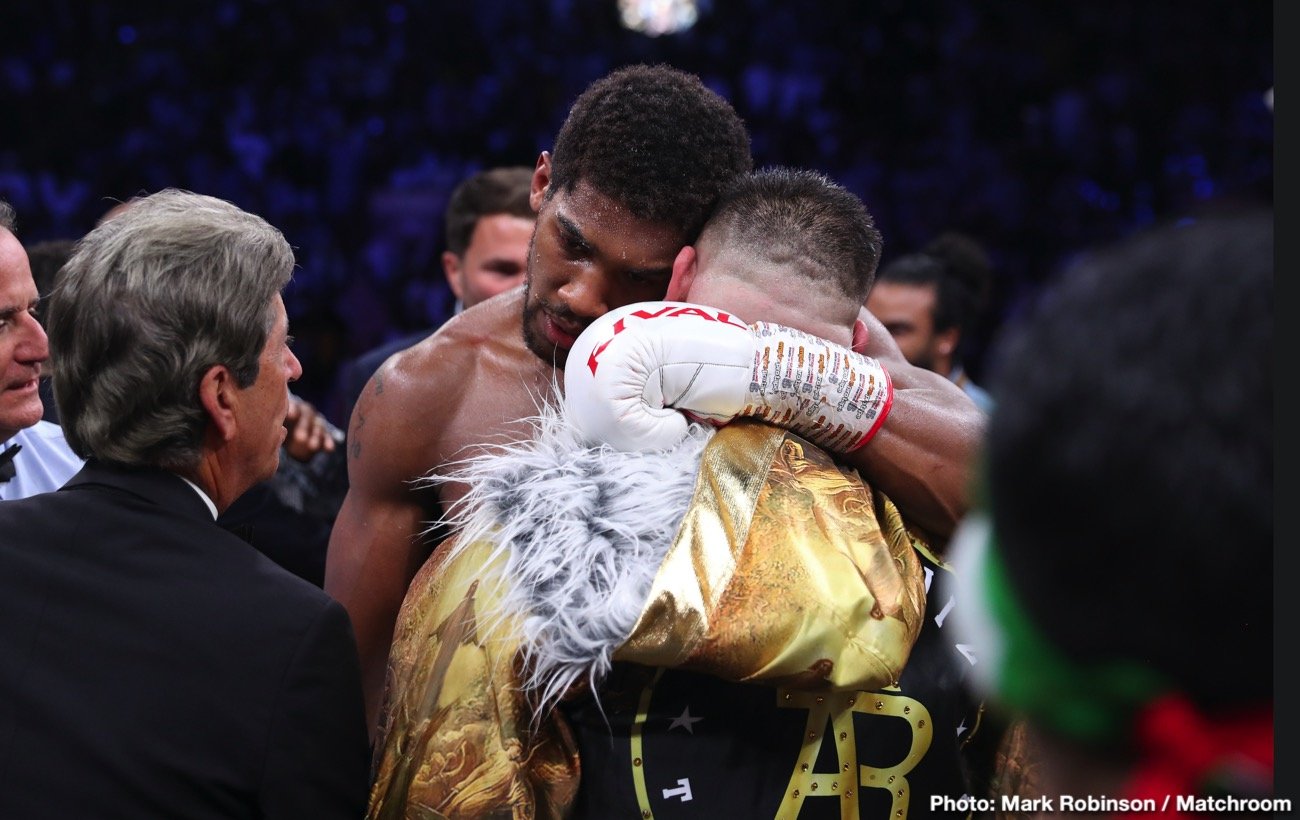 “There were a few messages. We were just saying that I’d bounce back, that I’m a great fighter. I have nothing but love for him.

“I don’t have no grudges,” said Andy Ruiz Jr to the Daily Mail about Joshua giving him support after beating him in 2019.

“I just wanted to crawl under my bed and just hide and eat Cheerios,” Ruiz said about how he felt after losing to Joshua.

Going from rags to riches proved to be too much for Ruiz, who reveals that he had been evicted from his apartment shortly before his first fight with Joshua in June 2019.

Following Ruiz’s upset seventh-round knockout win over Joshua in New York, his net worth soared to $7 million, and all of a sudden, he was able to buy things he could only dream of earlier.

Unfortunately, the parties and celebrating of his win over AJ proved to be too much for Ruiz, distracting him from buckling down and training hard for the rematch.

In hindsight, Ruiz shouldn’t have scheduled the rematch so soon against Joshua, as he needed time to adjust to becoming a millionaire and having such a change of lifestyle. It was a huge shock to Ruiz to get all that money and proved to be too much.

“A lot of people got mad after the fight when I said I didn’t train right,” said Ruiz.

The boxing public was furious at learning that Ruiz had slacked off for the rematch with Joshua, particularly his fans.

They saw it as a sign of weakness on Ruiz’s part, and many of them were disappointed. For many fans who can’t afford to slack off their own jobs for fear of being fired, they couldn’t identify with Ruiz not working hard as they do.

Ruiz has a new trainer now in Eddy Reynoso, and he believes this is the coach that will bring him back to his former glory as a world champion. What we can say is Ruiz has lost a lot of weight with Reynoso’s help, getting down to 258-lbs. Whether that’ll help Ruiz win back his world titles is unknown at this point.

Ruiz’s opponent, Chris Arreola, will be looking to spoil his comeback dreams next month.

Arreola, 40, is hoping to pull off an upset to put his name in the mix for a third-world title shot. ‘The Nightmare’ Arreola is still improving, even at 40, and he’s coming off one of his most impressive performances of his career against Adam Kownacki in 2019.

Arreola threw over 1,000 punches in that fight and looked better than he ever has during his career. If Arreola had been able to fight like that during the early portion of his career, he likely would have beaten Vitali Klitschko, Deontay Wilder, and Bermane Stiverne.

Akhmadaliev vs. Iwasa – preview & predictions for DAZN this Saturday »