Canelo now is down two fights before he’s the undisputed 168lb champion. He needs to beat Saunders to take his WBO belt and then IBF champion Caleb Plant.

Ryan Garcia: Yildirim shouldn’t have been in with Canelo

“I told everybody what’s the deal, 3rd-round knockout,” said Ryan Garcia to Little Giant Boxing on Canelo’s win over Yildirim. “It was a good stoppage. It was just going to get a lot worse.

“It was a lot of abuse on that head. You don’t want to keep getting hit with those kinds of shots. He [Yildirim] got caught with that straight right, which I’ve never seen Canelo actually throw a straight right before.

“So that was pretty cool. He got him [Yildirim] out of there, and he shouldn’t have been in there in the ring with him. It was too low of a level, but Canelo made it clear. When you have someone that is not at your level, you make it real clear, ‘Get out of here,'” said Ryan.

You can blame the World Boxing Council for why Canelo fought Yildirim instead of a superior fighter like David Benavidez. If the WBC overwhelmingly approved Yildirim as Canelo’s mandatory despite him coming off a two-year layoff and defeat against Anthony Dirrell.

The WBC should have waited until Yildirim proved himself by beating one of the top contenders in the division before they approved him as the mandatory.

“I just see Canelo knocking him out too, but I feel that’ a great fight,” said Ryan about Alvarez’s next fight against Saunders. “Billy Joe Saunders is a great fighter, but he’s not a legendary fighter.

Ryan Garcia is probably right about Canelo knocking out Billy Joe on May 8th. Saunders was getting beaten up by the unknown fringe contender Marcelo Esteban Coceres when the two fought in 2019.

Coceres is nowhere near the puncher Canelo is. Saunders will try and use movement to keep out of reach of Canelo’s shots, but he’s going to get countered when he attempts to land something.

It’s better for U.S boxing fans if Canelo beats Saunders because if he loses to him, it will leave a big hole in the sport. The American fans wouldn’t suddenly become Saunders’ new fans. He has a boring, ugly style of fighting that makes him almost unwatchable.

“He’s a difficult fighter, he’s a southpaw, and he has a complicated style. I’m a fighter with a lot of experience, and I’ll be ready for whatever comes,” said Canelo about Saunders at the post-fight news conference last Saturday. 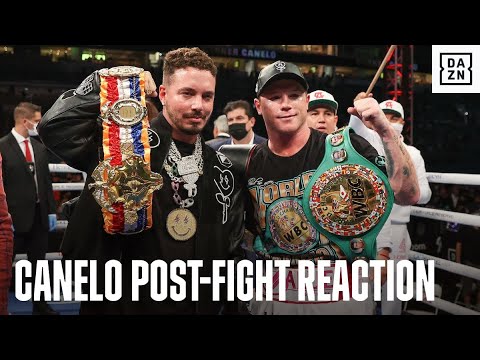 You wouldn’t expect Canelo to do anything other than try and build up his fight against Saunders by making him sound like a Skid row killer.

But if you’ve seen Saunders’ recent fights against Martin Murray, Marcelo Estaban Coceres, and Shefat Isufi, he doesn’t belong at 168. Saunders is too weak for this weight class, and he doesn’t handle the shots well.

“The truth is, we have a fight in May against Saunders, and whoever wins will go after them as well,” said Canelo about Caleb Plant and David Benavidez.

Canelo doesn’t have to worry about fighting the winner of the Plant vs. Benavidez fight because they’re NOT fighting. Plant wants nothing to do with a fight against Benavidez.

The only guys that Canelo needs to be concerned with are Saunders and Plant, neither of which can punch. I don’t think Canelo will ever fight Benavidez and that he’ll return in three to five years without facing him.

“I’m way better,” said Canelo when asked if Saunders, who fights similarly to Erislandy Lara, will give him problems. “I’m a more mature fighter, a more complete fighter, and I have a lot more experience,” said Canelo.

I don’t think Canelo has improved since he fought Lara, Mayweather, Trout, and GGG. He’s just gotten bigger and is facing weaker opposition.

“It’s not my fault ever. I always say yes to everything,” said Ryan on why he’s not fighting Manny Pacquiao next.

“If a fight ever falls through, it’s because of the opposite side. That’s no disrespect to Manny. He’s a great fighter. I’m sorry.

“He’s a legendary fighter and someone I respect a lot in and out of the ring. It was little things on his end that didn’t let the fight happen.

“The comment that Oscar [De La Hoya] made, I didn’t like,” Ryan continued. “It was very unprofessional, and it shouldn’t come out of my own promoter’s mouth. 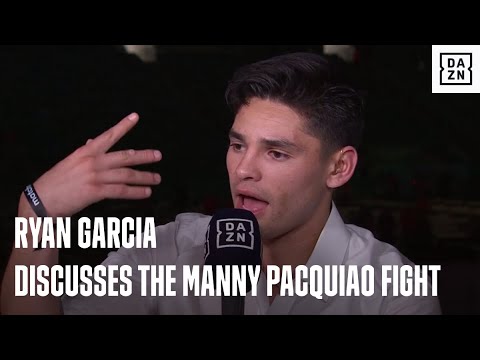 “That don’t make no sense. I wouldn’t go backward like that,” said King Ryan when asked if he’s going to be fighting Javier Fortuna next.

“I wouldn’t do that to myself. Fortuna is a great fighter, but I wouldn’t think he’d even last three rounds with me.”

#2 WBC Javier Fortuna (36-2-1, 25 KOs) might be Ryan Garcia’s best option for his next fight unless he wants to take a big risk by facing #1 WBC Vasily Lomachenko. Ryan wants to face the two guys, Manny Pacquiao and Gervonta ‘Tank’ Davis, who aren’t available.

Teofimo Lopez will be facing George Kambosos next, so he’s going to be available either. Really, there are no other options for Ryan other than Fortuna if he wants to face a notable opponent.

Of course, Ryan can wait until Tank or Teofimo are available later this year, but that’s not a good idea. Ryan needs to stay active and not slow his career down.

“I don’t tell him anything,” said Ryan when asked if he has a message to send Pacquiao. “He’s a legend and can do whatever he wants. I wanted to fight him, and he wanted to fight me too.

“Tank or nothing, they know what it is,” said Ryan Garcia about his next hoped-for fight.

Ryan sounds totally obsessed with the idea of fighting Tank Davis. If that’s all Ryan wants, it looks like he’ll sit and wait six to eight months for the fight to happen.

Ryan is young enough to sit inactive like this, but it’s not smart if he wants to be ready for Tank.

At least if Ryan fought Fortuna, he’d get a small taste of what it’ll be like when he gets inside the ring with Tank.

If Ryan can handle Fortuna in the way he thinks he can, he might be able to hang with Tank.

Anthony Joshua update on Tyson Fury: June should be date »