Callum Smith: I’m too big for Canelo Alvarez, he’s not a 168-pounder 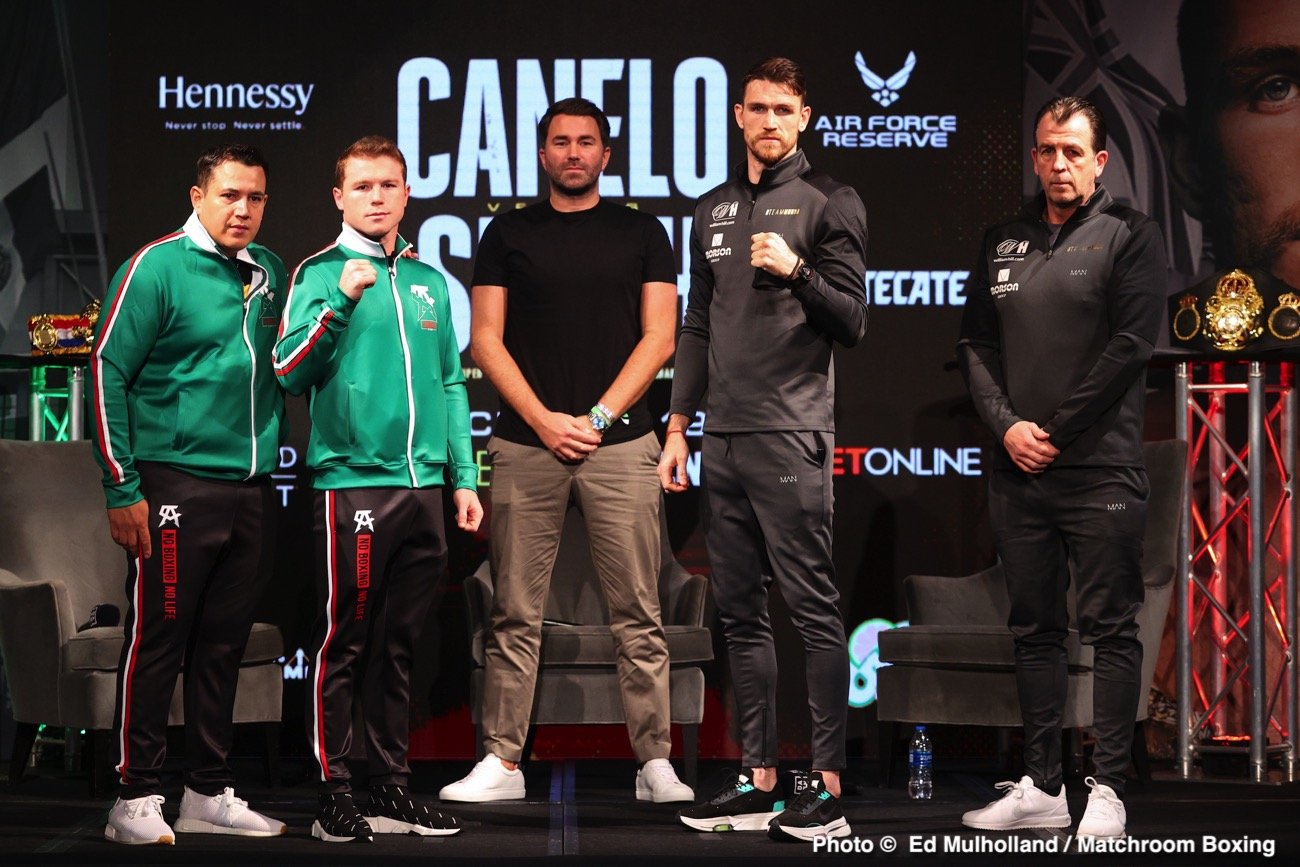 By Dan Ambrose: Callum Smith doesn’t believe the 5’8″ Canelo Alvarez belongs at super middleweight due to his lack of size, and he plans on proving that theory this Saturday night.

Smith, 30, is facing Canelo at the perfect time. The Mexican star has been out of the ring for 13 months since his victory over WBO light heavyweight champion Sergey Kovalev on November 2nd, 2019.

If there’s ring rust there with Alvarez, the tall 6’3″ Smith will take advantage of it, and perhaps knock him out.

The British fighter Smit knows what he’s up against in traveling to the U.S to fight Canelo in front of what will be a pro-Alvarez crowd at the Alamodome in San Antonio.

With Canelo having had many close fights go his way on the scorecards, Smith may need a knockout for him to win. Despite Canelo’s history of inning controversial decisions, Smith doesn’t believe that he’ll be on the receiving end of a questionable outcome.

He thinks the judges will do their jobs properly and give him the win if it shows that he’s the better man on Saturday. Of course, it wouldn’t hurt if Smith knocks Canelo down to or three times to make sure that the judges don’t get confused when scoring the fight.

Smith says Canelo is NOT a super middleweight

It’s limited how big your ability can make up for. We saw it with [Vasiliy] Lomachenko [against Teofimo Lopez]. I think that will be the case for Canelo against me, and I will be too big for him.

“But I am not just a big body; I also have skills and technique; I have shown that I belong on a world level. If I can use size and ability, I got a beating for Canelo at 168 pounds,” Smith said.

Canelo hasn’t proven himself at 168, considering that his only experience in this division came against Julio Cesar Chavez Jr and Rocky Fielding. Those are not elite-level 168-pounders and not anywhere close to being top fighters.

While Canelo’s supporters believe that his victory over former 175-lb champion Sergey Kovalev showed that he’d got the talent to excel at both super middleweight and light heavyweight, you can’t count that victory as having proven anything.

Kovalev is old and many years past his prime. As some people would point out, Canelo’s decision to face Kovalev for his WBO light-heavyweight title was a case of the Mexican star being a calculated opportunist.

Canelo saw weak champion, who came close to losing his previous fight against the badly flawed novice Anthony Yarde and decided to go after his to wain an easy title.

Alvarez could have gone after IBF/WBC light heavyweight champion Artur Beterbiev or WBA champ Dimitry Bivol, both of which are arguably world’s better than the old-timer Kovalev, but he chose not to face them.

Was that a calculated move on Canelo’s part to face Kovalev rather than Beterbiev or Bivol? It’s hard not to see it that way.

Smith believes he belongs at the elite level

What’s really interesting is the timing that Canelo is choosing to take on Callum Smith.

Canelo never showed interest in fighting the hard-hitting Smith when he was obliterating his opposition. Still, suddenly after his bad performance against John Ryder last November, we’re seeing Alvarez choosing to fight him.

Is it just a coincidence that Canelo is picking this time to face Callum, or does he finally feel that he’s seen enough holes in his game that he can potentially beat him?

“I’m not just in this fight to be a part of it but to win. I still have a job to do. It’s the biggest fight possible. Canelo Alvarez is the next level, the world level, and then there’s the elite level. 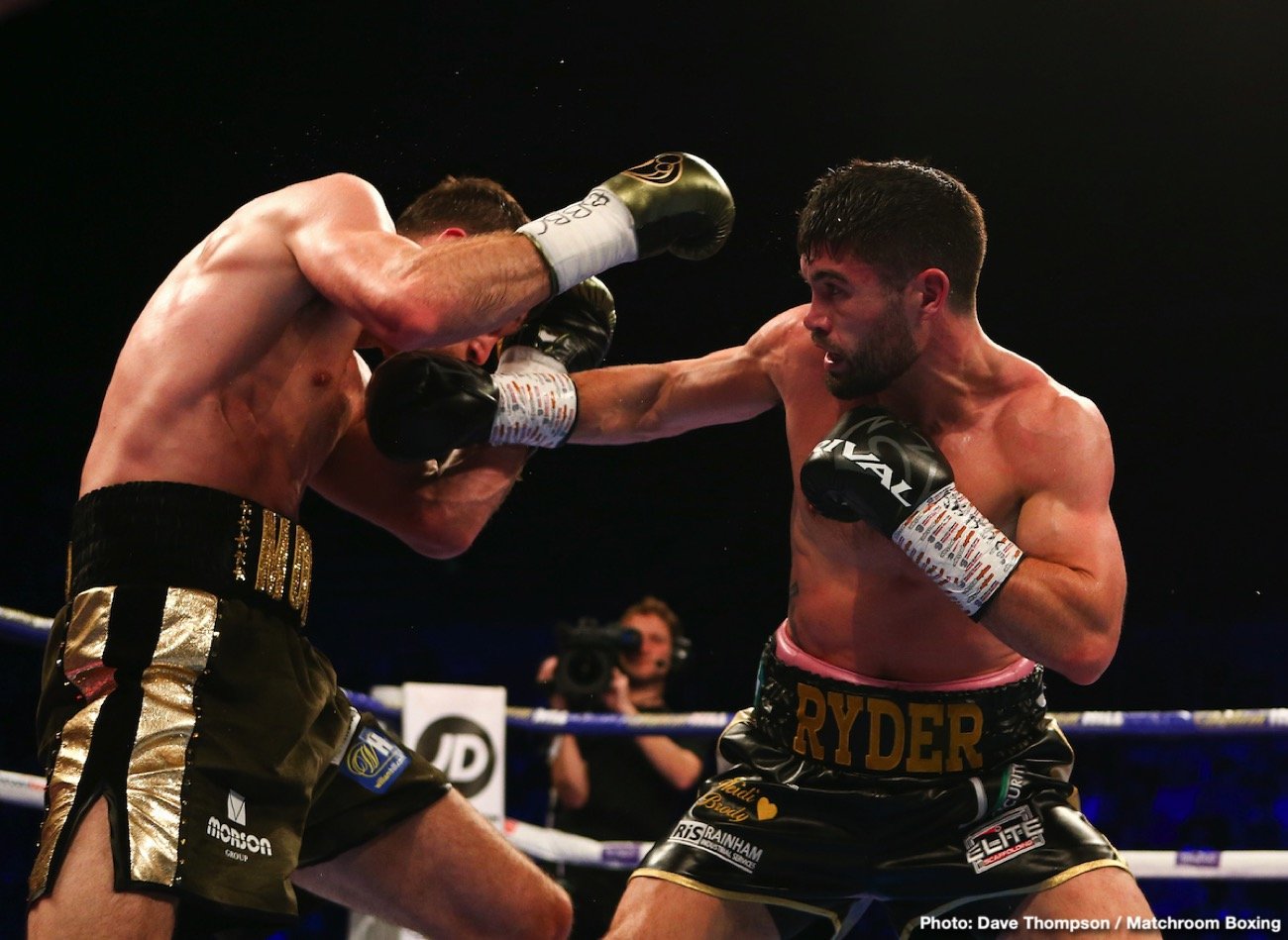 “He’s at the elite level. I believe I belong up there, and it’s a huge test. I feel like I’m more than ready, and I’ve been crying out for a fight like this to showcase my abilities since becoming world champion,” said Callum.

We don’t know how good Smith is because his opposition has never been great, and his best career victory came against George Groves. This was not the prime Groves that had given Carl Froch all he could handle in two fights.

Groves was coming off of shoulder surgery when he fought Callum in 2018, and he wasn’t the same fighter he’d once been. Other than the injury-depleted Groves, Smith doesn’t have much to show on his thin resume as far as talented opposition.

Callum is completely unproven when it comes to elite-level fighters, and that’s a good spot to be in going against a fighter with Canelo’s pedigree. 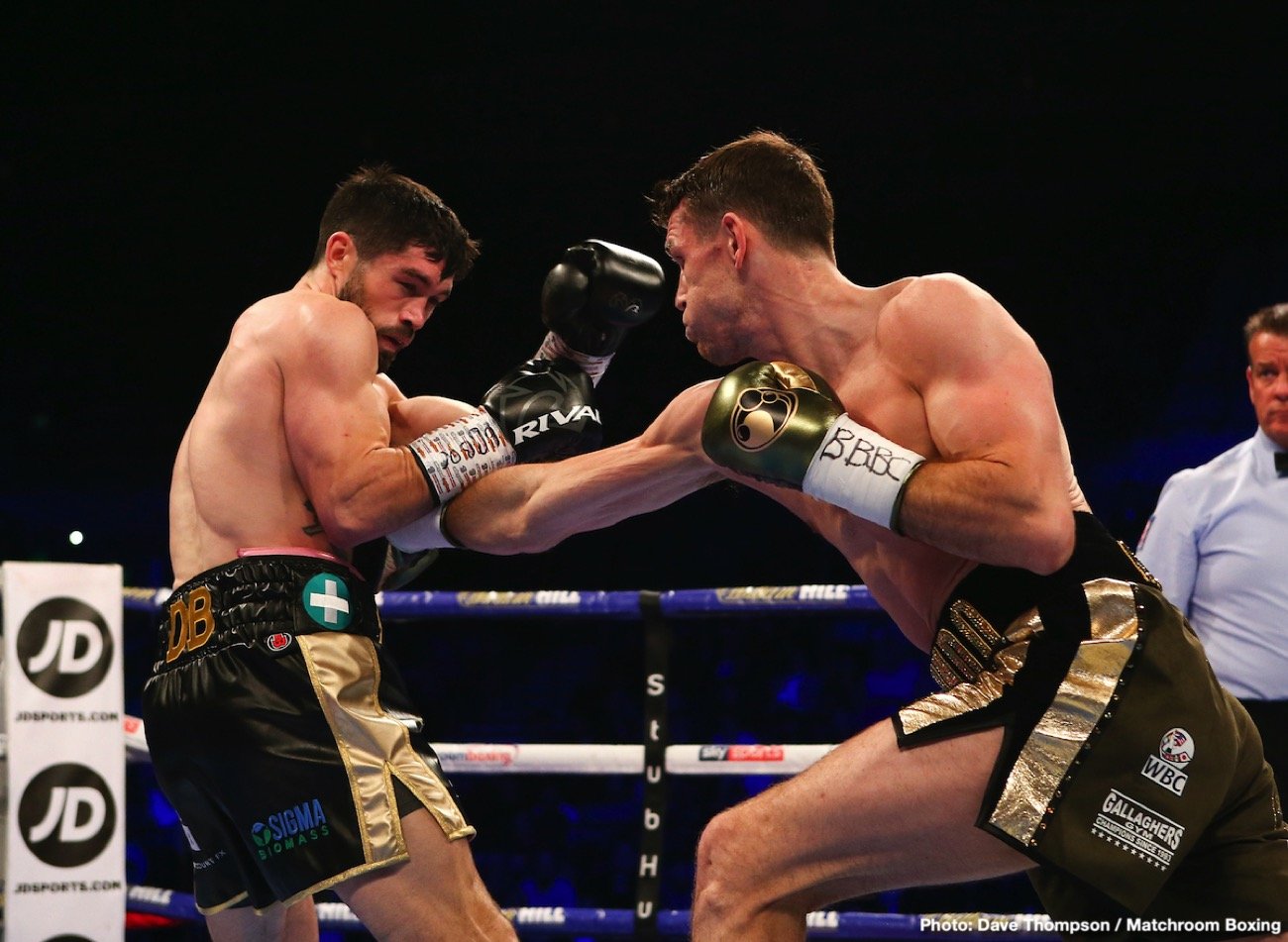 “I finally got it, and it’s time to deliver. I’ve always risen to the occasion. In my world title fights, I’ve always delivered when it mattered.

“There’s no bigger time to deliver that than against Canelo Alvarez. I’m fully focused, and I’m motivated, and I’ve always said that a motivated version of me is very hard to beat.

“I was in the gym training. It wasn’t specific for Canelo Alvarez, but I was training anyway. And I always knew there was a chance that this fight could possibly happen.

“I wasn’t lying around, three-stone overweight when I got the phone call four weeks ago. I was in the gym training. It’s not ideal, but I’ll be in good shape come December 19th. I wouldn’t be sitting here and accepted the fight if I didn’t believe that,” said Smith.

Well, it won’t be surprising if Canelo Alvarez exposes Callum, but it’s going to be interesting to see if the big 6’3″ Brit’s power bails him out.

Smith has got the punching power and size to make up for his lack of experience and boxing skills, but he’s got to find a way to land his shots.

Canelo has a head like a cement block and has shown that he can take the best punches from powerful knockout artists.

The only time Canelo looked like he was in trouble against a slugger was in the eighth round against Kovalev when the Russian fighter suddenly showed a brief glimpse of the fighter he used to be when he unloaded on Alvarez. 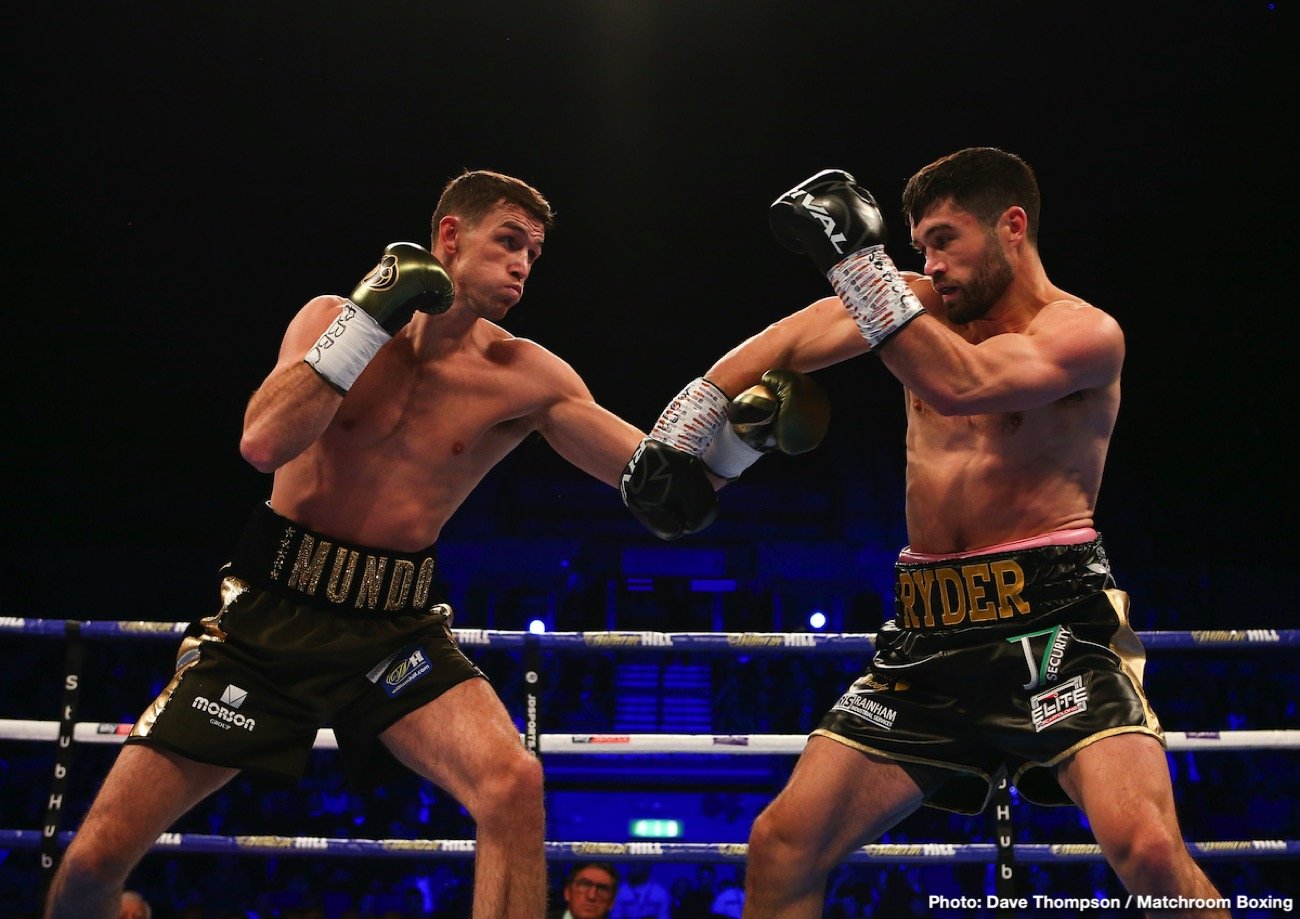 In that round, Canelo looked too small for Kovalev, and he was getting thrown around from the impact of the Russian fighter’s shots. Had Kovalev been able to fight that way or the entire contest, he would have knocked Canelo out.

If Smith can fight the way Kovalev briefly did in the eighth round, he’ll take the judges out of the fight and earn himself a rematch.

Povetkin not ready, Whyte could face someone else »