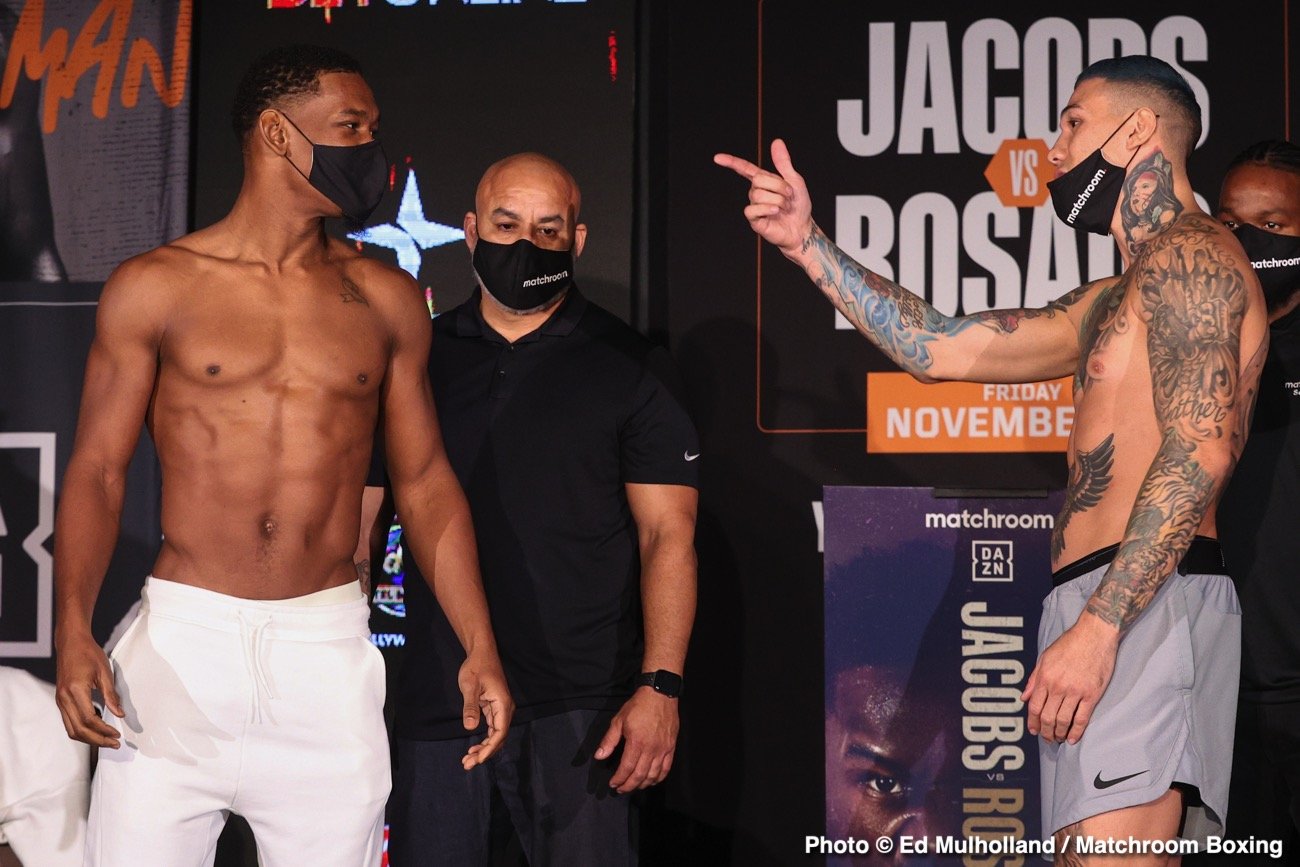 “I disagree with him, I think I beat him in every category, and I will show that on Friday night, plain and simple. My goal for taking this fight is to make him eat his words – there are levels to this game, and I’ll show I’m beyond this guy.

“There are no easy fights in boxing, he’s a top 15 guy, I would say he’s a gatekeeper, but he’s a tough gatekeeper, he doesn’t lay down, and if he goes down, he gets back up. A durable guy like Gabe serves as a great show, and the respect that I give every opponent is to prepare at 100 percent to give my very best.

“We’ve had similar opponents, and look at my performances versus his against the same opposition. My resume and skillset speak volumes; take nothing away from Gabe, but it is what it is, and I will show him.

“I can’t predict what is going to happen, but I can train my best to be prepared to go in the ring for the best Gabe Rosado we’ve ever seen. He understands that this is his last opportunity, and let’s be clear; I am giving him this chance; he hasn’t earned it; he talked his way into this fight.

“The main goal is to get a KO; you don’t want to be in there longer than you have to be. We get paid for 12 rounds, but you go home and enjoy the rest of the night if it ends early. I plan to go in there and execute, but we shall see what that execution looks like.

“You are going to see a more improved and enhanced by Daniel Jacobs. It’s my second fight at Super-Middleweight; I had a great camp, I am very comfortable at 168lbs, and I am looking forward to putting in a stellar performance on Friday night. I get the chance to shut this man’s mouth once and for all.

“For me, this is an opportunity to shut a man’s mouth that has been speaking badly about me over the past few years. We both know the things he’s said, the hate that he’s been giving me, and the jealousy that resides in his heart.”

“My self-belief and confidence, knowing I am willing to do whatever it takes, and I don’t think that he has that in him. There’s nothing he brings to the table that I haven’t seen already. I’m experienced. I have a great team and had a great camp, so I am locked in.

“Freddie Roach brings the best out of me. We had a great camp; he’s so knowledgeable and old school – straight down to business. Maybe in the past, I was probably dictating too much of my camp, how the pace went, and things like that, but Freddie is the boss. Whatever he says, I do.

“The fight will be whatever it will be. At this level, we will both make adjustments, and whatever type of fight it is, it will be at a high level because this is a must-win situation.

“The competition he fought coming up was no big deal, no disrespect to those guys. When he had to step up two times against Canelo and GGG, he fell short. I came up fighting the top guys; I had to learn on the job; he was groomed to be where he’s at; it’s different. But when he stepped up, he lost. It’s going to be a war on Friday, I promise you.”

“Trash talk doesn’t bother me. I am a tough guy, I have a great amateur background, and I am fast and strong; I will show my speed, skills, and power on Friday night; this is not easy work. Maybe for me it will be, I know he’s an experienced fighter with power and he’s a strong guy, but I think I am better than him. I feel great, and I think that this is my time and my night.

“This is the right time to fight him; it’s a good fight and my first for a title against a former unified World champion. I respect him a lot, but I want to show a beautiful boxing on Friday night.”

“Everything has been good in Alabama; I feel good. My conditioning has improved since moving to America, and I feel fresh and young. This is easy to work on Friday night. I feel great inside myself. My body doesn’t want to go to 140lbs anymore, so I realized I had to go to 147lbs; I feel that being there will work. I don’t predict fights, but I can tell you that actions speak louder than words.” 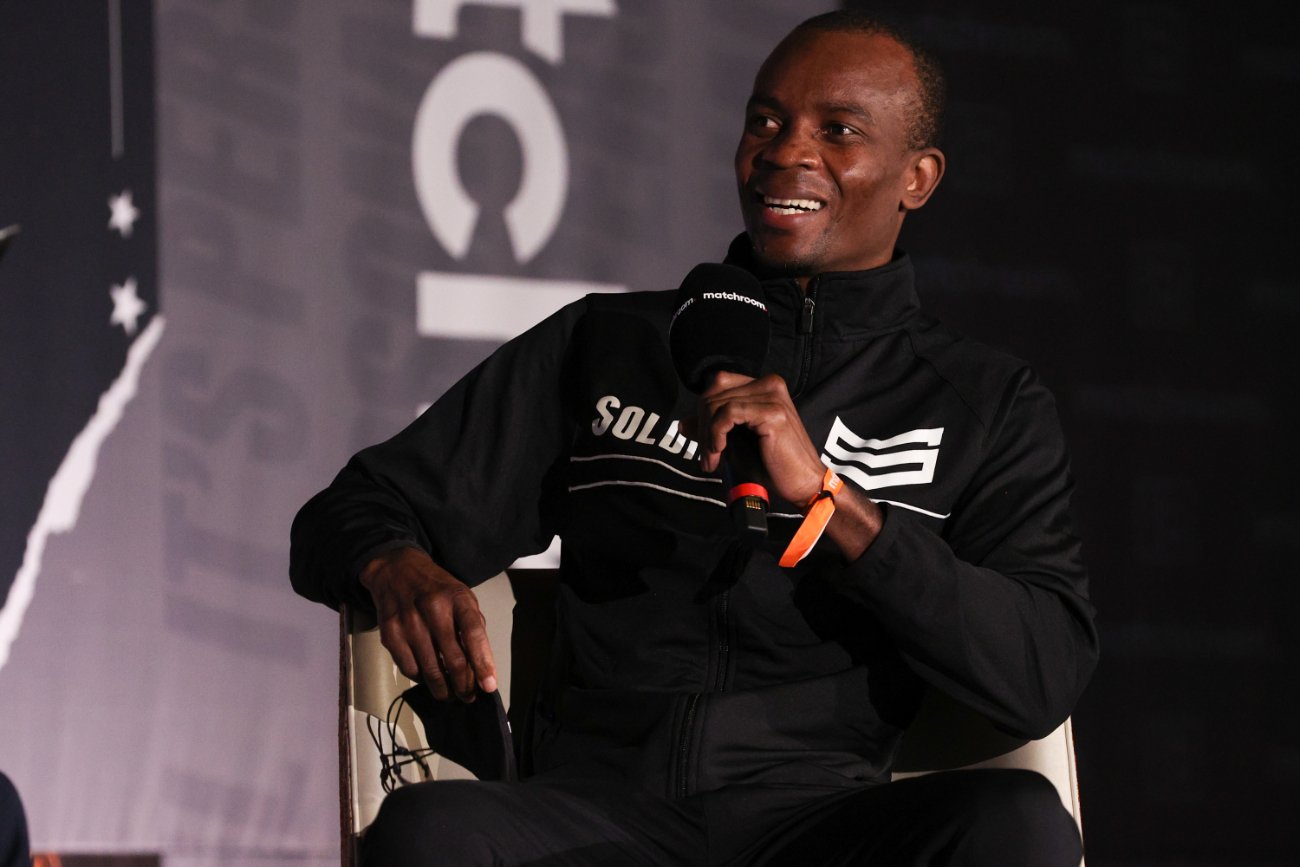 “I gave myself 5/10 for my last fight; we had some complications with COVID-19 and the bubble and stuff like that; this is the second time around for me, we came really prepared, and it’s the norm now.

“I don’t watch my opponents; I let my trainers do that, I am getting ready for title fights in the years ahead, and you will see on Friday night, I am maturing, but I will show fireworks, I just want to excite people so tune in live on DAZN.”

“I did some research; I know he’s a decent fighter. When they called me for the fight, I was game for it; I need a fight like this to be relevant, so let’s go. 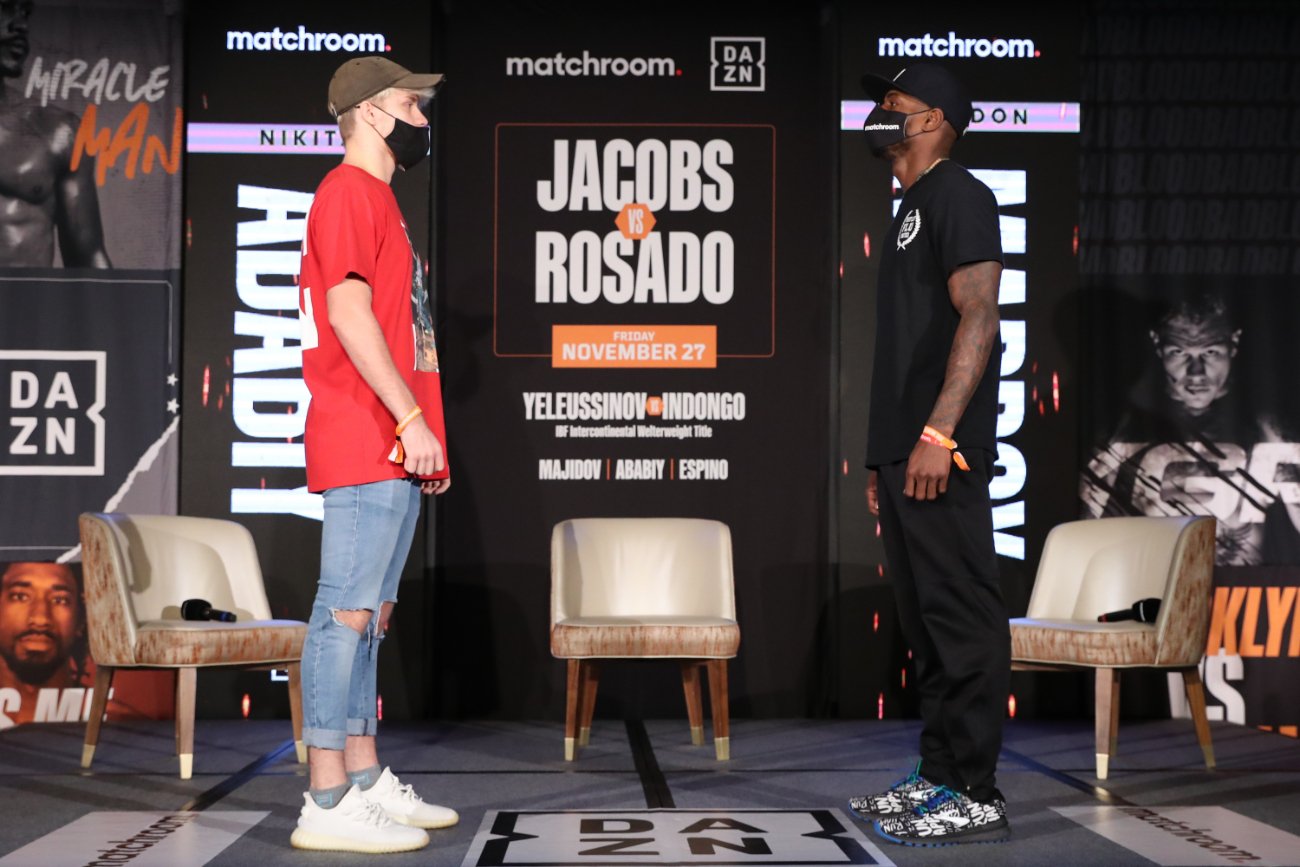 “And I have all styles; I can adjust; I will stand right in front of him and see what he’s got.”

“My English is not great sorry! The Azerbaijan president told me to stay in amateur boxing, but after 2016 in Rio, I wanted to be professional. Everything is good, I’m happy and back after one year, and I am ready.

“I remember my fight with AJ, he’s an excellent boxer, but I have a good experience, and I think I could repeat my win over him.

“Sahret is not a bad fighter, but I will show you how good I am on fight night.”

“I had management problems, which is why I had three years out of the ring. I know he has the international pedigree but so do I, I fought international fighters all around the world, so the amateur background doesn’t matter.” 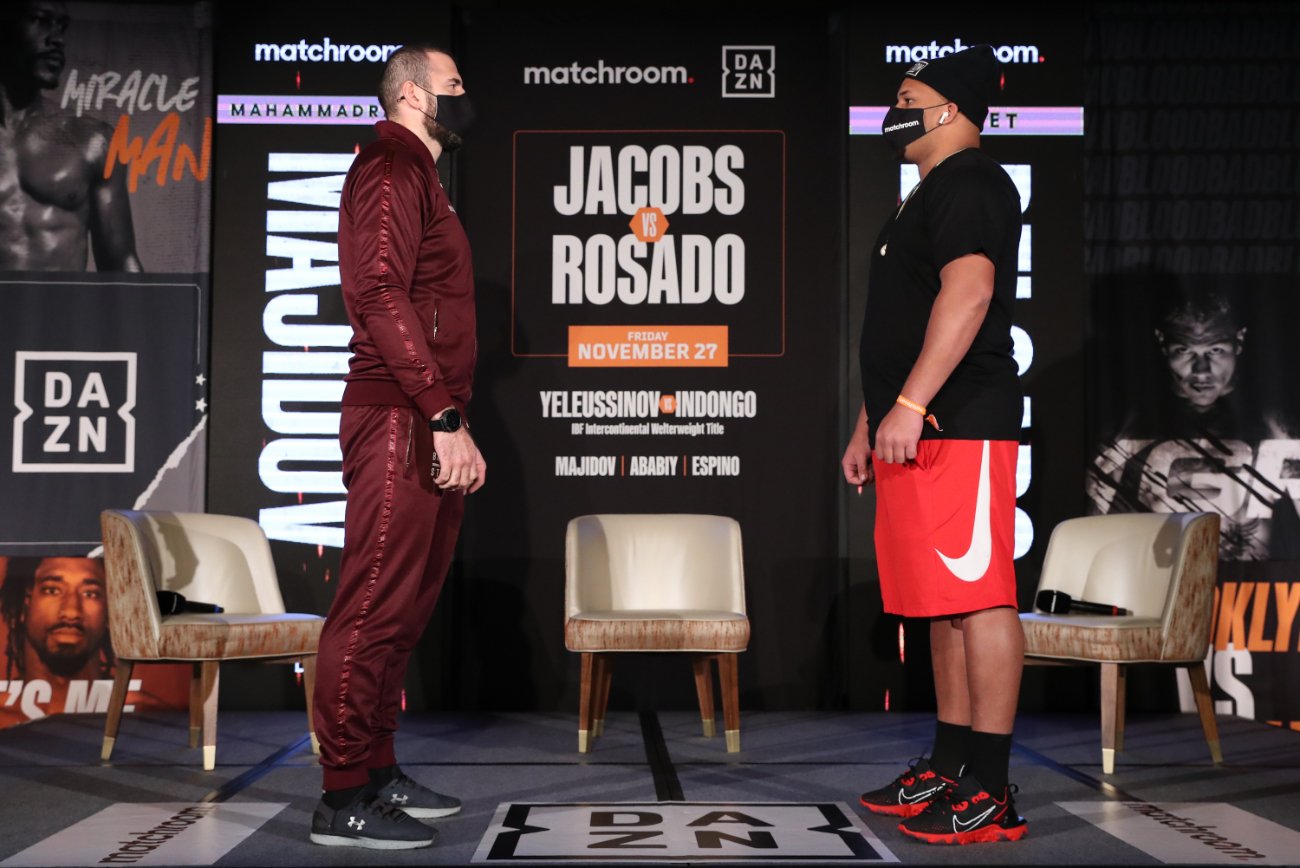 “I want to thank my team, my coach watches my opponents, not me, I don’t waste my time. My coach teaches me everything. People don’t know me yet, but after this fight, everyone will know me.

“I lost my first fight, but I was not a boxer then. And I didn’t have any amateur fights; I just went straight into being a professional. I think I am better than a lot of guys at 135lbs, god gave me boxing, and I know I can beat everyone in the division.” 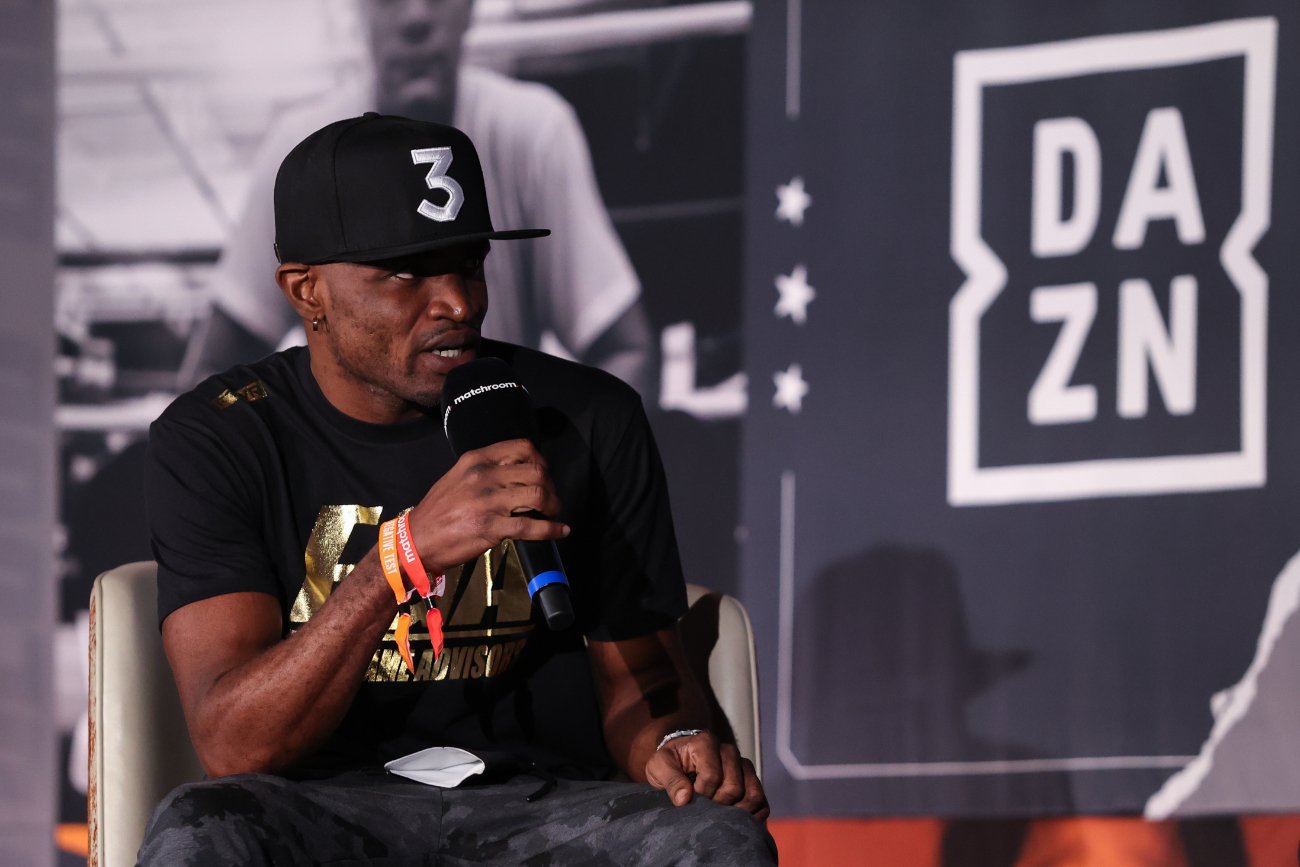 “The nickname was given to me early on in my career. When I was a kid, people called me Mighty, and for my second pro fight, the MC said, ‘I’ve got something special for you, wait ’til I announce you.’ And he’s the one that called me ‘Rock Hard Mighty Mason Menard’, I loved it, and I’ve been rolling with it ever since.

“I’ve seen plenty of video of him, and I expect a fun, entertaining fight between the two of us on Friday night.”


« WBC makes Oubaali champion in recess, Donaire and Rodriguez to fight for the vacant 118-lb title