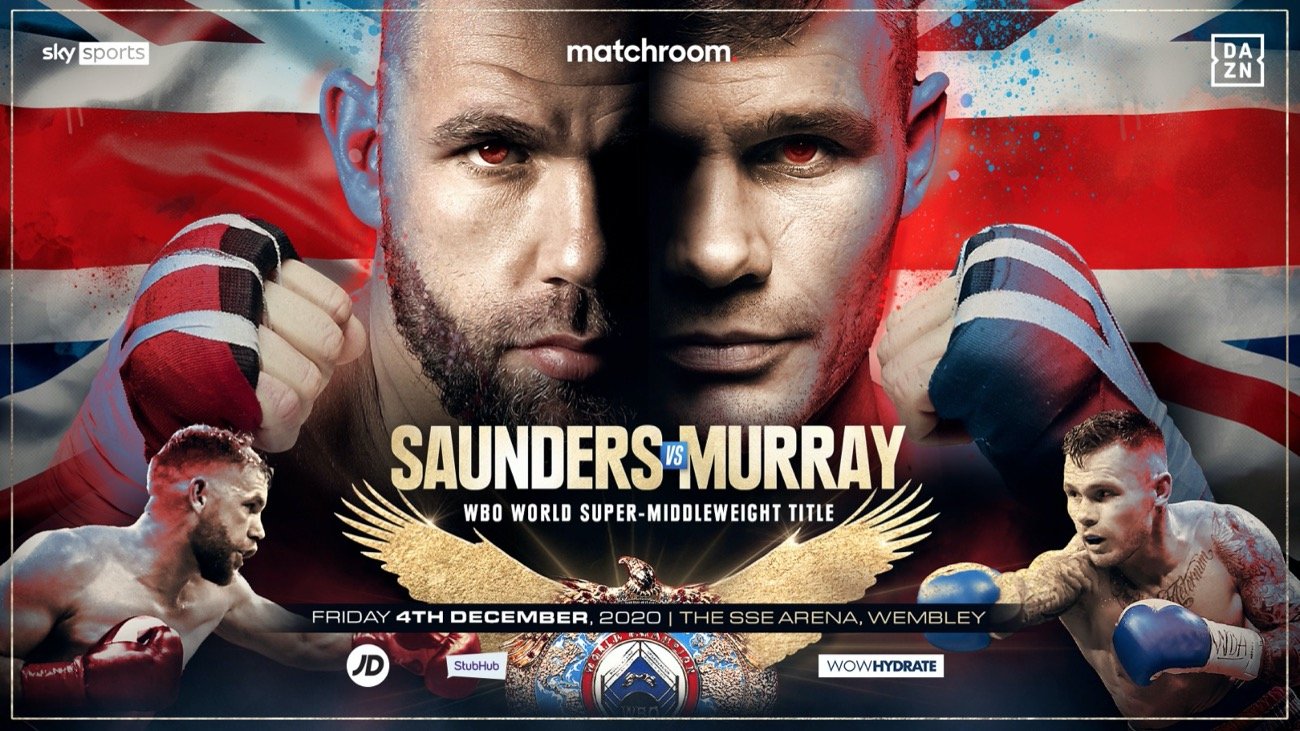 By Charles Brun: WBO super middleweight champion Billy Joe Saunders will be taking a tune-up fight against old warhorse Martin Murray (39-5-1, 17 KOs) on December 4th on DAZN and Sky. The Saunders-Murray fight will be taking place at Wembley Arena in Wembley, UK.

This stay busy fight against Murray is supposed to be a springboard for Saunders taking on Canelo Alvarez, Callum Smith, or Demetrius Andrade in 2021. For those fights to happen, it’ll require crowds.

As of now, the fight will be held behind closed doors. With that said, Eddie Hearn is still hoping that fans will be allowed back in by that point, but don’t hold your breath on that happening.

Murray will be fighting for a world title for the fifth time in his 13-year professional career, but you can’t say he deserves it.

You can’t say that Murray hasn’t had his chances to win a world title during his long career. These are Murray’s past world title tries:

Martin Murray not ranked in the top 15

The 38-year-old Murray isn’t ranked in the top 15 by any of the sanctioning bodies at 168, and it’s anyone’s guess why the WBO is even allowing it.

Normally, the World Boxing Organization’s champions are required to defend against the top 15 contenders, but that’s not happening in this case.

Saunders (29-0, 14 KOs) will be defending against a second-tier fighter in Murray, which is disappointing to say the last. There are a lot of deserving contenders in the WBO’s top 15 rankings at 168 that are being passed over so that Saunders can take a soft touch.

Saunders, 31, will be defending his WBO 168lb strap for the second time since winning it in May 2019 in beating little known German fighter Shefat Isufi. In Saunders’ first title defense, he beat fringe contender Marcelo Esteban Coceres by an 11th round knockout last year in November.

Saunders vs. Murray is a fight that was talked about many years ago before Martin started losing left and right. However, he’s now old and shot-looking, and he’s not beaten anyone of note years.

Murray’s best win since 2014 was a controversial 12 round majority decision victory over fringe contender Gabriel Rosado in 2017 in Liverpool, England. Many boxing fans saw that win as a robbery with Rosado, the visiting fighter, getting the business on the night.

Martin has a two-fight winning streak

In Murray’s last fight against a contender in December 2018, he lost to Hassan N’Dam by a 12 round majority decision. Since then, Murray has won his last two fights against these little known fighters: Sladan Janjanin and Rui Manuel Pavanito. Unfortunately, Murray has been fighting that level of opposition for him to win his fights nowadays.

“I’m delighted to announce another big fight for the 2020 schedule as we close out this tough year with a huge bang,” said Matchroom promoter Eddie Hearn.

“We were 24 hours away from an announcement for Billy to fight Canelo when the pandemic hit and so it throws up the final roll of the dice for Martin Murray who will give it everything on December 4.”

Fighting an opponent like Murray is in keeping with the level of opposition that Saunders has been fighting since 2016. Saunders has largely been fighting tune-up level opposition instead of the talented contenders and champions. Hence, Saunders been able to keep his unbeaten record going longer than it would have been.

Do you see a pattern here with Saunders? There’s clearly a failure to launch with Billy Joe. You hate to say it but it sure does seem like Saunders has been carefully matched by his promoters to filter out opposition that could potentially beat him.


« Adrien Broner getting serious with his career