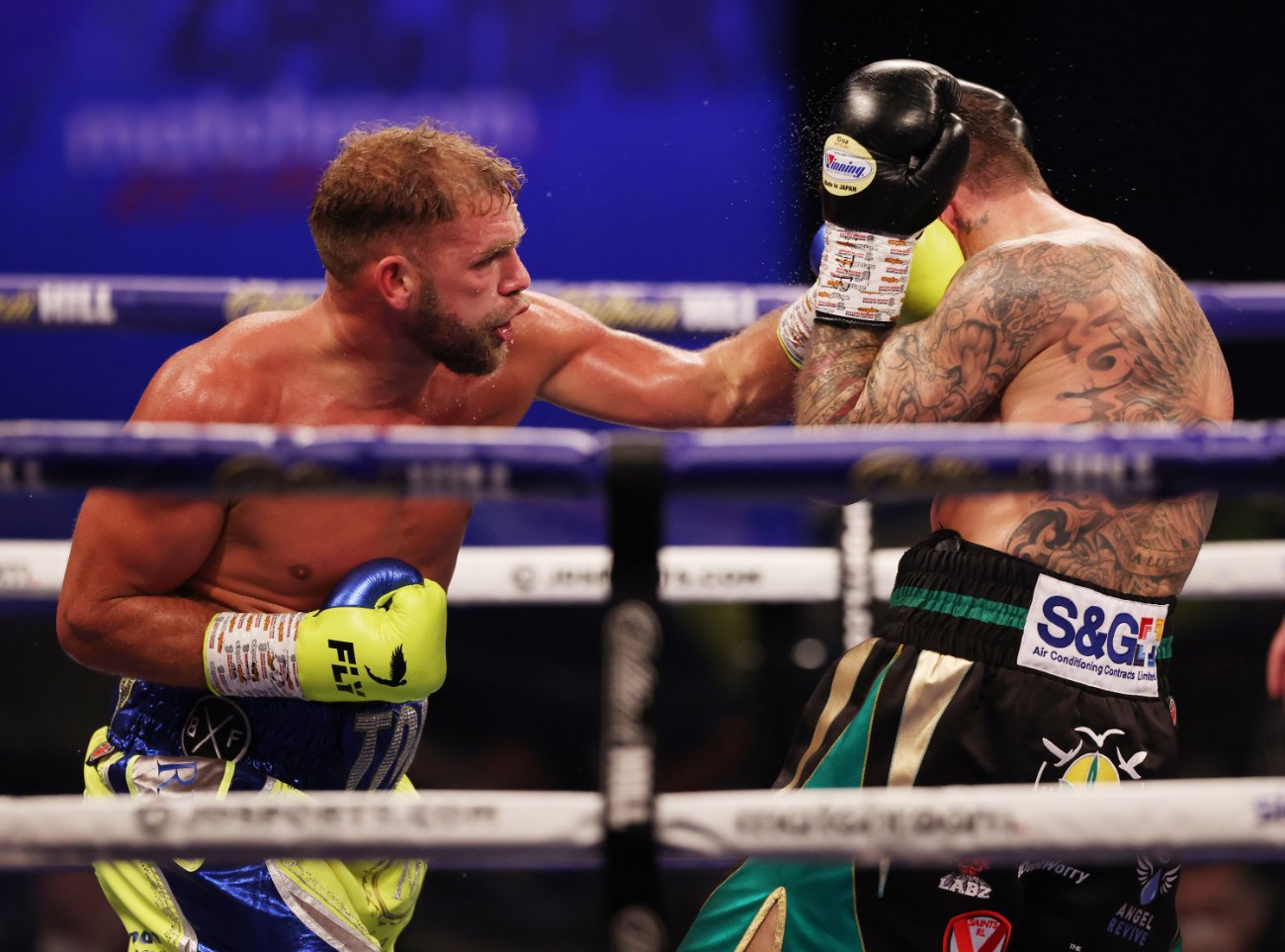 By Barry Holbrook: Billy Joe Saunders is showing interest in getting back in the ring against Chris Eubank Jr. for a comeback fight of sorts if the money is right.

Saunders wasn’t awed by what he saw of Eubank Jr.  (32-2, 23 KOs) last Saturday night with his four-knockdown victory over domestic-level fighterLiamWilliams at the Motorpoint Arena in Cardiff, Wales.

Eubank jr. looked flawed enough for Billy Joe to contemplate returning to the ring to fight him, albeit if the money is right.

Is Saunders’ price tag too high?

It’s thought that Saunders wants $5 million for him to get off the couch to take the fight with the 32-year-old Euank Jr, and it’s unknown if that kind of money is available for that kind of fight. Is Saunders worth $5M at this point in his career?

To be sure, Billy Joe hasn’t looked good in two out of his last three fights against Canelo and Marcelo Esteban Coceres, and a lot of boxing fans think that he ducked Demetrius Andrade when he held the WBO 160-lb title and vacated it rather than face his #1-ranked contender.

Will UK boxing fans be willing to pay to see the Saunders vs. Eubank Jr.II rematch in high enough numbers for the promoters of the event to recoup the money they payout to the two fighters in purses? If you assume that Saunders will be asking for $5 million, Eubank Jr. will probably want the same kind of money for the fight.

The former two-division world champion Saunders (30-1,14 KOs) hasn’t fought since losing his WBO 168-lb title to Canelo Alvarez in May 2020.

Saunders suffered multiple fractures of his right eye socket in the eighth round of that fight when Canelo hit him with an uppercut.

The injury resulted in Saunders requiring surgery to repair the problem, and it was believed that he wouldn’t be coming back unless he had a massive offer.

Eubank Jr. would be taking a risk

It would be a risky fight for #1 WBA ranked middleweight contender Eubank  Jr. to take right now because he’s already in a position to challenge for a world title against the winner of the Gennadiy Golovkin vs. Ryota Murata unification match.

Surely, Eubank Jr. won’t want to chance it against Saunders unless the money makes it worth it. Eubank Jr. has seemingly lost a lot from his game over the years due to his aging, being inactive, and fighting domestic-level opposition instead of top-tier-fighters.

Eubank Jr. is the same age as the 32-year-old Saunders, and he looks just as depleted as him.  The difference is, Eubank Jr’s lower-level opposition that he’s been routinely facing in the last four years has helped him disguise the ravages of time on his body.

“When Eubank Jr. can outbox something, that’s when you know you’ve had a bad night.

“His [Eubank Jr] boxing ability is like a baby giraffe that just came out. It was terrible. To try and imitate the type of the great Roy Jones Jr, it’s not even boxing. I’ve seen Liam spar better than that. I’m not making excuses,” said Saunders about Eubank Jr.

“You can’t say it was a good performance because if you listen to the commentary, without the knockdowns, they had it close. It wasn’t a Muhammad Ali or Roy Jones Jr. type of fight,” said Saunders about Eubank Jr’s win over Liam.

Eubank Jr’s trainer Roy Jones Jr. has tinkered with his fighting style, turning him into a poor imitation of how he used to fight.

It’s like painting by the number system for Eubank Jr, because he looks like he’s thinking too much before throwing shots, trying too hard to immediate Jones Jr’s style.

Eubank Jr.is getting away with crudely copying Jones because he’s facing 2nd tier domestic level fodder instead of world-class guys, but Saunders might be too much of a step up in class, even though he’s clearly past his prime at this point in his life.