Lubin vs. Gausha, Ennis vs Abreu quotes for Saturday on Showtime 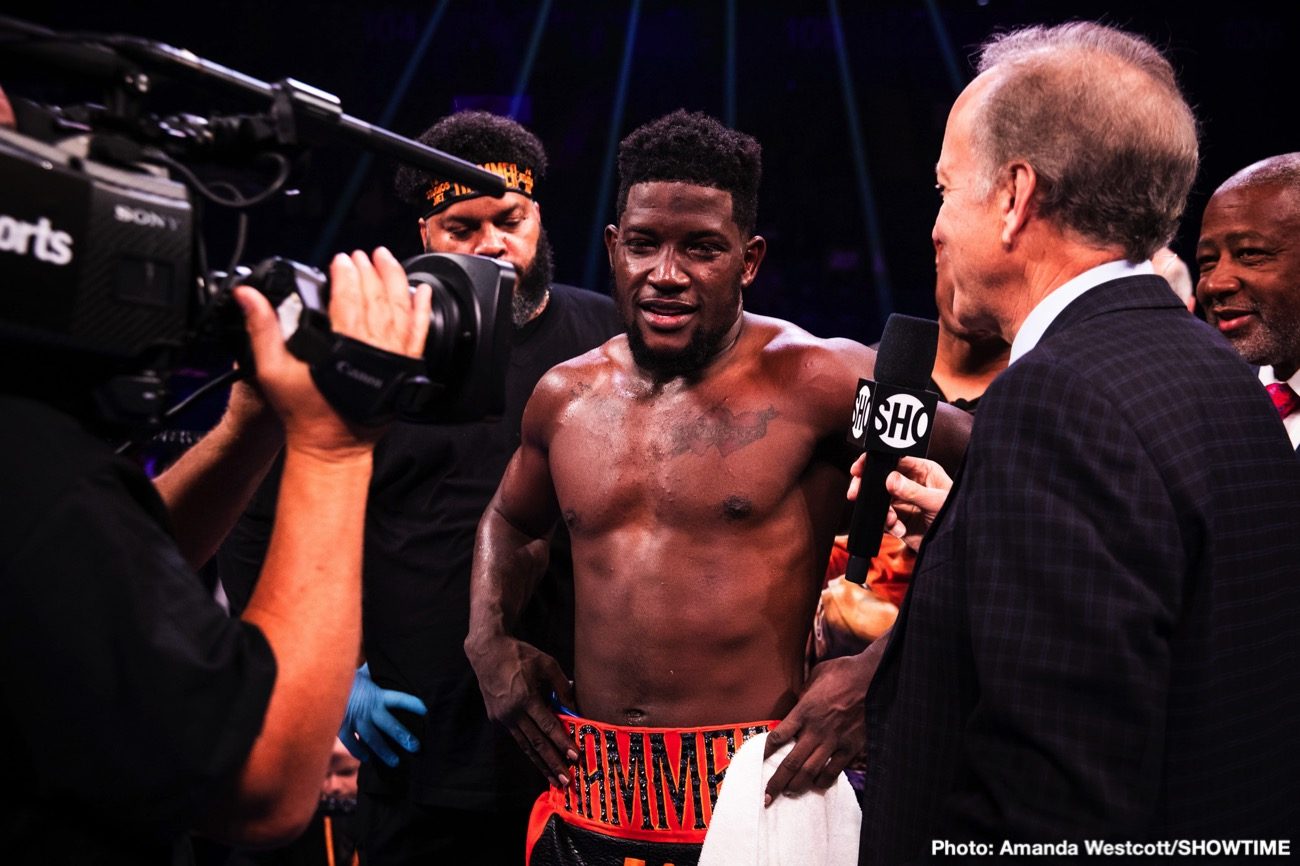 Other quotes from Tugstsogt “King Tug” Nyambayar and Cobia Breedy, They’ll meet in the 10-round co-main event, plus unbeaten welterweight Jaron “Boots” Ennis and the Dominican Republic’s Juan Carlos Abreu, who kick off the action live on SHOWTIME in a 10-round bout at 9 p.m. ET/6 p.m. PT.

“I had a tremendous training camp once again. Saturday night, I’m looking to go out there, look my best and come out with a dominant victory. I’m expecting Terrell to be dependable too. But the way I train, I’m going to have an answer for everything that he comes with.

“I remember watching Terrell back in his Olympic days. Now we’re in the pro ranks, though, so it’s a different story. He’s a solid fighter, but I feel like I’m on a different level than him. I’m planning on proving that on Saturday night.

“I always want to go out there and get the knockout. That’s what every fighter wants. If that doesn’t come, then I’m in shape and ready to fight 15 rounds if I had to. That’s the type of condition I’m in.

“These are great fights to get me ready for another title shot. Fighting for a title at such a young age did a lot for my game. It helped me get to that next level. This next go around for the title will be different. I feel like I’m at my best right now.

“I’m fighting for that mandatory spot for the winner of Jermell Charlo vs. Jeison Rosario, and I’m looking forward to getting in the ring to fight one of those guys. I’m excited to fight for not just one strap, but all three. And I’m not just chasing Jermell Charlo. I’m chasing those titles. If he wins, so be it. I want those belts.

“I train to go in there and make a statement. That’s what I’m looking forward to Saturday. I have to be steps ahead of him. My boxing skills are the best in the division, and I’m going to show it Saturday. Anything he thinks he can do, I can do better.

“I did some studying on Gausha. I looked at the Erislandy Lara fight, the Austin Trout fight, and a few other fights. My trainer looks into that more than I do. I saw what I needed to see. We put together a game plan that we’re ready to execute on Saturday night.

“I think Gausha has some problems with southpaws, but I’m not focused on that. I’m focused on my game plan and coming out victorious Saturday night.

“I have to go out there and win, but I also have to win in style. And I have to look good at winning. I feel like my advantage is that I’m more determined than he is. I’m younger, and I believe that I have the edge in almost every department. I know that I’m a couple of steps ahead of him.

“The loss was something to learn from. It was also disappointing because I dared to be great. I learned that experience is a great teacher. I took that from the Charlo fight, brought it with me, and bounced back. I’m still bouncing back in a great way, and I’ll soon take over this division.”

“We had a good training camp, and we are in shape and ready. On Saturday night, I’m going to put out my best performance to date and win.

“I’m expecting Erickson Lubin to come in ready. I’m expecting a good fight. We both know what’s on the line and that a title shot awaits us. But I’m looking to make a statement and take control.

“It’s an excellent opportunity for both of us. I’m looking forward to fighting for the titles next. Whatever we have to do, we’re going to do. We can box, or we can bang. We will do whatever we need to do.

“Ohio always has the true players in the game. When you think of this sport, you’ve got Rau’Shee Warren, Robert Easter Jr., myself, and the list goes on and on. I’m happy to be from Ohio, and especially the city of Cleveland.

“Lubin is the favorite in this fight, but I’m no stranger to being an underdog. I’ve been with [trainer] Manny Robles a long time, even before I went pro and making the Olympics. We work well together.

“I’ve seen all the top guys in my division, and I’ve seen them hold all the belts. I know Jeison Rosario and [Jermell] Charlo fight next week, but I can’t look past Saturday night.

“I like the style matchup heading into the fight with Lubin. He wants to stay busy and press the action, and I think that’s better for me and gives me a chance to catch him.

“I had an excellent training camp, and I’m ready for Saturday night. We had the same problems that everyone else had training during the pandemic, but we stayed safe, and we’re prepared for this fight.

“It wasn’t my night against Gary Russell Jr., but now I’m a better fighter. I was waiting too much against Russell, and I let him control the fight. And I have to be in control of the battle from the beginning until the end.

“I had a bit of an ankle sprain heading into the fight against Russell. I wasn’t able to use my movement as much as I wanted. It was a mild injury, but it caused me to have a lot less running in training. It just wasn’t the best, ‘ King Tug.’ I would happily rematch Gary Russell Jr. I would love to fight him again because I think it would end differently.

“I have watched a couple of fights from Cobia Breedy, and he’s a good fighter. He’s a tough competitor, but we’ll see what happens Saturday. I’m going to bring my best.

“This is going to be a much better performance from me. I’ve had eight weeks of hard training, and I’m mentally better than ever. I’m going to put on a good show Saturday.

“The change in opponent made no difference to me. We train to win no matter what. We want to get this win and move to the next step, winning a world title.

“It doesn’t matter what kind of style he brings to the ring. We’re ready for anything he brings on Saturday night. I’ve worked hard, and I think I’m going to stop him in the middle rounds.”

“I live in the gym, so I’m always ready whenever the phone rings. I don’t have to get prepared. We had a tremendous camp for this fight. I was initially scheduled to fight later in September, so I jumped on this opportunity to face Nyambayar when the opportunity came. I’m ready for anything that happens on Saturday.

“When I was 11-0, Barry Hunter called me to spar with Rau’ shee Warren, and me and my coach fell in love with the Headbangers team. Barry has come on board and given us help to get us to the next level.

“I’m never under pressure because I know that I’m doing this for. And I’m doing this for my people back home in Barbados. I’m doing it for my family, my wife, and everybody who supports me. I’m going to show everyone who ‘Soldier’ Breedy is.

“Me and my coach have this thing called the seven styles of boxing. People say I fight like Tim Bradley, Manny Pacquiao, and Floyd Mayweather – and that’s where my particular types come into play. I even have some old school Joe Frazier that comes into play. It depends on what Nyambayar brings to the table. Whatever he has, we’re going to match him.

“I have to show the world what I can do. I’m not worried about how he fought against Gary Russell Jr.; that was a good win for Gary. Tug is a good fighter. He’s accomplished a lot, but he hasn’t fought a soldier yet. Saturday night, he’s going to be facing something different.

“Being a world champion from Barbados would make history. It would be great for my people. Boxing in Barbados is not a big thing. It’s different there. Me bringing back hope for my country would be a fantastic thing. I could show kids there that you can come from Barbados and follow your dreams.

“I’ve been around many world champions in training, so I feel like I know what it takes to get to the next level. Now I have to show it in the ring Saturday.”

“We never prepare one way for one person. And we prepare all the way around because you never know how that guy is going to come out. We mix everything up.

“Whatever he brings, we are going to be ready. I’m going to go out there, do my thing, be smart, have my fun, and get that stoppage at the end of the night.

“My last fight, I did right, but there were a lot of things I watched that I could have done better – so that’s what we worked on in this camp, and you guys will see on Saturday night. Being more relaxed and not rushing and letting it come to me.

“You’ve just got to let the knockout come. You’ve got to feel it; you can’t just go in there and go for the dish. That’s how you get tired and lose your cool or even get hit with punches that you shouldn’t be getting hit with.

“Most definitely I’m ready for a title shot, I’ve been prepared. After Saturday night, I’ll probably get a title eliminator, and then sometime in 2021, I’ll be world champion.

“It feels great to put Philadelphia on my back. I can’t wait to perform and show the rest of the world my talent on Saturday night.”

“I’m feeling great, and I prepared very well for this fight. I’m ready to show the best version of myself on Saturday night.

“I know Ennis is a promising young fighter, so it’s going to be his youth versus my experience. I’ve fought many younger fighters with good abilities, so we’ll see what he has on Saturday. My losses have given me the wisdom and experience to deal with someone like Jaron Ennis.

“My fellow Dominican Jeison Rosario winning his titles gave me a lot of motivation and gave the whole country a lot of encouragement. It showed me that we could make it to the top level, and it helps me keep pushing forward.

“Ennis is a good fighter just like all the prospects I’ve faced. I think they put him in over his head. I’ve never been knocked out. So he’s going to have to fight. This is going to be his first actual fight.

“If he stands and fights, it’s better for me. That’s what I want. I want one of us to get knocked out. If he is in front of me, it’s a better chance for me. I’m not afraid of losing, but I’m coming to win.”


« Luke Campbell vows to “punish” Ryan Garcia for his trash-talking