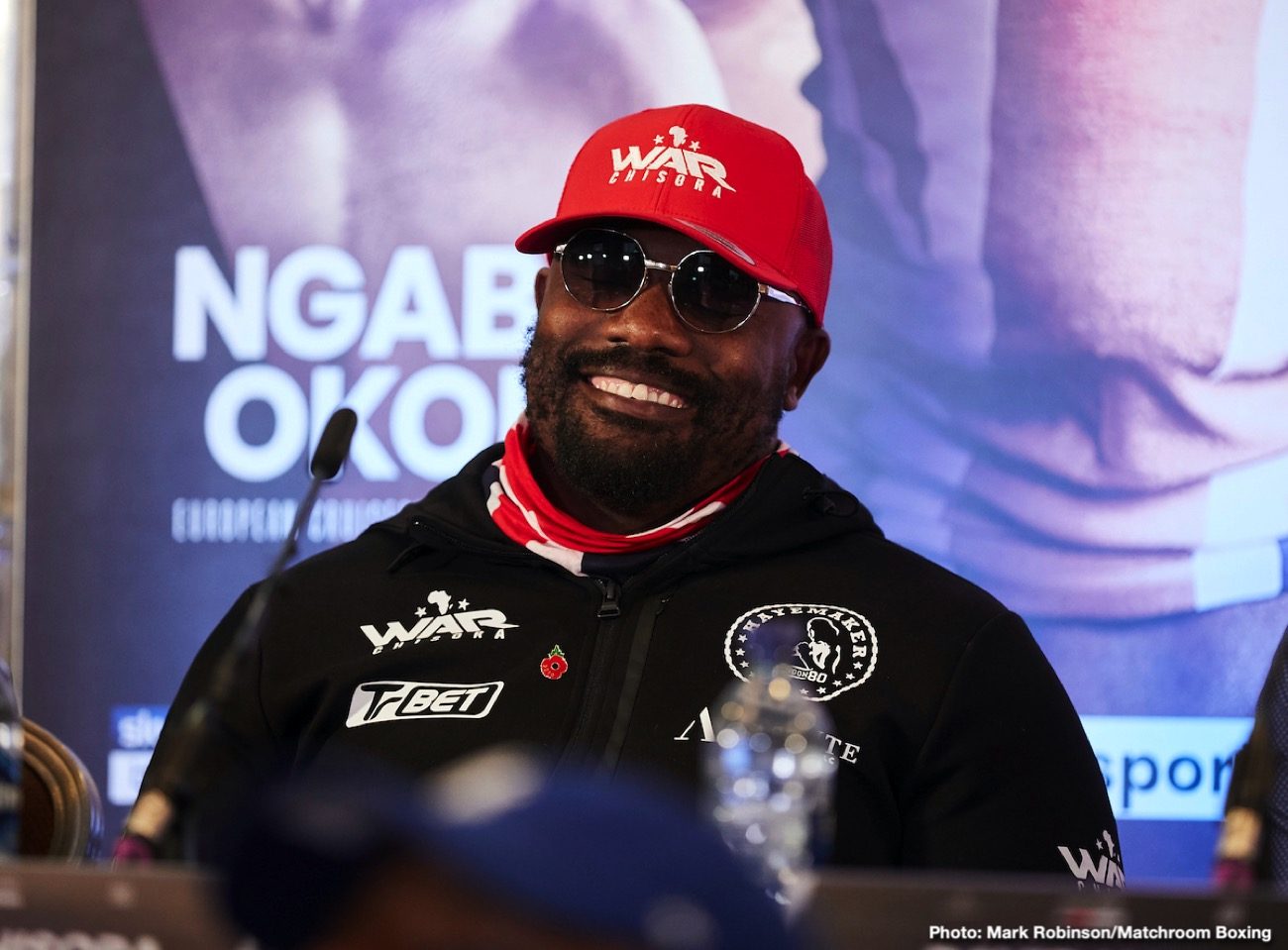 By Jeff Aronow: Dereck Chisora feels bad for Dillian Whyte after watching him lose to Alexander Povetkin last August. Chisora says Whyte (27-2, 18 KOs) had worked so hard as a professional, building himself slowly to get to the level he was at after years.

The WBC never gave Dillian his shot at the title, even though he’d been mandatory for over a year.

Dereck feels that with all the fights that Whyte was taking while waiting for his title shot, sooner or later, he was going to get knocked out. He was taking a lot of hard fights while waiting to challenge for the WBC title against Tyson Fury, but it came unraveled for him against Povetkin (36-2-1, 25 KOs) on August 22 at the Matchroom Boxing Fight Camp.

Also, Chisora points out that Whyte had replaced his longtime trainer Mark Tibbs, and he feels that factored into his loss. It’s unclear how Whyte having Tibbs in his corner would have helped him take the powerful left uppercut from Povetkin in round 5 that knocked him out cold.

“I’m not shocked [about Dillian being knocked out by Alexander Povetkin] because if you look at Whyte’s whole corner, all those guys were on my payroll,” said Chisora to IFL TV. “Two things. The Russian knew he couldn’t stay in there with Dillian, so he was setting up a couple of shots.

‘I think Dillian was worried about the left hook all the time. So he started dipping all the time and opened up for the uppercut. On the one hand, I feel bad for Dillian. He only took all these fights is because that’s what they were giving him.

“He boxed for the Silver for the WBC Silver against Robert Helenius in Cardiff when AJ boxed [Carlos] Takam]. This was a couple of years ago. Suddenly, they keep prolonging him, and I feel bad for him. Then he had to take the fight. ‘Deontay Wilder doesn’t want to fight you. This is for the WBC.’

“The WBC is saying fight him. Sooner or later, he’s going to get caught, and that’s what happened. He got caught at the wrong time. And he split with his trainer Mark Tibbs, which he was supposed to be with Mark Tibbs.

“He boxed in Saudi at 19 stones, and he came out of that fight really good. I think he should have got back with Mark. Yeah,” said Chisora when asked if he feels the absence of Tibbs in Dillian’s corner was crucial for what happened against Povetkin.

Povetkin might have realized that he couldn’t live with Whyte for long on the night, so he was looking for one shot. It worked out well for Povetkin, as Whyte was in the perfect position to be knocked out in the 5th.

Dillian had been waiting for his title shot for a long time with the World Boxing Council, but it wasn’t happening.

“I want to fight, and Eddie wants a crowd as well,” said Chisora to IFL TV. “What Eddie did in his back garden at the Fight Camp was great. It was great for the lighter weight guys that had never boxed in front of a crowd. 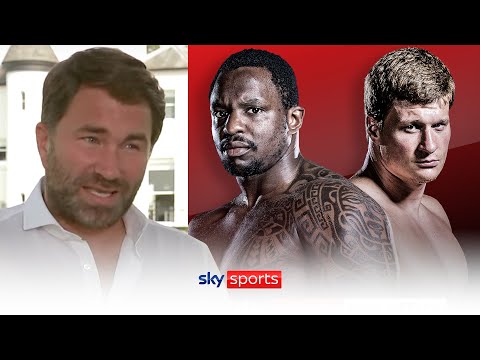 “When the ‘Body Snatcher’ [Dillian Whyte’ boxed there, if there were a crowd, he would have won the fight because he was winning the fight easily, and he got caught.

“The only thing you could hear in there was punches. Listen, it’ll be hard to fight with no crowd. He is coming out for the 10th round, trying to lift yourself up. It’s very hard. Even football players have it hard not to play football with no crowd. I’m just saying how I feel. It would be hard, but the fight must go on. You have to adapt. I’m just waiting to hear what’s happening.

“Oh, good for him,” said Chisora when asked about Usyk constantly chanting his name on social media. “Good for him. In his mind, he thinks I’m going to pull out of the fight. Apparently, he wants the fight, and I want the fight. So it’s going to happen. He’s a great ambassador to the sport,” Chisora said of Usyk. ”

It’s less of a case of Usyk worrying about Chisora pulling out, and more of a situation where he’s trying to scare him. When the two met for the kickoff press conference, Chisora looked intimidated in Usyk’s presence, which wasn’t lost on the Ukrainian.

He could see Chisora’s fear, and that’s why he was so cocky. In Usyk’s past fights, when interacting with fighters that showed no fear of him, Usyk was less bold. In this situation, Usyk is reading Chisora like a book and actively trying to frighten him even more, possibly hoping he’ll pull out.

Usyk has got to be worried himself, though. Otherwise, he wouldn’t resort to primitive intimidation tactics. 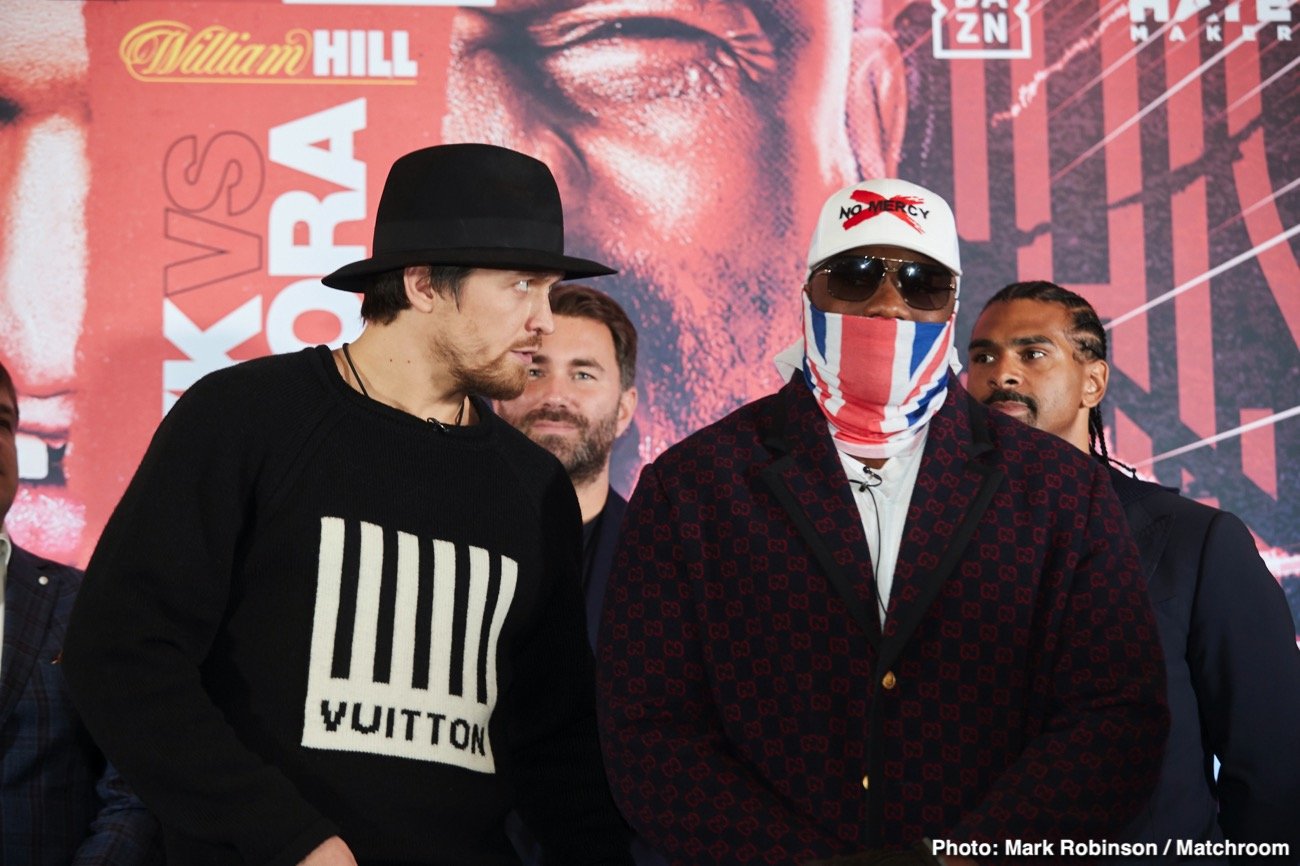 Whyte chose to fight on the inside

“He [Whyte] boxes at long range, and this time he was boxing on the inside for one reason or another,” continued Chisora. “I don’t understand. He needs to sort it out himself. The biggest downfall for man is pride.

“He’s going to put his pride. First, that’s what he’s going to do. Even if he wins the rematch, he has several thousand days. It’s a hard one because Tyson is fighting Deontay Wilder in December. After that, it’ll be AJ and Tyson trying to make the numbers right. Then they’ll try and lock in a two-fight deal. It’s hard.

“I think the problem is Dillian wasn’t warmed up,” said Chisora on why Whyte didn’t finish Povetkin after hurting him in the fourth. “Povetkin is a slow starter, and they’re both slow starters. So they’re both warming each other up.

“It’s about who lands the first punch, but if Dillian had swung from round one, guns all blazing, the fight would have ended in the second or third round. Povetkin was landing some good body shots. The body shots were getting in.

“People don’t realize that Dillian was nervous about the body shots. Every time Povetkin was throwing, Dillian was covering. When he covered, he dropped in there. All he got was, ‘say hello to my little friend, boom,'” said Chisora.

Whyte tried to fight Povetkin on the outside, but the Russian kept moving forward to get in close. Dillian doesn’t have the best legs to move around the ring, which meant that he was forced to fight on the inside.

Chisora in favor of Dillian taking a rematch in November

“Yeah, we’re fighters. I can’t say anything else,” said Chisora when asked if Dillian is doing the right thing in facing Povetkin in November. “It’s the right thing. ‘Yeah, I got knocked out. I want the rematch right away.’

“People are going to want to watch it now and see what happens. It’s a good rematch in November, yeah. If he trains right and prepares right, he wins the rematch,” Chisora said of Dillian. “Everybody is going to have that psychology in the background.

“If he trains right, he does right, and he’ll end it. How many weeks is it before the fight? [nine weeks]. That’ll be good because he might go to Russia now. Things happen. He got knocked out. I felt bad for him [Whyte] because this is a guy that never boxed in the amateurs, and he never had the pedigree.

“He worked himself hard fighting on those dead shows, trying to make it. He’s broken through and is going the paper route, and he’s selling out arenas.

“And then he wins a great fight [against Oscar Rivas] to get the WBC Silver, and then they don’t give him his shot to the title. I felt terrible for him.

It’s still foolhardy for Whyte to be fighting Povetkin just three months after his August 22 knockout. Dillian has a lot to lose in taking this fight, seeing that if he loses again, his career will be damaged.

WBC can create a new belt for Whyte: ‘Anybody Can Get It’

“You have to understand. That’s wrong. If it’s your destiny, that knockout by Alexander Povetkin is nothing,” Dereck said about Whyte. “When he gets the rematch, and he fights again, he’ll forget about that.

“He needs to concentrate on his whole team, winning the rematch, and doing his thing. I’ve known Dillian for years, and he’s done amazing for himself. You can’t take that from a man, and you can’t hate a man for that. He’s worked hard. He hasn’t stolen it from anybody.

“He’s actually put the work in and worked hard for it. I think Matchroom should fight for his corner to get him a title shot afterward, but guess what? They won’t. Because you see, the money fight is Tyson Fury and AJ.

“The money isn’t in Dillian and Tyson Fury. They’ll [WBC] probably make another belt. What’s this one that they fought for last time? Diamond belt? He got the WBC Silver.

“Who’s got the WBC Silver now? So now they got to make another belt for Dillian called ‘WBC Anyone Can Get It.’ It’s weird. There should be one belt and one champion. Now they’re [sanctioning bodies] just making stuff up,” said Chisora.

Whyte is still going to need to wait over a year for his title shot if he beat Povetkin in their rematch in November. IBF/WBA/WBO heavyweight champion Anthony Joshua and WBC champ Tyson Fury will be fighting twice next year, and WBC isn’t going to get in the way.

Had Whyte not lost to Povetkin, he would be able to force his title shot against Fury next February.


« Lubin vs. Gausha, Ennis vs Abreu quotes for Saturday on Showtime

Canelo Alvarez vs. Gennadiy Golovkin III: Will this fight happen in 2021? »