Dillian Whyte: I only need to make minor adjustments for Povetkin rematch

By Charles Brun: Dilian Whyte believes that he only needs to make “minor adjustments” to beat Alexander Povetkin in their rematch on November 21 in the UK.

Despite being knocked cold in the 5th round by former WBA heavyweight champion Povetkin (36-2-1, 25 KOs) in their match last month on August 22, Whyte (27-2, 18 KOs) doesn’t feel that he needs anything more than a small tweak in his game plan for him to come out victorious next time.

In watching the fight back, Povetkin threw some left hooks and right hands in the first two rounds that had knockout written all over them. The shots just barely missed Whyte.

If those shots had landed, Whyte would have been knocked out even earlier, and it wouldn’t be something that “minor adjustments” could fix.

If Whyte, 32, is wrong about his theory on what he needs to do to beat Povetkin, then his career will be the equivalent of meteor dust. There won’t be anything left for his wily promoter Eddie Hearn to try and reassemble to fix him.

A second knockout loss for Whyte will be so disastrous and perhaps the finish of a promising career.

The smart thing would be for Whyte NOT to fight Povetkin immediately, but it’s too late for that. Whyte has already given Hearn his marching orders to set up the rematch, and he’s already faithfully done so. Whyte has already made his decision, and he’s got to try and make the best of it.

What you hate to see is Whyte squawking about only needing to make minor adjustments. It’s troubling when you hear Whyte talking like that because of its a clear sign that he’s in denial still about what happened to him.

He’s been trying to come up with a rationale for why he was knocked unconscious by Povetkin, and the only thing he can say is he wasn’t switched on.

It’s challenging to train someone like Whyte because you know you’ve got to try and breakthrough that barrier of resistance that he has in facing the truth.

The way Whyte is talking, he seems to be distancing himself from his knockout loss by simplifying it, and not understanding the fact that he was in with a guy that was a better fighter.

It would be interesting to hear what Whyte plans on doing in the rematch with the 41-year-old Povetkin for him to prevent the same result occurring again. We’ve all heard the recommendations about Whyte not leaning forward so much, which leaves him vulnerable to Povetkin’s uppercuts.

Whyte has always leaned forward when he fights because he likes to throw hooks, and to get power on those shots, you got to learn ahead. Try throwing while standing straight up.

You’re not going to get any power on the shots, and that’s why Whyte is always leaning forward because he’s in love with his hooks. He’s like another ‘Left Hook’ Lacy with his habit of throw those types of punches.

“His options are much more limited than my options, even though I lost,” said Whyte. “You might think I’m crazy saying this, but that’s how I feel anyway. No, there’s not going to be any changes. My team stays the same.

“I was very patient and very calm,” Whyte continued. “I was letting him miss the punches that he usually takes people out with. That little overhand right that he throws and that left hook,” said Whyte.

Dillian has an upside-down view of his fight with Povetkin, and he needs a trainer to sit him down and tell him straight. Povetkin is the one with more options, NOT Whyte.

The blueprint in how to beat Whyte has already been created, and Povetkin is going to follow it each time like a well-schooled fighter. Povetkin is from the old Soviet system, and those fighters study their opponents like scientists.

He saw that Whyte is vulnerable to uppercuts, and he always has been. Oscar Rivas dropped Whyte with a peach of an uppercut in the 9th round in July of last year in their WBC title eliminator.

Dillian was lucky to get back to his feet after that knockdown because he looked glassy-eyed and entirely out of it. If Rivas had more talent, he would have finished him off.

In 2018, Joseph Parker dropped him with an uppercut in the 12th round. Had Parker a little more time in the round, he would have finished Whyte off.

Dillian wants to be a little sharper

“I was making him miss, and I was countering him all the time,” said Whyte about Povetkin.

So, Whyte just needs to be a “little bit sharper” to beat Povetkin, eh? I don’t buy it, and that’s not how I see it. Whyte needs to be A LOT more sharper, and he’s got to have a better game plan than just trying to rough Povetkin up and throw left hooks all the time.

Dillian views  Povetkin in a distorted way, and he doesn’t seem to grasp the fact that the game plan that he had, it was never going to work against him. Until Whyte understands that he needs wholesale changes to his game, he’s going to be making forward to another guaranteed knockout loss.

It would be a good idea for Whyte to clean the house by sweeping out his current trainer and going back to Mark Tibbs. That would be the first thing I would do if I were Whyte. Dump his current trainer, go back to Tibbs, and find a second trainer to help him on defense.

It would also be a good idea for Whyte to forget about throwing hooks or body shots in the rematch because Povetkin will key on that tendency and tag him with uppercuts when he leans forward. Whyte has a good enough jab and an overhand right to where he doesn’t need his hooks or body shots to win. 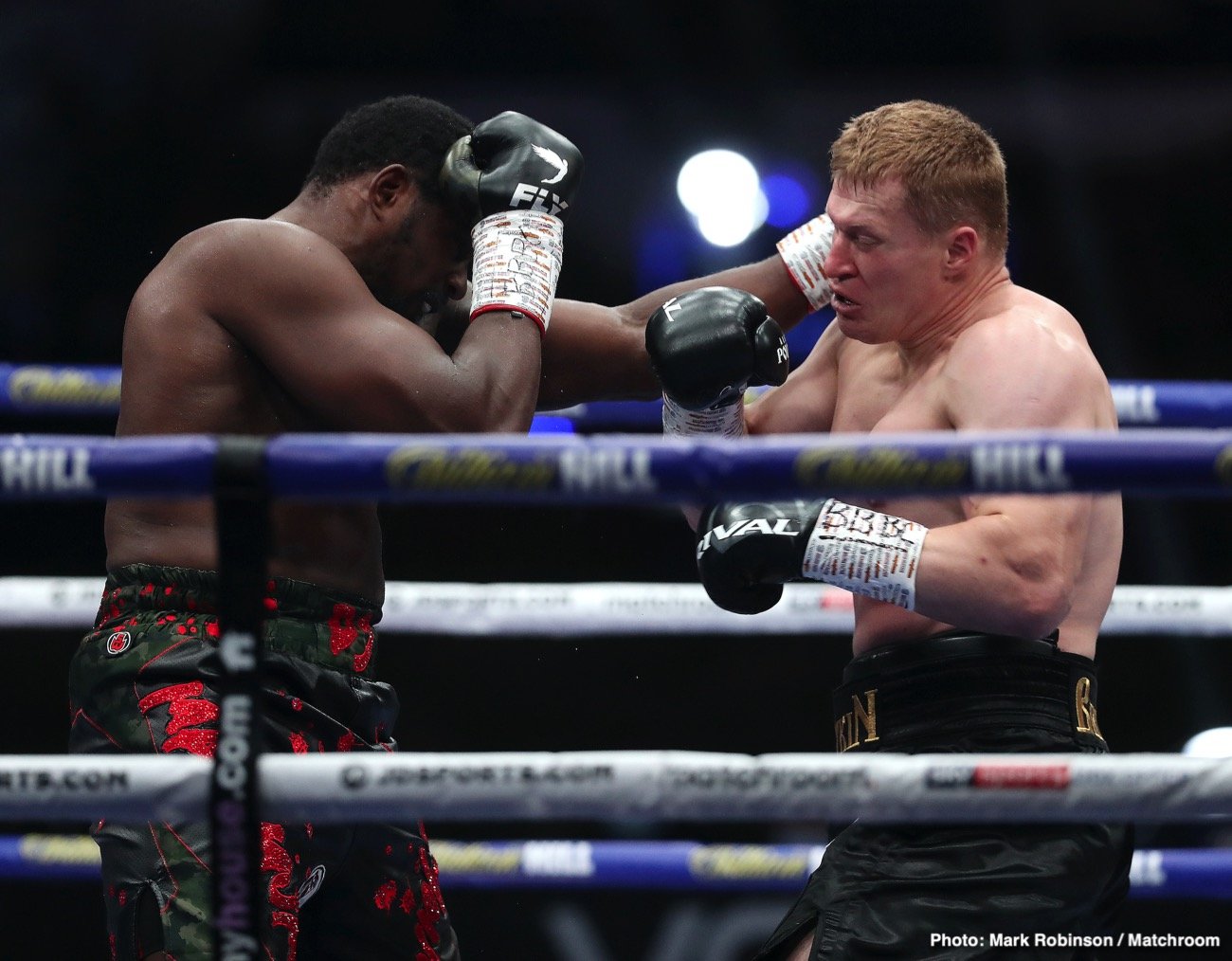 He can dominate with his jab and right hand alone. As much as Dillian likes to throw hooks and body shots, he won’t limit his use of those punches in the rematch with Povetkin. As such, Whyte’s about to meet his destiny on November 21, and it won’t be pretty.


« Thorslund vs Radovanovic As Boxing Returns To Denmark On Sept. 26