Thorslund vs Radovanovic As Boxing Returns To Denmark On Sept. 26 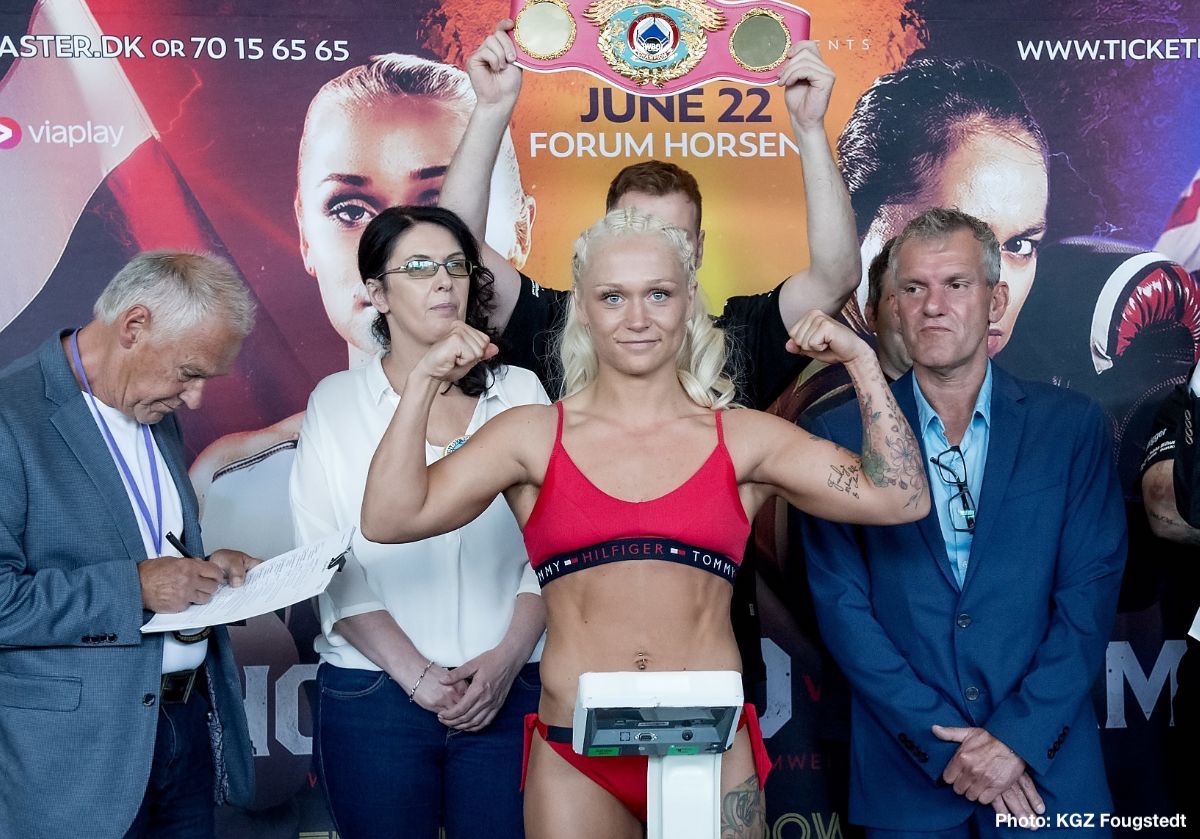 Serbia’s Nina Radovanvic (14-3, 3 KOs) says she has never felt more prepared for a fight as she challenges Denmark’s Dina Thorslund (14-0, 6 KOs) for the WBO Super Bantamweight World title this Saturday night at the Struer Energi Park in Struer, Denmark.

Thorslund will be defending her WBO Super Bantamweight World title for the third time and is headlining at the Struer Energi Park for the fifth time, the same arena where she won the belt in August 2018 against Jessica Arreguin Munoz when she produced a career best performance to win by a wide points decision.

Despite her experience, Saturday night will be Thorslund’s first title defence against a former World Champion and Nina Radovanovic says she has never felt better heading into a fight.

“I feel better and more prepared than I’ve ever felt in my career,” said former IBO World Champion Radovanovic. “I’ve had plenty of time in camp and I’m ready for the highest level on Saturday night.

“There are weaknesses in Dina’s game we have identified, but you’ll see me exploit them on Saturday night,” Radovanovic continued. “She has to deal with me before looking too far into the future!”

Thorslund has stated she that she doesn’t believe Radovanovic will be able to withstand her power and has forecasted an early stoppage, but Radovanovic is unfazed by her opponents pre-fight predictions.

“It’s nice to predict fights,” said Radovanovic. “But it’s not something I do myself. I’ll fight my best and do my job on Saturday night – I’ve been preparing for this moment all my life. This is a great chance for me and I’m not going to let this opportunity pass me by.”

WBO Super Bantamweight World Champion Dina Thorslund (14-0, 6 KOs) is planning on a knockout victory over Serbia’s Nina Radovanovic (14-3, 3 KOs) when they meet on September 26th at the Struer Energi Park in Struer, Denmark.

Thorslund, who is also trained as a physiotherapist and personal trainer, has implemented her expertise to increase her punching power as she plans on claiming the seventh knockout victory of her professional career.

“If I see the opportunity, I will take the chance to end the fight before the last bell,” said Thorslund. “Radovanovic has been on the deck before after being hit downstairs. I’m a good body puncher so if I hit her well, I expect her to go down!

“I think this training camp has given me more power,” continued the unbeaten 26-year-old. “I’ve introduced CrossFit into my training regime and by working on different movements I have improved my stability and balance. And with greater stability you can hit better, so I feel like I have really benefited from these changes.”

Thorslund, who will defend her WBO Super Bantamweight World title for the third time on September 26th, last fought in June 2019 when she comfortably outpointed mandatory challenger April Adams. After an extended period outside the ring, Thorslund is looking forward to stepping back through the ropes.

“I’m so excited to be fighting again! I can’t wait to get into the ring again and hear the fans in Struer. It’s been a long wait but I’ve kept myself ready and I’m in super shape. My opponent comes to fight and will give everything to become a World Champion, but I don’t think she can last 10 rounds with me.”

Thorslund reunites with promoter Team Sauerland to deliver another exciting night of boxing in Struer. The Danish star will be headlining her hometown arena for the fifth time as she makes a third defence of the WBO title she claimed with a unanimous points win over Jessica Arreguin Munoz in 2018.

“I am happy to be working with Team Sauerland again. The cooperation works really fine. It gives me some peace of mind in the build up to the fight, as I know they know what they are doing, so I just have to concentrate on boxing.

“The pandemic put an end to me being able to fight, but my motivation hasn’t been affected. It’s the same as it was before and I’m 100% motivated. People can expect a top tuned Dina on September 26th. I have been training and waiting a long time for this fight, so I expect to be sharper than ever.”

Thorslund can expect a tough test as she returns to the ring for the first time following her points victory over April Adams in June 2019. Her opponent Radovanovic is an experienced contender. The 28-year-old Serbian is a former IBO World Champion, who has also fought twice for WBC honours.

“I’m very excited to face Dina,” said a confident Radovanovic. “I’ve watched a few of her fights and it seems that we have a similar temperament. She is a strong fighter and I believe the fight will be very attractive for the audience.

“I’ve had several title fights. They’ve always been exceptional and I have gained a lot of experience from each one, which I will use to my advantage. It’s nothing new to me to fight away from home in my opponent’s country. I love it! It’s what I’m looking forward to. I believe the Danish fans will be in for a surprise.”

“We’re delighted to be bringing boxing back to Denmark,” said promoter Nisse Sauerland. “We’re happy to be working with Dina once again, and excited to return to Struer for the fifth time, where we will be working with TK Promotion to ensure another spectacular night of boxing at the Struer Energi Park.

“In light of the Covid-19 pandemic, we will of course be taking all necessary precautions to ensure the safety of spectators, fighters and officials. We will be working closely with the Danish Professional Boxing Federation, and will continue to follow the latest guidance and advice from Danish authorities.”

Hailing from Gilleleje, Mollenberg is widely considered to be one of the most exciting talents coming out of Denmark having won the Danish Championship three times and the Nordic Championship once before turning pro last year. The 19-year-old welterweight, who was last in action on February 29th scoring a first round knockout, will face the tough Serbian Nikola Vlajkov (6-5-1, 2 KOs) over six rounds in Struer.

Skilful featherweight Akbari will be fighting professionally for the second time in his career, having secured a dream debut first round knockout victory over Sergej Vib in his hometown of Ringkobing.

Fellow 19-year-old Jacob Bank will be making his professional debut following a stellar amateur career that saw him crowned a four-time Danish Champion one-time and Nordic Champion, across his eighty amateur bouts.

Thomas Madsen, Matchmaker for TK Promotions, believes the four Danish future stars will be a great addition for the fans in Struer.

“We bring three of Danish boxing’s great talents into the ring and we look forward to leading them towards titles and big fights,” said Madsen. “We are very excited to partner with Team Sauerland and look forward to giving our boxers the opportunity to fight on the big stage.”

Promoter Nisse Sauerland: “Fans can look forward to a spectacular show on September 26th in Struer. We have a great mix of young and established talent. Not to mention a future heavyweight champion in Filip Hrgović on the card. We are back with a bang! This is going to be an incredible event that you do not want to miss.”

Dillian Whyte: I only need to make minor adjustments for Povetkin rematch »