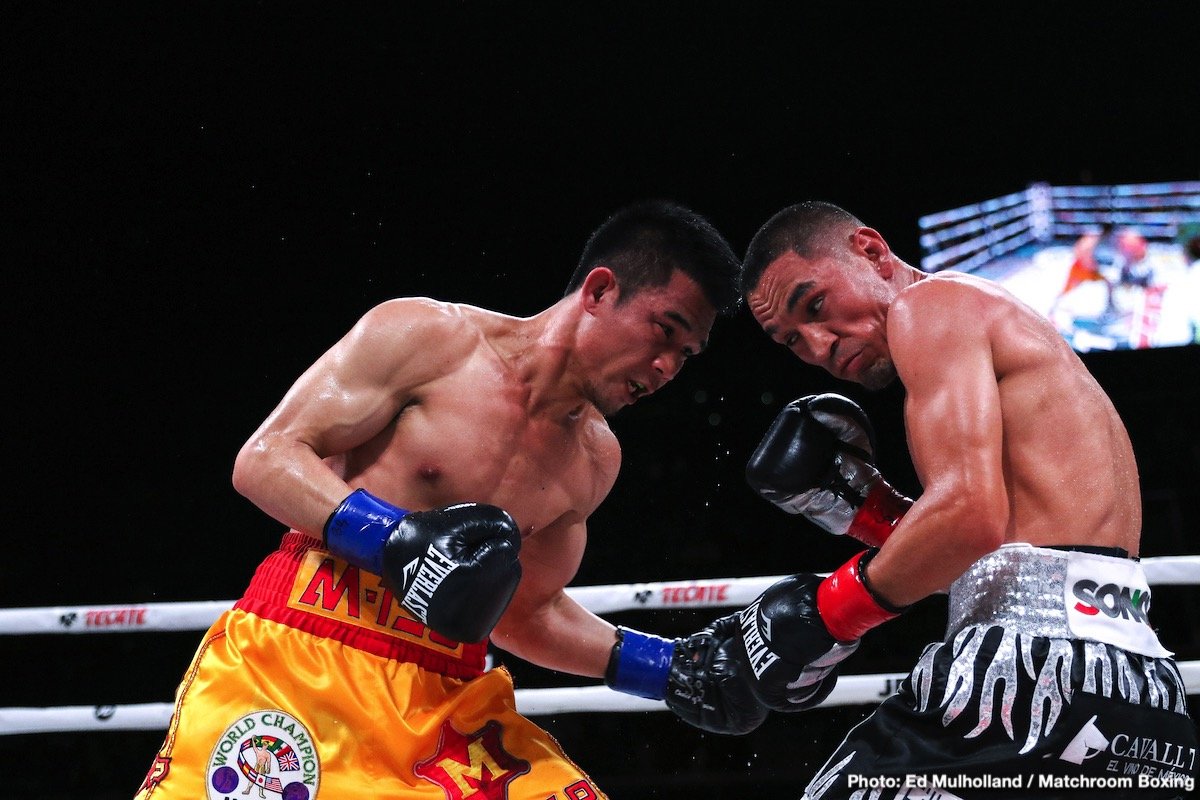 By Jim Dower: In what shapes up to be a slaughter, former two-time WBC super flyweight champion Srisaket Sor Rungvisai will be facing former IBF flyweight champ Amnat Ruenroeng on August 1 at the Workpoint Studio in Thailand.

DAZN will likely stream the Rungvisai-Ruenroeng fight to the U.S boxing fans. Rungvisai, 33, will be coming off of a long 16-month layoff when he returns to the ring to face fellow Thailand fighter Ruenroeng.

In Srisaket’s last contest, he lost a narrow 12 round unanimous decision to Juan Francisco Estrada on April 26 last year at The Forum in Inglewood, California.

If he fights like that against the well-seasoned Ruenroeng, he’ll lose to him. On paper, Rungvisai should wipe the deck with the aging Ruenroeng, but he won’t beat him if he fights in a passive way that he did against Estrada.

The Rungvisai-Ruenroeng contest would have been a good fight five to ten years ago, but not now. The 40-year-old Ruenroeng has lost three out of his last six matches, and he’s looking to shot to pieces at this point in his eight-year pro career.

If you want to put a positive spin n the Rungvisai-Ruenroeng fight, Ruenroeng has won his last two matches against Karoon Jarupianlerd and Brian Lobetania. The bad news is that those guys are relevant, so it’s not impressive that the two-time Thailand Olympian Ruenroeng (20-3, 6 KOs) beat them.

Rungvisai was supposed to face Ruenroeng earlier this year in Apri, but the fight was then rescheduled for May 2. Now here we are looking at a third date shift for the bout, and it’s hard to have faith that it’ll take place on the August 1 date. However, with Ruenroeng battling Srisaket behind closed doors at the Workpoint Studio in Thailand, that certainly increases the chances of the fight taking place.

Besides the interest from Thailand boxing fans in the Rungvisai-Ruenroeng match, it’s a confidence builder for Rungvisai. He needed a boost up from his poor performance against Estrada last year. Fighting the 40-year-old Ruenroeng should be just what the doctor’s ordered in getting Rungvisai’s mind right once again.

Ruenroeng has the ring IQ to win

With that said, if Rungvisai fights like he’s half asleep like he did against Estrada, Ruenroeng will beat him. Ruenroeng is a professional, and he’s a smart fighter, and he’s going to take advantage of any mistakes that Rungvisai makes in the battle. Rungvisai can’t afford to get off to a slow start against Ruenroeng because he’ll behind, and he may not be able to make up lost ground in the fight

Rungvisai was on his way to becoming a star in the U.S with his two wins over Roman ‘Chocolatito’ Gonzalez and his victory over Juan Francisco Estrada in 2017 and 2018. Unfortunately for Rungvisai, he failed to take advantage of the opportunity that he had.

After beating Estrada and Chocolatito, Rungvisai took two easy fights against Young Gil Bae and Hiram Irak Diaz rather than go straight into a rematch with Estrada.

When Rungvisai finally did get around to facing Estrada in April 2019, he was beaten. In another example of Rungvisai shooting himself in the foot, he didn’t fight again for the remainder of the year after losing to Estrada. Rungvisai threw away the last eight months of 2019, sitting inactive.

With the pandemic, now he’s lost the first six months of 2020. Only Rungvisai knows why he didn’t get back in the ring after his loss to Estrada. He should have fought someone in the second half of the years rather than sitting idle for eight solid months doing nothing.

Srisaket threw away a year of his career

At 33, you don’t throw away that kind of time on your career. Rungvisai was sabotaging his own career by staying inactive and fighting the wrong guys.

Ruenroeng went through a rough career patch between 2016 and 2018 in losing to Wenfeng Ge, John Riel Casimero, and Nawaphon Kaikanha. Those fights gave a strong indication of what Ruenroeng has left in the tank at his age. He’s going to be turning 41 this year, and he’s no longer the same fighter he was a decade ago.

Having Ruenroeng fight, a slugger like Rungvisai is the equivalent of him walking the plank off of a pirate ship. Ruenroeng is likely in for a horrible night unless his loss to Estrada is still haunting Rungvisai.

If Rungvisai is mentally there for this fight, the only way Ruenroeng survives to see the final bell is if he decides to carry him and take it easy on the 40-year-old. Don’t be surprised if that’s the case. Ruenroeng looked so bad in his loss to Casimero; it’s hard to imagine him making it through five rounds without Rungvisai intentionally going easy on him out of respect.

With all the time off that Rungvisai has had, hopefully, he can still make the 115-pound limit. He’s no spring chicken at 33, and it’s never a good idea for a fighter in his prime to sit on the couch for 16 months doing nothing. I imagine the fight will still go ahead even if Rungvisai comes in over the 115lb limit, but it would be a bad look on his part if he misses the weight. 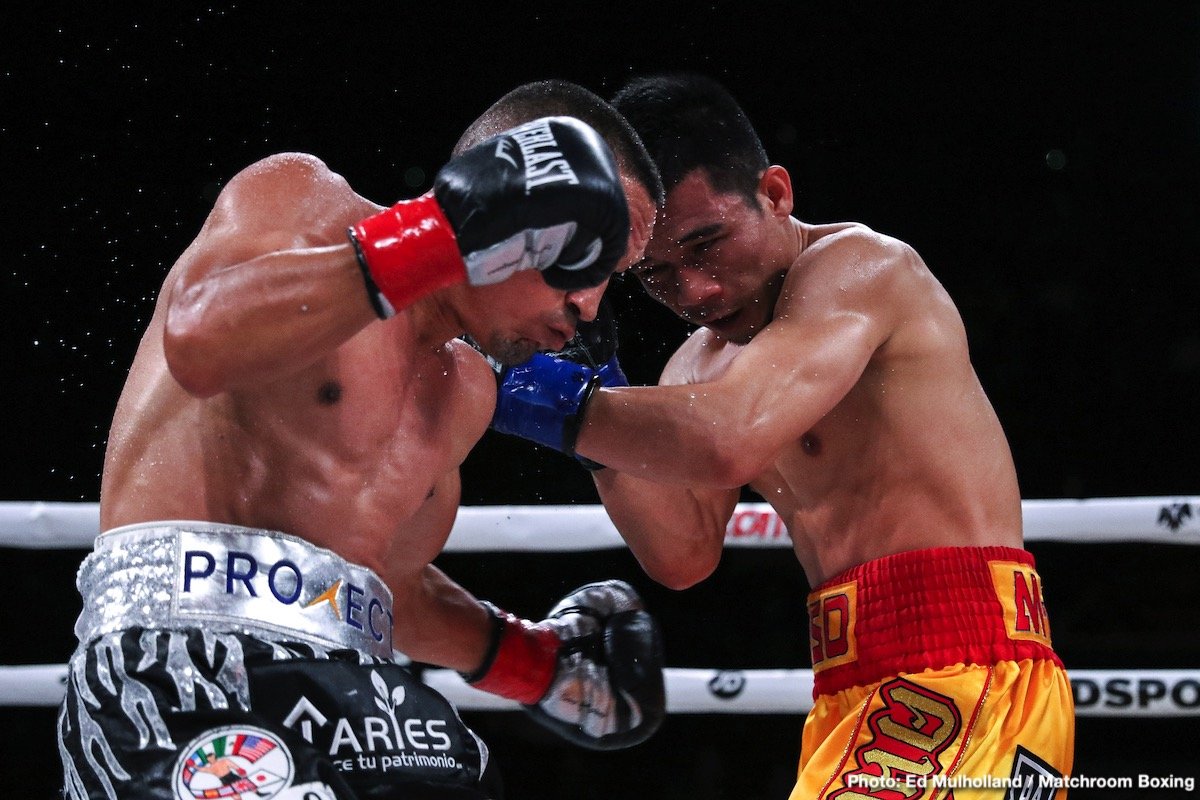 Ruenroeng isn’t the ideal opponent to get Rungvisai ready for a trilogy match against Estrada. That’s a fight that is being talked about by Matchroom Boxing promoter Eddie Hearn. He’d like to make that contest if possible in 2021, but it would be a good idea for Rungvisai to get some quality fights under his belt before he takes that fight.

When that fight takes place, Rungvisai is going to need to fight a lot better if he wants to win. He knows that Estrada is going to use a lot of movement on him, and he’ll be looking to throw combinations like last time.