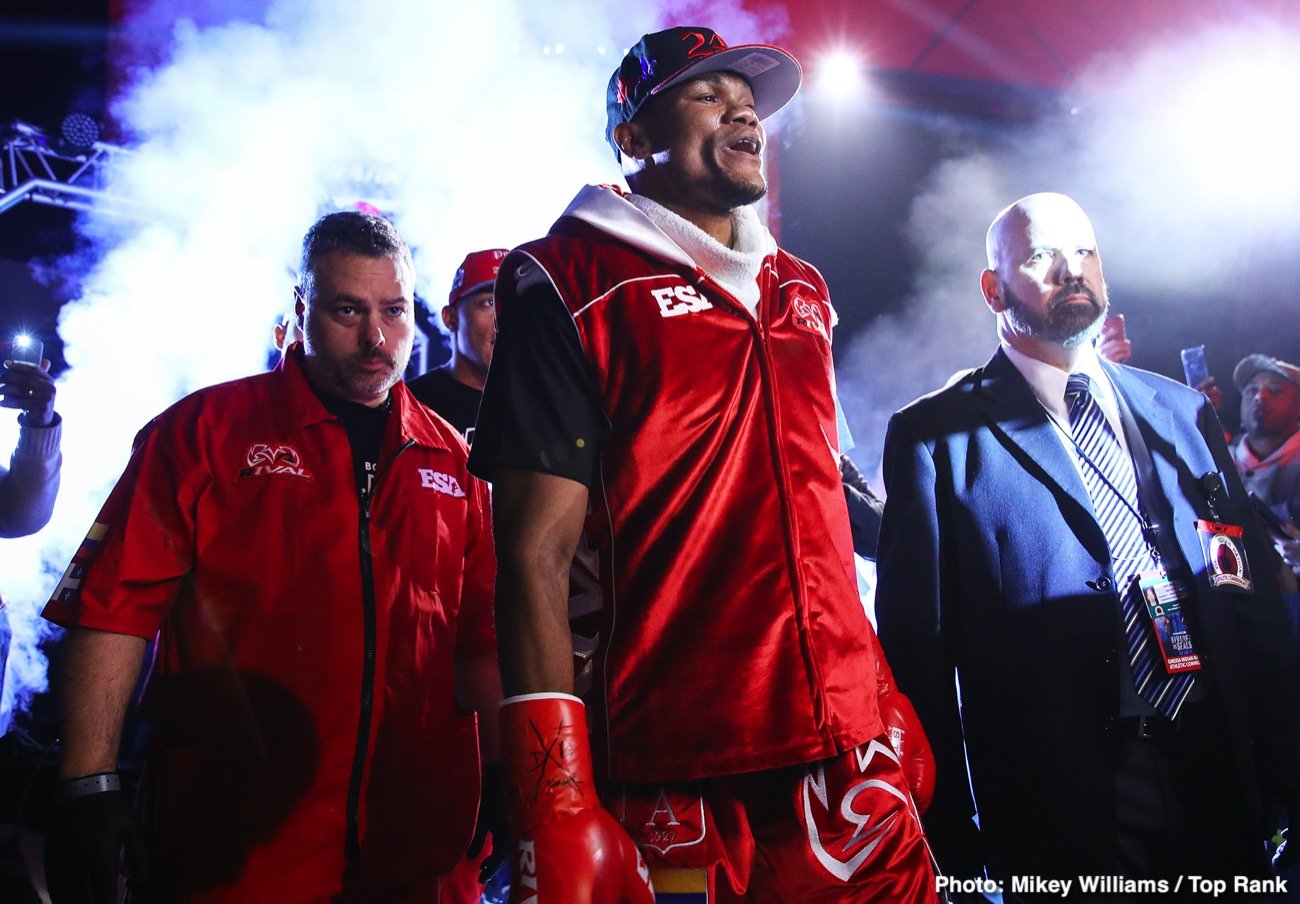 By Chris Williams: Eleider ‘Storm’ Alvarez will be facing KO artist Joe Smith Jr in late August in the third week in light heavyweight action, according to ESPN. The date will be between August 20 and August 22. We should find out soon a firm date on the fight.

Alvarez-Smith was previously scheduled for this month on July 16 in Las Vegas, Nevada. Still, it needed to be postponed after former WBO 175-pound champion Alvarez (25-1, 13 KOs) suffered a right shoulder injury training.

Unless Eleider has a setback with his shoulder, he should be ready to go next month to face Smith Jr. It’s unclear whether this will be a 10 or 12 round bout, though, but there’s a good chance that it won’t go the full distance. With the way these two guys punch, Smith-Alvarez will likely end in a knockout. 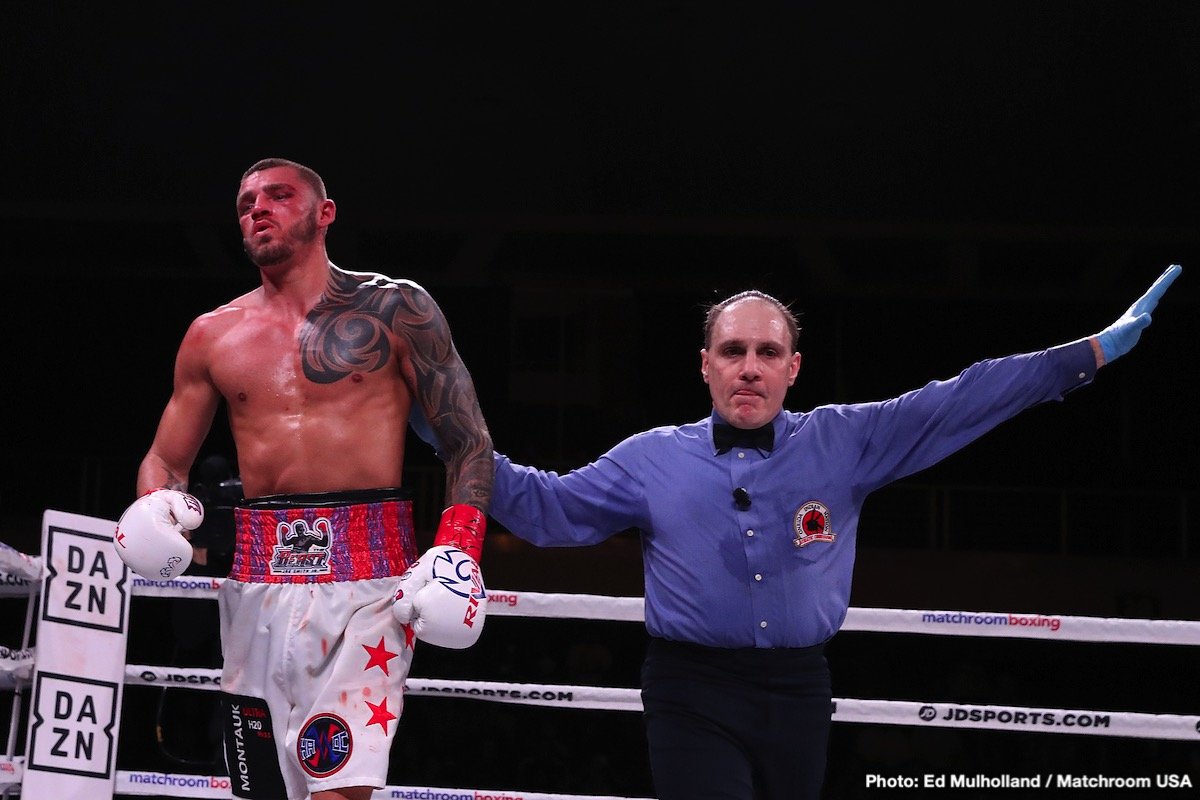 Shoulder problems are kind of tricky, and it’s hard to believe that Alvarez’s injured shoulder is 100% healthy after just a couple of months. The bad news for Alvarez is if it’s not at full capacity, he’s going to get chopped to pieces by the heavy-handed Smith Jr. The Long Island, New York native Smith Jr isn’t the type of fighter that Alvarez needs to be taking on if he’s not entirely healthy.

Alvarez, 36, is one of the lucky ones who got a fight in earlier this year before the pandemic hit. He defeated Michael Seals by a seventh-round knockout on January 18.

“I sent a medical report on Alvarez’s situation early last week confirming that the inflammation is gone after treatment, the pain is minimum,” said Alvarez’s promoter Yvon Michel to ESPN.com.

“He’s going to start sparring next week, everything is under control. He’s fit and ready to fight by mid-August.”

The one that you’ve got to feel sorry for here is Joe Smith Jr and his promoter Joe DeGuardia. They have to wait another month for the fight with Eleider, and they’re not even sure that he won’t have some kind of flair up with his shoulder.

Will Eleider’s injured shoulder hold together?

When you get an aging fighter like the 36-year-old Alvarez, these start breaking down with aches and pains, and the postponements can start happening left and right.

It would be interesting to know if Smith Jr and DeGuardia can walk away from the contract if Alvarez’s shoulder problem persists for the remainder of 2020. You can’t have Joe Smith Jr devote one to two years of his career, waiting for a magical time where the stars are line and Alvarez is finally feeling healthy enough to fight.

At some point, you’ve got to wash your hands of the situation and walk away. If the ailing Alvarez is still dealing with his shoulder problem month after month, it’s best to move on. It would be disappointing if Smith Jr is still waiting for Alvarez to get healthy enough to fight in 2021.

Alvarez lost his WBO light heavyweight title to Sergey Kovalev by a 12 round unanimous decision last year in February 2019. In their previous fight in August 2018, Alvarez pulled off a big upset in stopping Kovalev in the seventh round. That was a real shocker, but Kovalev had already been beaten twice by Andre Ward, and he was showing signs of decline.

Smith with a good chance of winning

The 11-year professional Eleider has wins over Lucien Bute, Jean Pascal, Edison Miranda, and Isaac Chilemba. Besides his win over Kovalev, those are the best wins of Alvarez’s career. For some reason, he hasn’t fought the talented guys Artur Beterbiev or Dmitry Bivol. Those two are viewed as the best fighters at 175 by a long shot.

In 2016, Smith retired Bernard Hopkins in knocking him out in the 8th round. That was a fight in which Hopkins fell out of the ring while Smith was pounding him with shots against the ropes.

Hopkins somehow slipped out of the ring and wound up with a shoulder injury. Also, in that year, Smith defeated Andrzej Fonfara by a first-round knockout.

Smith has a good chance of beating Alvarez in August, even if he’s 100% healthy. Alvarez has a chin problem, and he tends to struggle against punchers. If Alvarez is forced to take more seven or eight rounds of punishment from Smith, he’ll fold like a deck of cards.