Devin Haney ready to return to the ring 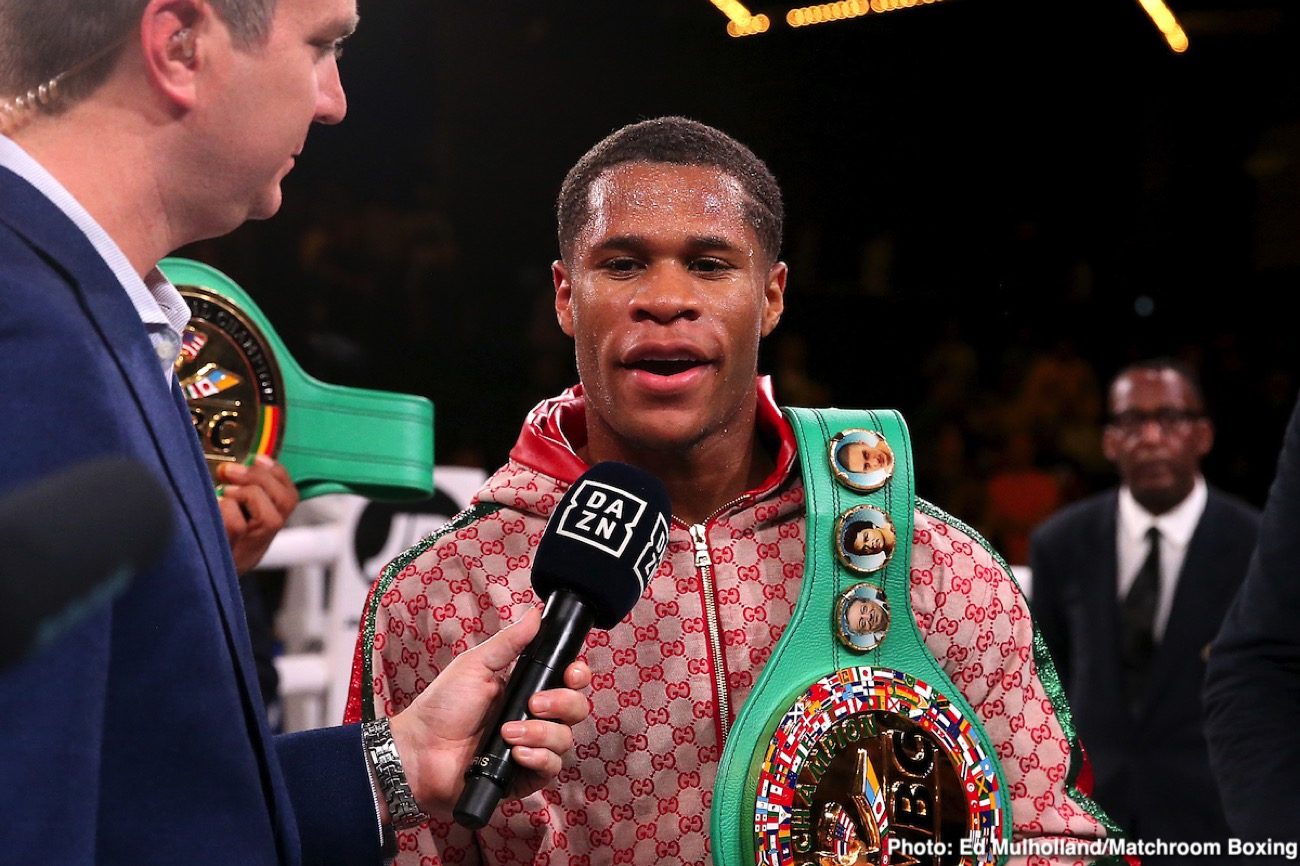 “I’m anxious to get back in the ring. I want all the smoke” – Undefeated WBC Lightweight Champion, Devin “The Dream” Haney (24-0, 15 KOs), sounds off, putting the big names surrounding his weight class on notice as he awaits the announcement of this next fight.

“In addition, Haney gives his thoughts on his next fight during the COVID-19 pandemic as well as the mental and physical benefits of being quarantined.

I’m excited to get back in the ring,” said Devin Haney. “This has been the longest time between fights in my career. My body received a well-deserved rest. I’m blessed.”

“Lately, I’ve been fortunate to spend a lot of time with “TBE” Floyd Mayweather. Being compared to Mayweather is the ultimate compliment for any fighter in this era of boxing. I’m the most skilled fighter in the world right now and I’m looking forward to an opponent I can make a statement against.

“I’m working diligently with Mauricio Sulaiman and the WBC to make the big fights happen. Every decision made by the WBC hasn’t gone my way, but I have a genuine love and respect for the WBC family as a whole. I’m proud to represent the WBC organization.”

“Let’s make this clear, you can’t win the franchise title and you can’t challenge a franchise champion. I’m 21-years old and I’m the WBC world lightweight champion and I believe in fighting mandatory challengers. The 135 lbs unification runs thru me. Enough said!”

“At this point in my career, I don’t mind mandatories at all because it forces the best fighters in my division to get in the ring with me. They can run but they can’t hide. Mandatory for me means mandatory cash. It’s good to be in a stacked division.

“If I can I’m going to fight all of them. I hope Teofimo Lopez beats Loma and then fights me in a unification for all the belts like he promised Mauricio Sulaiman. To me, it looks like Luke Campbell is looking forward to the opportunity of getting beat up by me more than Ryan Garcia is looking forward to it.

“I’m guessing in Ryan’s defense, he’s never lost so he’s moving a little different and trying to stay undefeated (lol), but I don’t think Eddie Reynosa and Golden Boy really don’t want him to fight me yet. Luke is accustomed to losing big fights, we know he’s come up short more than once.

“I think he has more of a… “I don’t give a damn attitude” and I’m cool with that too! As far as Gervonta “Tank” Davis? I don’t like throwing water on a drowning man but leaving a stacked 135 lbs. division, to take a fight at super featherweight kind of tells you where he’s at.

“It’s no secret I’m a problem at 135 lbs. I know Jose Ramirez ain’t sleeping good at night either, he got Haney at 140 lbs. or Terence Crawford at 147 lbs. problems to think about. I don’t wish that on anybody. Josh Taylor is an easier fight for Ramirez then me or Bud, but it’s still a tough 50/50 fight. Ramirez is out here looking like food on the low.”

“This pandemic is something we’ve never seen,” Haney concluded. “It’s tough on everyone around the world. We’ve all been in quarantine for the last few months, including myself, and fortunately staying at home is the best place to be.

“Similar in many ways to training camp. I pray to GOD things get back to normal soon. I’m anxious to get back in the ring as soon as the experts give the green light. I want all the smoke.”