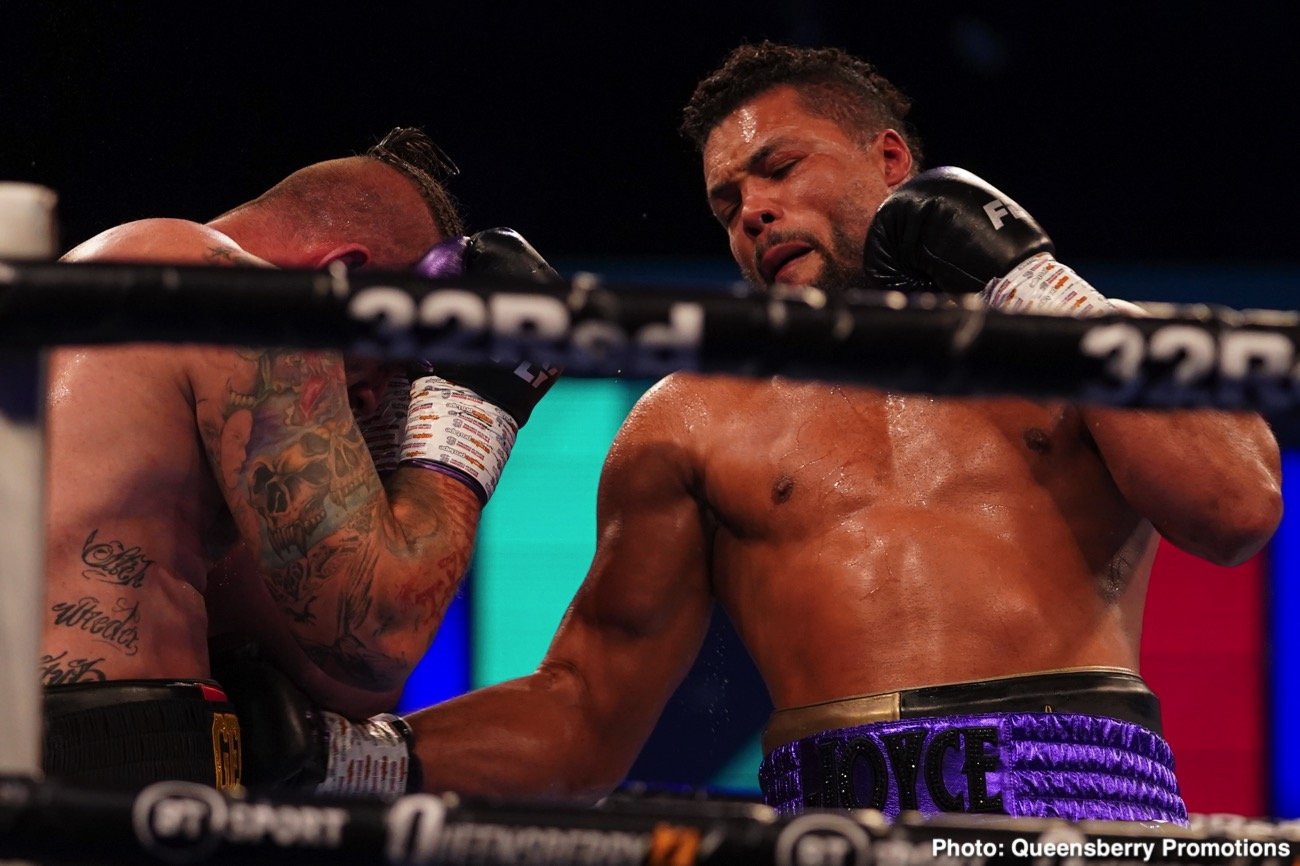 By Matt Lieberman:  Daniel Dubois was given a warning by Joe Joyce (11-0, 10 KOs) on Saturday after his impressive third-round KO win over Michael Wallisch (20-4, 13 KOs). Tonight’s ‘Juggernaut’ Joyce vs. Wallisch took place without fans at the BT Sport Studio, Stratford.

Joyce let the unbeaten Dubois (14-0, 13 KOs) know that “I’m coming for you” now. Dubois didn’t look unnerved by the warning from Joyce, which isn’t all that surprising because he’s the favorite to win. 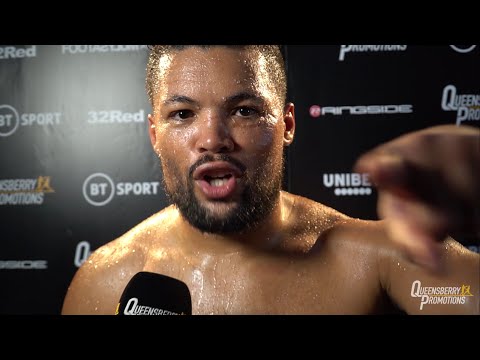 Although Wallisch put in a game effort, he was dropped three times in the contest before it was waved off by referee Ian-John Lewis. As always, Joyce made it entertaining with his relentless pressure and seemingly nonstop punches.

The power was real for Joyce, as he looked like a young George Foreman with the way he bludgeoned the German fighter Wallisch with sledgehammer blows.

Dubois needs to win his fight against Erik Pfeifer

Joyce and Dubois will fight on October 24 at the O2 Arena in London, as long as the 22-year-old Daniel does his part by winning his next fight. Dubois is scheduled to face Erik Pfeifer (7-0, 5 KOs) on August 29 at the BT Sport Studio, Stratford.

Like tonight’s fight between Joyce and Wallisch, 34, Dubois vs. Pfeifer will be without boxing fans. For these low-level fights, it doesn’t matter a whole lot that they’re taking place behind closed doors.

It’ll be a different story for when Joyce and Dubois, 22, battle it out on October 24 at the O2 Arena.

That fight will have a small crowd in attendance. The 2016 Olympic silver medalist Joyce says he’d rather wait until 2021 to face Dubois rather than face him without fans.

It shouldn’t be a difficulty for Dubois to get through his next fight without struggle. Joyce is familiar with Pfeifer, and he thinks it could be a tough fight for Dubious. Whether Joyce means it or not is difficult to know, but he’s rooting for Dubois to win.

It doesn’t serve Joyce’s purpose if Dubois loses to Pfeifer because he’ll lose out on that big payday.

Dubois: “The guy looked like he was ready to quit after the first round, but you dismantled him pretty good.”

Joyce: “I’m coming for you from a full training camp. I’ll be ready. I’ll be watching your fight very closely and I’m coming.” 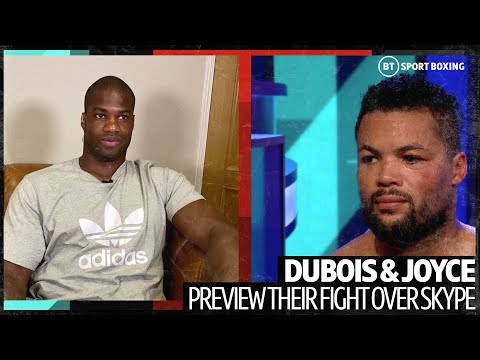 It’s asking a little too much of Dubois for him to trash talk Joyce, which is what their promotion is going to need for it to do well. Dubois just doesn’t have it in him to go after his opponents verbally the way other fighters do outside of the ring.

Someone from Dubois’ team needs to be the one that fires back at Joyce when he starts trash talking. Dubois doesn’t look capable of doing that.

Joyce also made this odd comment about his fight against Wallisch:

The way that Joyce said that it suggests that he’s already having issues with his self-confidence. Joyce is the older guy at 35, and he’s going to be giving away a lot of years to the 22-year-old Dubois.

Joyce might be realizing now that he’s not the same fighter he was four years ago when he competed in the 2016 Olympics. Joe was a little faster back then, and a lot lighter at 230 pounds. 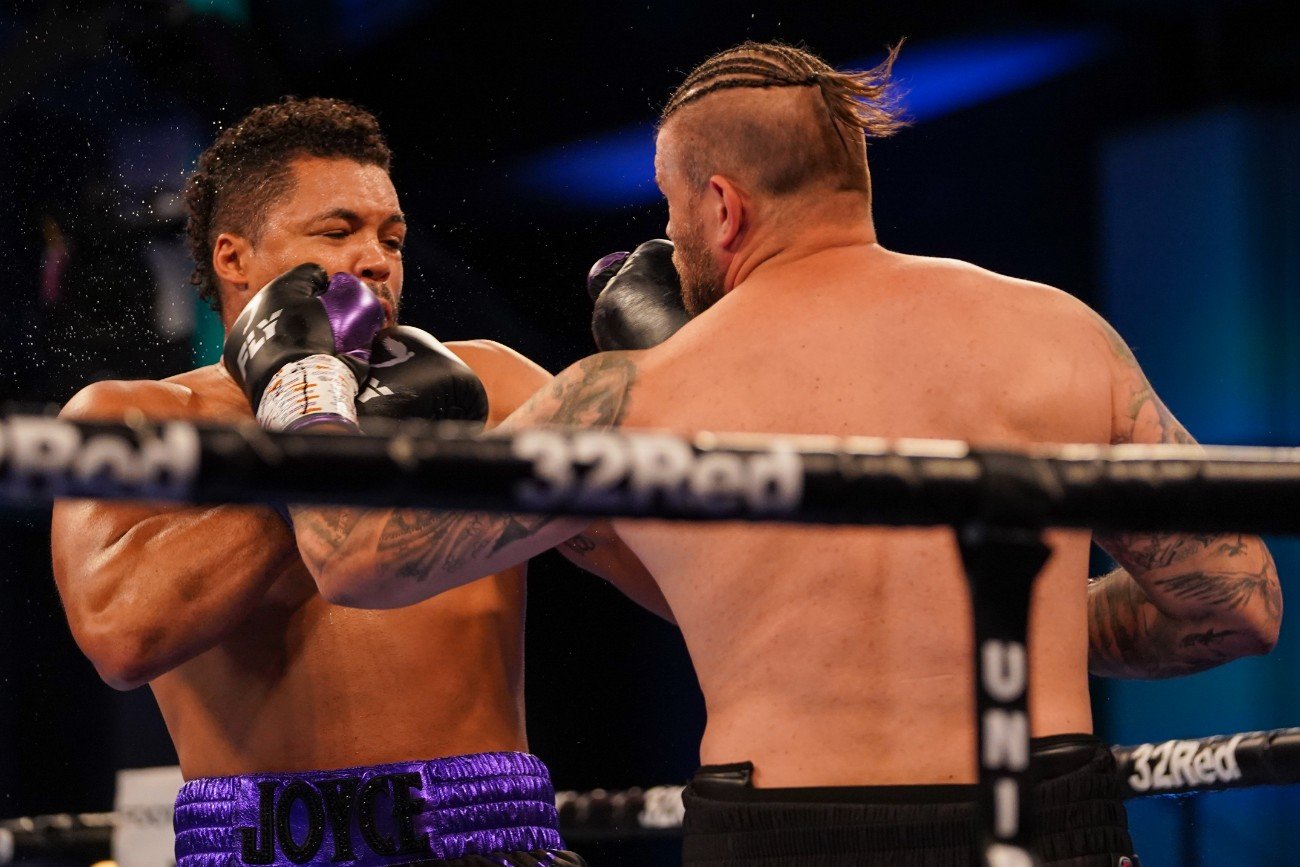 Joyce has packed on 40 pounds since he turned pro in 2017, and that weight is slowing him down dramatically. For this fight against Wallisch, Joyce weighed in at 270 pounds, and he looked sluggish and slow tonight.

To promote the Dubois vs. Joyce fight correctly, there needs to be someone from both teams that can do the talking for them. Neither of them can rise to the level they need to be at for them to get boxing fans excited about their October 24 fight.