By Chris Williams: Kell Brook says WBO welterweight champion Terence Crawford is “ready” to face him, but they just need to make sure the numbers make sense. The teams for the two fighters were planning on beginning negotiations before the pandemic struck.

There’s still interest in making the Crawford vs. Brook match take place, but it’ll need to wait after the green light is given for the sport to resume. Brook (39-2, 27 KOs) should be a good barometer on how well the 32-year-old Crawford will handle the younger, stronger, and bigger 30-year-old IBF/WBC welterweight champion Errol Spence Jr. (26-0, 21 KOs) in the future.

Brook would be a nice step up for Crawford

Top Rank, the promoters for Crawford, has kept his training wheels on since they started promoting him, and they have yet to match him against his first high-level opponent.

Brook, 34, is a little past it at his age, but he’s still considerably better than the opposition that Crawford has been facing since he turned professional in 2008. That’s why it’s impossible to know how well Crawford will go against Brook.

Sure, Crawford looks great changing stances repeatedly against lower-level opposition like Amir Khan, Egidijus Kavaliauskas, Jose Benavidez, and Jeff Horn, but that might not work against Brook.

“I saw Terence Crawford, he said he was ready for it, so everybody is on the same page,” said Brook to Sky Sports. “Everyone wants to make the fight. We just need to make the numbers count for me, for it to make business sense, and then we can get training and get ready for the fight.” 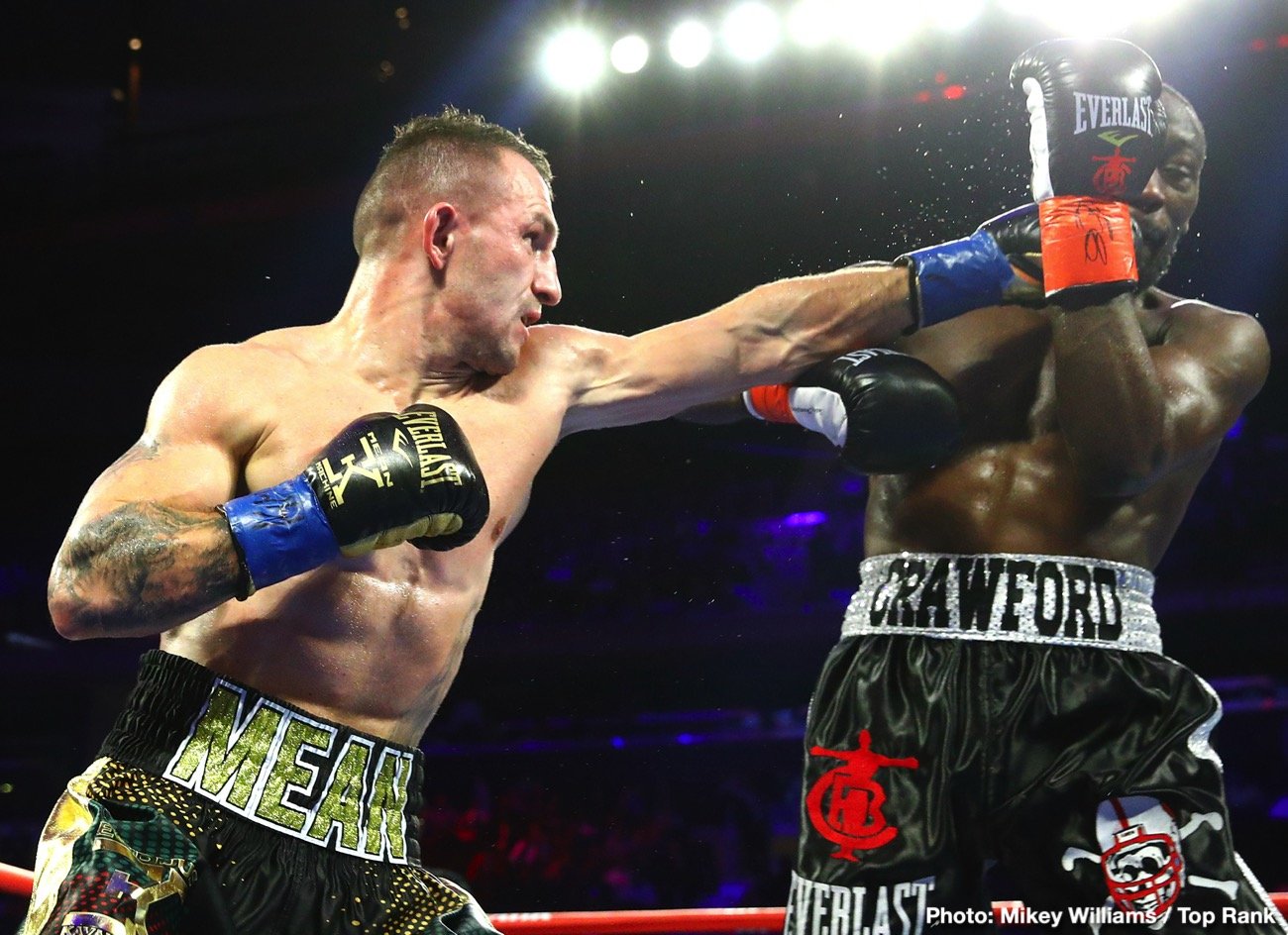 Crawford has a lot of catching up to do

Hopefully, the Brook vs. Crawford fight can get made after the lockdown, because it would be a shame if Top Rank trots another overmatched unknown opponent for Crawford to fight. He’s nearing his mid-30s, and all the great comparisons that his promoter Bob Arum makes about him in comprising him to Sugar Ray Leonard seems ridiculous.

By the time that Sugar Ray was the same age as Crawford, he’d already fought these fighters:

If Arum wants to compare Crawford with Leonard, he’s going to need to put him in with good opposition almost immediately. By the time Sugar Ray was the same age as Crawford at 32, he’d already been involved in six huge mega-fights. In contrast, Crawford hasn’t been involved even one big mega-fight, and that’s disappointing.

It’s pointless for Arum to compare Crawford with Leonard because the opposition isn’t there for Terence for him to be compared. All we know is Crawford does well against fighters like Khan, Horn, Dierry Jean, and Julius Indongo. Those guys don’t compare to the level of opposition that Leonard was fighting during his career.

Crawford has boxing skills, but the match-making that’s been done for him by Top Rank has been horrendously bad. After 12 years as a pro, the only name on Crawford’s resume is Yuriorkis Gamboa, who he fought in 2014.

Gamboa was fighting two divisions above his best weight class of featherweight. That would be like Crawford moving up to middleweight and taking on someone like Gennadiy Golovkin or Jermall Charlo. Would Crawford do well against those fighters? Maybe for a few rounds, but once GGG and Charlo start putting hands on Crawford, they would likely start breaking him down.

Duboef wants to match Crawford against Spence and Pacquiao

He’s doing terrific and we look forward to getting him back in the ring as soon as possible.”

Duboef needs to think hard on whether it’s a good idea for him to match Crawford against Brook. If Crawford loses this fight, then he can forget about ever getting a fight against Pacquiao and Spence. Those guys aren’t going to want to waste their time in fighting Crawford if Brook takes his scalp.

Brook will at least show where Crawford is at. For the first time, fans will get a clear glimpse of Crawford’s true talent.

Kenny Porter wants Crawford, Pacquiao or Spence next for Shawn »