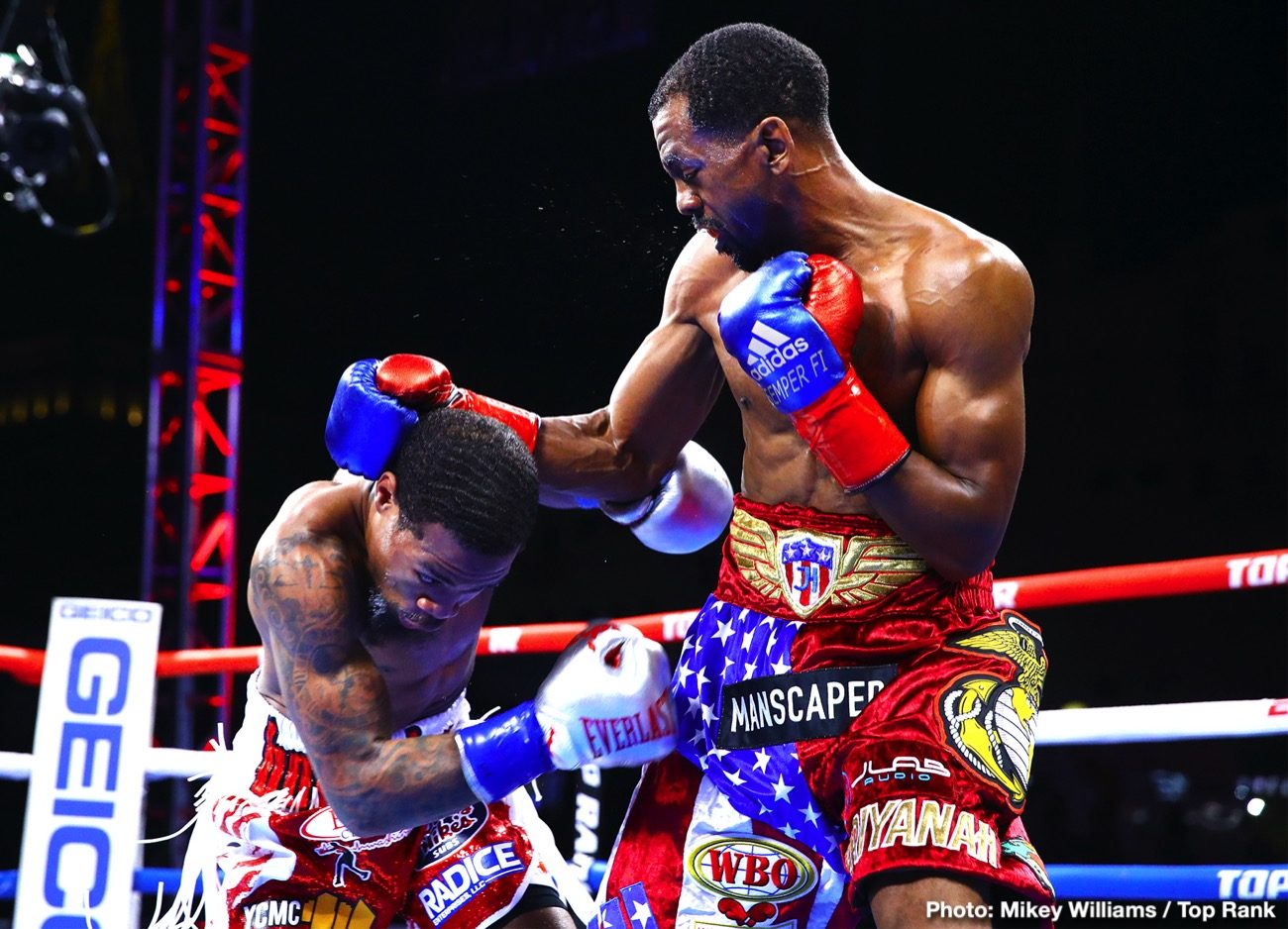 By Jeff Aronow: WBO super featherweight champion Jamel Herring and Jonathan Oquendo have agreed to terms for July 2 live on ESPN at the MGM Grand in Las Vegas, Nevada. @MikeCoppinger is reporting that Herring (21-2, 10 KOs) will be defending against #11 WBO Oquendo (31-6, 19 KOs) next.

Herring will be making his second defense of his World Boxing Organization super featherweight strap that he won in May of 2019 in beating the champion Masayuki Ito (26-2-1, 14 KOs) by a 12 round unanimous decision.

In Herring’s first defense, he defeated Lamont Roach Jr. by a 12 round unanimous decision last November.

This isn’t the greatest fight that can be made at 130, but given the circumstances with the pandemic, it’s perhaps the best that Herring’s promoters at Top Rank could do right now. Getting the talented 130-pound fighters into the U.S to face the 34-year-old Herring isn’t possible right now.

You’d like to think that Top Rank would be matching Herring up against a better opponent than Oquendo if the pandemic wasn’t going on, but that probably wouldn’t be the case.

They’re grooming Herring to have him defend against Oscar Valdez or Shakur Stevenson. One or both of those fighters could be facing Herring in the future. 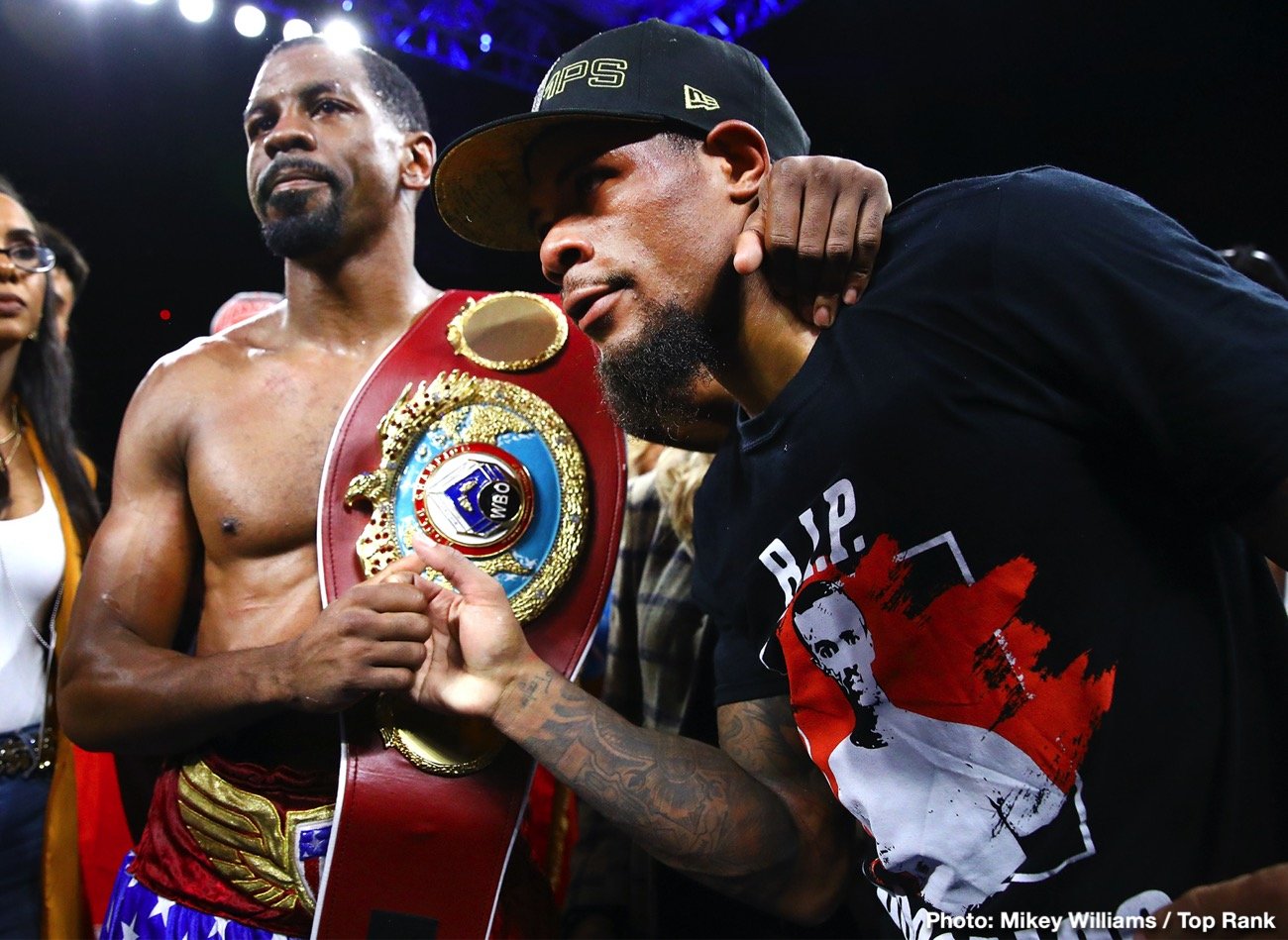 Herring in a winnable fight

Moreover, Top Rank doesn’t want Herring to get beaten, so it makes sense for them to match him against the aging 36-year-old Oquendo right now until they eventually match him up against someone good like Shakur Stevenson or #1 WBO Oscar Valdez.

Oquendo is someone that Herring has the boxing talent to beat. It won’t be easy, but Herring can do it as long as he doesn’t get caught.

The fact that Oquendo recently lost to Herring’s last victim Lamont Roach Jr. tells you all you need to know about his qualifications for this fight. Herring would be better off giving Roach Jr. a rematch, but that’s not going to happen.

ESPN probably wouldn’t be in favor of seeing Roach Jr. trotted back out as Herring’s next opponent after losing to him by a 12 round unanimous decision last November.

It’s safe to say that Herring would be crushed by those two fighters, but fortunately for him, he doesn’t need to worry about fighting them yet.

Had a great time speaking with the @espn crew! They asked me who would I want to fight if I couldn’t get Frampton… @abnermares what’s up bro! 🙌🏾@ESPNRingside pic.twitter.com/AStsdsNiix

Top Rank had previously planned on bringing Herring back on June 13 against former two-division world champion Carl ‘The Jackal’ Frampton (27-2, 15 KOs) in Belfast, Northern Ireland, but the pandemic wiped that match out.

Frampton is a decent fighter, but he’s not at the level of the talented 130-pound fighters like Oscar Valdez, Stevenson, Miguel Berchelt, Leo Santa Cruz, and Chris Colbert.

Jamel to fight stateside for now

The current situation will keep Herring in the U.S defending his WBO belt rather than traveling to places like Belfast to face Frampton.

Herring’s two career defeats have come against Denis Shafikov [TKO 10] and Ladarius Miller [UD 10]. Unfortunately, Herring didn’t avenge either loss, and it’s unclear whether he could even if he tried. Herring’s best wins have come against these fighters:

Most would agree that Herring’s resume is on the thin side with very few quality wins. Herring is a good fighter, but he’s not shown the kind of ability that suggests that he would be able to hang with the best at 130.

Joshua vs. Pulev possible for smaller venue in UK »