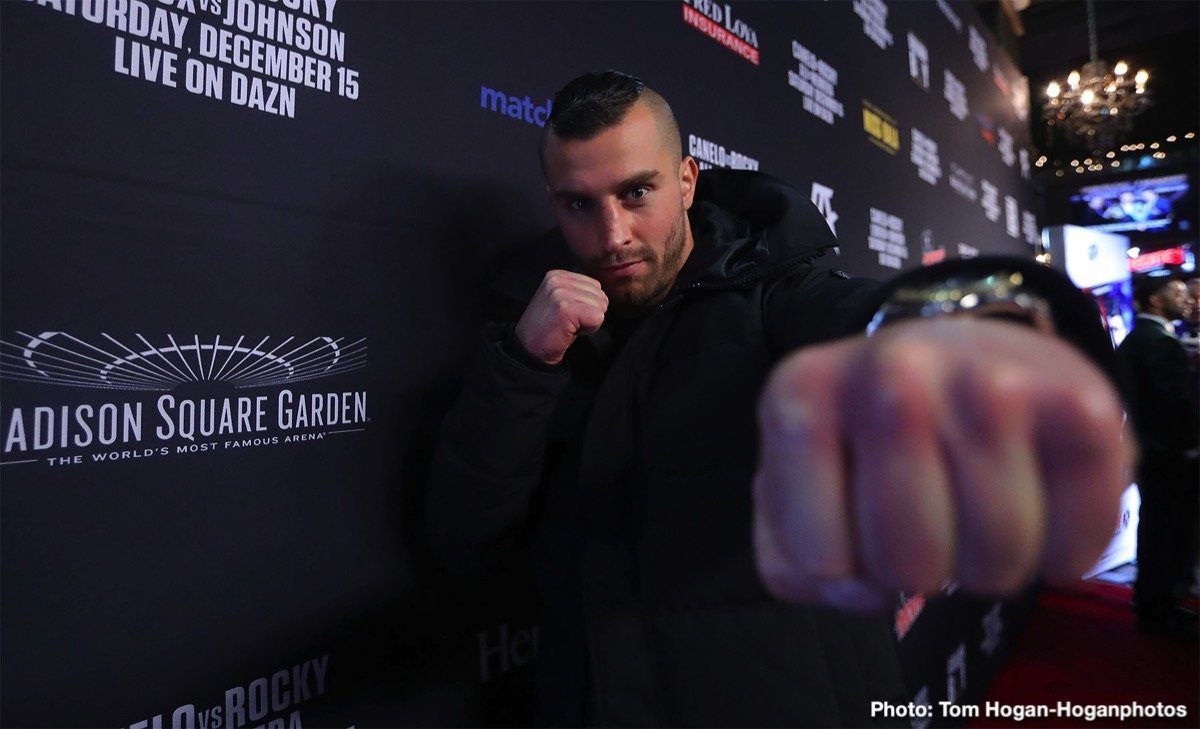 By Dan Ambrose: David Lemieux was hoping to get a good win in 2020, and then use the victory to get a big fight against Canelo Alvarez at 168. Instead, the former IBF middleweight champion Lemieux (41-4, 34 KOs), is inactive due to the pandemic.

Lemieux would have gotten a fight against Canelo years ago, but embarrassing losses to Gennadiy Golovkin and Billy Joe Saunders ruined those plans.

Like everyone else, Lemieux has no idea when boxing will start back up, but he’s making sure that he’ll be ready when that time comes. Lemieux is training hard, staying in shape and looking to get a good win under his belt this year.

Lemieux, 31, didn’t look impressive in making his super middleweight debut last December against Maksym Bursak. He struggled to defeat the 35-year-old Bursak (36-6-2, 16 KOs). Bursak, who isn’t a big puncher, but he was still able to drop Lemieux twice with his high volume punching.

Lemieux later blamed his poor performance on his ring rust, considering that he’d been out of the ring for 15 months going into the fight.

“As soon as the light is green, I’ll be ready,” said Lemieux to AB Boxing News. “I’m staying ready. I feel good at 168. The super middleweight division is a good one for me. The weight cut wasn’t that hard. When I go down to 160, it’s tough.

“I wanted to be active this year, but unfortunately, the pandemic came across. You can prepare all you want, but there’s no time like fight-time. You can do as much sparring as you want, but when you’re in the boxing ring, you’ve got to be active as a fighter.

“That’s the plan this year in 2020. We want to be active, and as soon as the green light is on, we’re going to be ready to go,” said Lemieux.

In looking at Lemieux’s last fight against Bursak, his punching power isn’t the same in this weight class as it was at 160. Lemieux isn’t as devastating a puncher as he was at 160. Bursak took Lemieux’s shots well, and they didn’t possess the same impact as when he fought at middleweight

.At 5’9″, Lemieux is short for the 168-pound division, and he’s going to have problems against the bigger guys like David Benavidez. 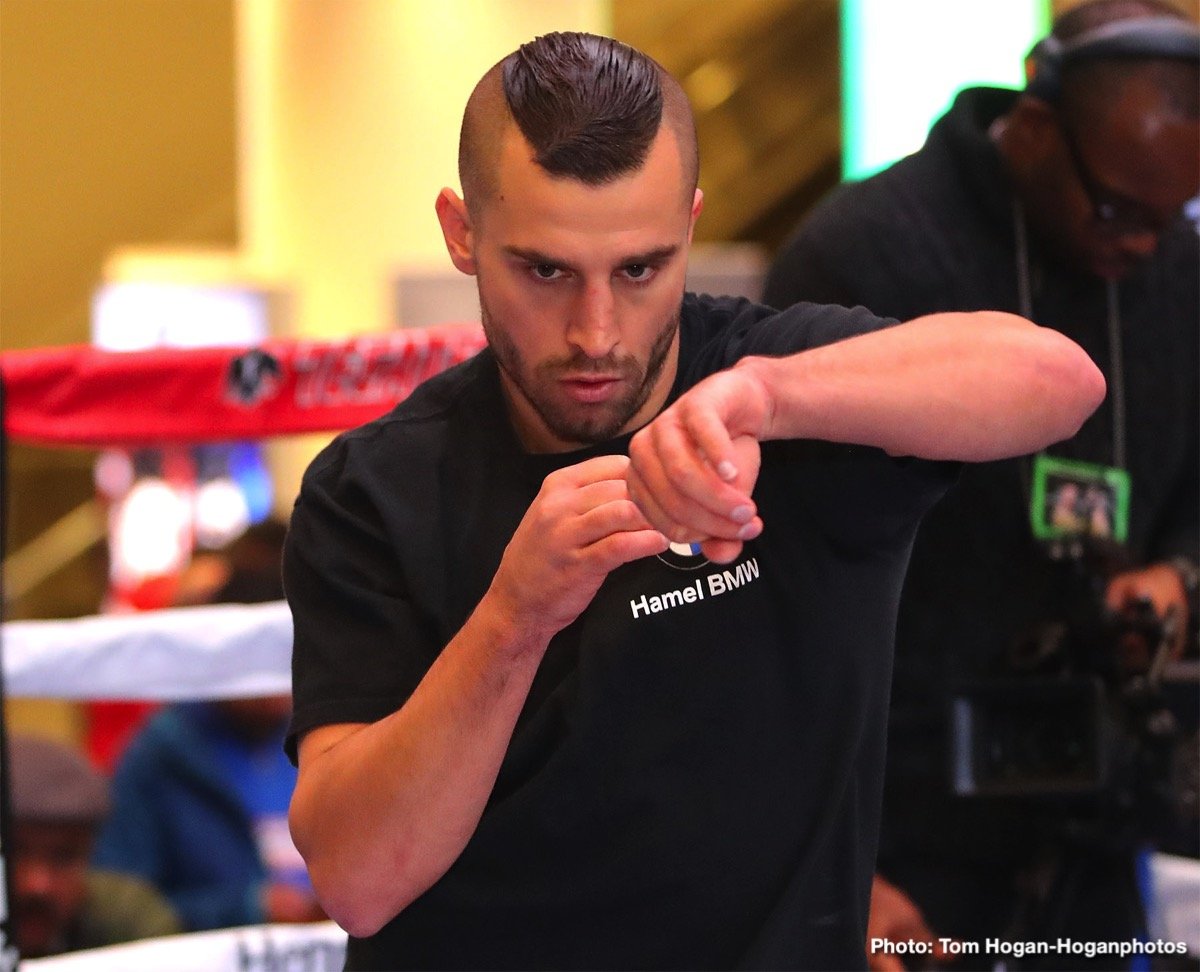 168 is the hot division now

“Everybody from 160 is moving to 168, and it’s becoming the hot division,” said Lemieux. “You got Jacobs, and you got all the big boys, and it’s a very active class. There’s a lot of guys to test out and get some victories on. It’s a very tough division and a solid division.

“I can’t wait to get put in the mix. I want to fight another fight before I get in the big leagues. It’s the biggest fight in boxing, and I’ve been chasing it for years,” said Lemieux about him wanting a fight against Canelo Alvarez. “Styles make fights, and with Canelo and me, it’s bombs away.

“The fans are going to get a great treat. Canelo is a great fighter, and I’ve got to be well prepared for a fighter like that. Before seeing Callum Smith against Ryder, I was going to put Callum number one. But I would put [David] Benavidez #1. I think Callum Smith and Benavidez are the ones that are tough to beat,” said Lemieux.

The good fighters from the 160-pound division are moving up to 168 as they get older, and now it’s red-hot. That’s good at bad for Lemieux because he has a lot of options for him to fight. But it’s also a potential negative for Lemieux because he doesn’t match-up against guys like Jermall Charlo, Gennadiy Golovkin, Canelo, or David Benavidez.

“It’s an interesting fight,” said Lemieux on a fight between Benavidez and Caleb Plant. “If I had to choose I’d have to choose, Benavidez would have to get the win.

“For Charlo to take on Benavidez, that’s a very tough fight for Charlo. My biggest victory was against Hassan Ndam when I won the IBF middleweight championship of the world. I was really well prepared for that fight. I want to get all those titles back,” said Lemieux.

WBC super middleweight champion David Benavidez could already be the best fighter in the division. We know for sure until he faces guys like Canelo, Lemieux, Caleb Plant, Callum Smith, and Billy Joe Saunders. The way that the 23-year-old Benavidez is performing right now, he’s going to be hard to beat.

Jermall Charlo is moving up to super middleweight, and it’s going to be interesting to see ho he does against Benavidez. 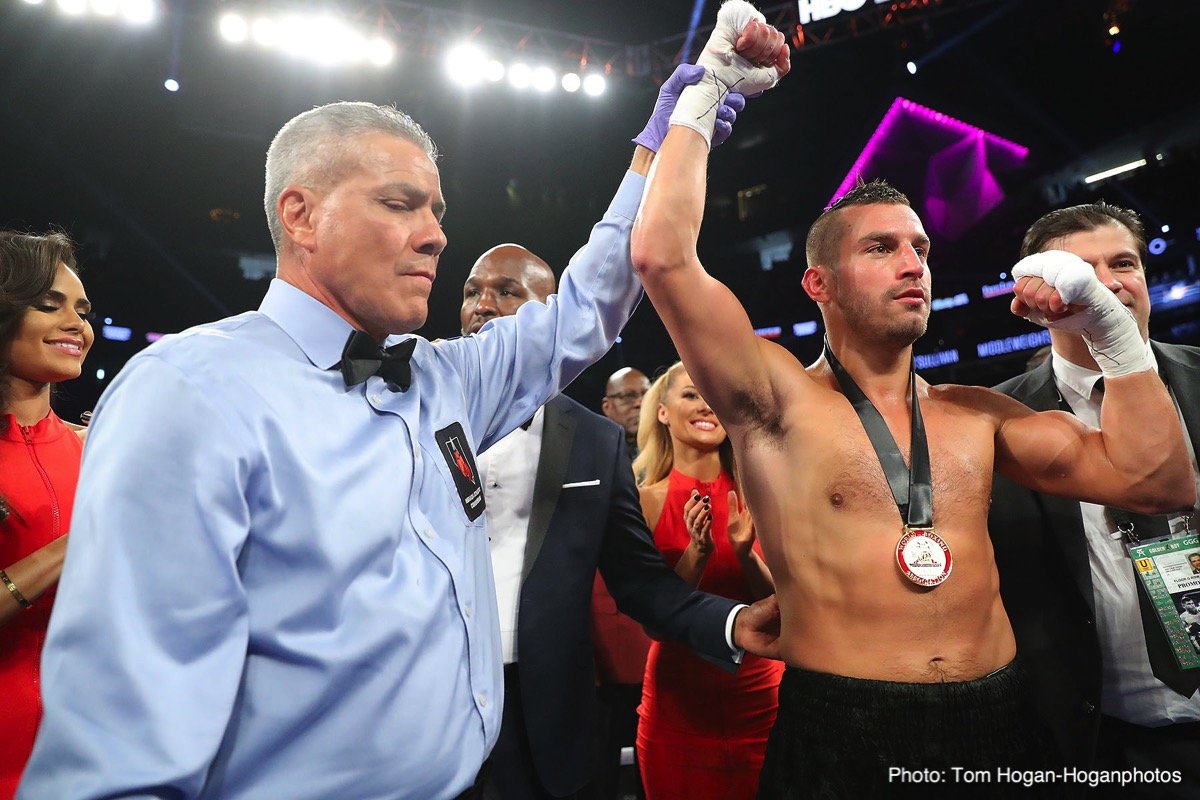 Canelo has nothing to prove against Golovkin

“Whenever this pandemic is over, I can’t wait to see what’s next,” said Lemieux. “Canelo beat Golovkin, and there’s nothing more to prove. Canelo is on his way up and is still improving.

“Unfortunately, Golovkin has hit his peak, and he’s not improving as much as he was back when I fought him. I think he’s on his way down. In the trilogy, I’m 100% sure that Canelo is going to take that. It’s always interesting to see Golovkin go in the ring, and Canelo and him are two great fighters in the ring.

“He always gives the fans great fights. I was expecting Golovkin to come in there and start exchanging shots with me and try and blow me out of the building. I could pick him off. And I was expecting more from Golovkin.

“He has a great jab and a great boxing technique. He wasn’t letting me get inside, and he was keeping me out and boxing smart.  I think he knows his way around the ring. But power-wise, I was expecting more than that,” said Lemieux.

Well, boxing fans disagree with Lemieux about his opinion that Canelo has nothing to prove in facing GGG again. A lot of boxing fans think Golovkin won the first fight against Canelo and deserve a draw in the second fight. To those fans, Canelo has A LOT to prove.

Lemieux confident Canelo faces him at 168

“Canelo, I think he’ll fight me at 168,” said Lemieux. “The plan was to get a good win this year, and then the Canelo fight would be in perspective. I’m a small super middleweight, so I’m not going to go up to 175.

“I want to make a mark on the 168-pound division, and see what I got in there. For sure, it sucks,” said Lemieux about fighting without fans. “Boxing has always been a sport where the fans love the fighters. It’s going to be a whole different world when there’s not going to be any fans in the stands.

“We’re going to adapt and do what we’ve got to do to keep this show going. The fans will get the fights from their TVs, PCs, or whatever, but I got to fight. Fans or no fans, for sure, I’d rather the fans be in the stands than fighting on closed-circuit.

“No matter the situation, I’ve got to fight. Some fighters are good in the gym, but when it comes to fighting in the ring, they choke. That’s what separates the real from not so real. There are guys in the gym that give great sparring, but in the fight, they’re not the same guy.

“The true colors come out in every fighter when they’re in front of a big crowd when it really counts. That’s when we see their real colors. When you’re in the gym, and you have your coach and your protective gear, it’s a different feeling when you’re out in the ring,” said Lemieux.

It’s likely Canelo won’t play his old catchweight tricks against Lemieux. It looked ridiculous when Canelo used a catchweight in his fight against Julio Cesar Chavez Jr. in 2017.