By Dan Ambrose: Mikey Garcia doesn’t see any reason on the surface for Andy Ruiz Jr. to have switched trainers from Manny Robles to Eddy Reynoso following his loss to Anthony Joshua last December.

Mikey notes that Ruiz Jr. (33-2, 22 KOs) admitted himself after his lopsided 12 round unanimous decision loss to Joshua (23-1, 21 KOs) that he hadn’t trained hard as he should have. He cut corners with Robles in preparing for his rematch with Joshua in Saudi Arabia.

Not much will change with Reynoso as Ruiz’s trainer

If Ruiz is hoping that Reynoso will be able to work his magic on him the way he did with Canelo Alvarez, he could be mistaken. Reynoso doesn’t have the golden touch to turn every fighter he trains into another Canelo. That’s a fighter that would do well with any trainer.

Ruiz Jr. may have things twisted in his head if he believes Reynoso is the magic person that can turn him into a world champion again because he’s not a miracle worker. Reynoso is more of a blue-collar type of coach, who can do well when he’s got talented fighters that come to him.

So for Ruiz to suddenly switch trainers after his loss, it gives many boxing fans the impression that Robles was the one at fault instead of the other way around. Former IBF/WBA/WBO heavyweight champion Ruiz hasn’t elaborated what went through his head to make him want to part ways with Robles.

Right now, fans are still confused about why Ruiz felt the need to swap out Robles for Reynoso. Mikey suspects that Ruiz, 31, may feel the need of having someone more strict as his trainer to get him to put in more effort in camp. Ruiz’s weight for the rematch with Joshua was too high at 283 pounds, and that could have played a part in him losing.

Ruiz changing trainers after his loss

“I think Andy can switch trainers if he wants to switch trainers. Maybe he feels he can learn and improve with a different trainer. In this case, Eddy Reynoso,” said Mikey Garcia to Fighthype on Andy Ruiz. “He’s free to do whatever he wants.

“I think it’s unfair for anybody to blame Manny Robles, and I don’t think anybody is blaming him or maybe Andy might have said something. I don’t know. But it’s unfair for you to feel like you need a new trainer because you had a loss, and now you got to switch trainers.

“Sometimes you lose not because of your trainer, but because you yourself didn’t do enough. Maybe you didn’t take it seriously, maybe you didn’t train well enough, which seems to be the case. He himself admitted that he didn’t take training camp seriously. So I don’t know if there’s a need for him to switch trainers,” said Mikey.

The weird thing about Ruiz making a trainer change is the fact that he admitted that he hadn’t worked hard in camp. As a result, it looks strange for Ruiz to dump Robles after his confession. If anything, Ruiz should have stuck with Robles and proved that he could put in the effort under his guidance.

For Eddy Reynoso, this isn’t the ideal way for him to get a new fighter to his camp. Ruiz is coming into the camp with Reynoso not only with a loss but the reputation for having slacked off while training for the Joshua rematch. That’s got to take away a lot of the shine for Reynoso to have Ruiz in his camp now. It’s like he’s inheriting a problem, and that can’t be a good feeling.

“Maybe it’s something he wants to do, and he wants to improve,” said Mikey in trying to figure out what Andy’s reasonings were for him to change trainers. “I’m not saying he’s blaming Manny, but it’s unfair for people to start saying that. ‘Oh, now he’s switching trainers.’ That’s unfair.

“Manny may not have been at fault here. If a fighter doesn’t want to come to camp or doesn’t train properly or whatever, it’s the fighter’s fault, not the trainer’s fault. Andy might want to switch trainers because he wants to learn, and that’s fine. He’s free to do whatever he wants,” said Mikey.

Coach Reynoso will need to look at Ruiz as a project that he needs to work on, and perhaps he fixes him to bring back the potential he showed in his first fight with Joshua. Ruiz is clearly a diamond in the rough, and it’s going to take a lot of hard work for Reynoso to bring out the hidden qualities in his game.

Where it’s going to get interesting is when Ruiz suffers his first loss under Reynoso’s watch. Does Ruiz then give Reynoso the dump, as he did with Robles, or does hs stick it out with the trainer?

“Sometimes a fighter needs a new voice in order to do things,” said Mikey in trying to understand the rationale for Ruiz to switch trainers. “When a fighter gets comfortable with a trainer, they become real friends with real friendship, and that gets in the way of the actual work.

“And sometimes when a trainer wants him to do work, the fighter will ignore it because now ‘We’re friends. We’re cool.’ That does happen sometimes. I don’t know if that’s the case.

“But maybe Andy needs a new trainer as a new voice that’s a little more strict, and someone that he’s not been friends with. Maybe that’s what he needs,” said Mikey.

Reynoso isn’t that strict of a trainer, so if that’s what Ruiz needs, he should have looked at Teddy Atlas or Derrick James. Personally, James would be the better guy for the job to install some discipline in Ruiz’s game.

If Ruiz just wants to hang around Reynoso’s camp so that he can get some of the attention that is being given to Canelo, then this is a good move. Ruiz will get noticed a lot by the media and fans in the training side by side with Canelo. 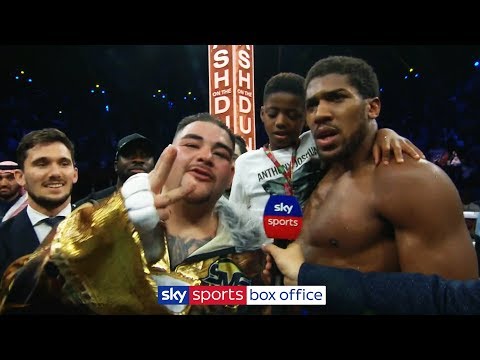 
« Hearn: ‘Whyte vs. Povetkin will be without live audience in July or August’

World titles. How important are they actually? »