Thurman: Pacquiao has my BELT, I want it back 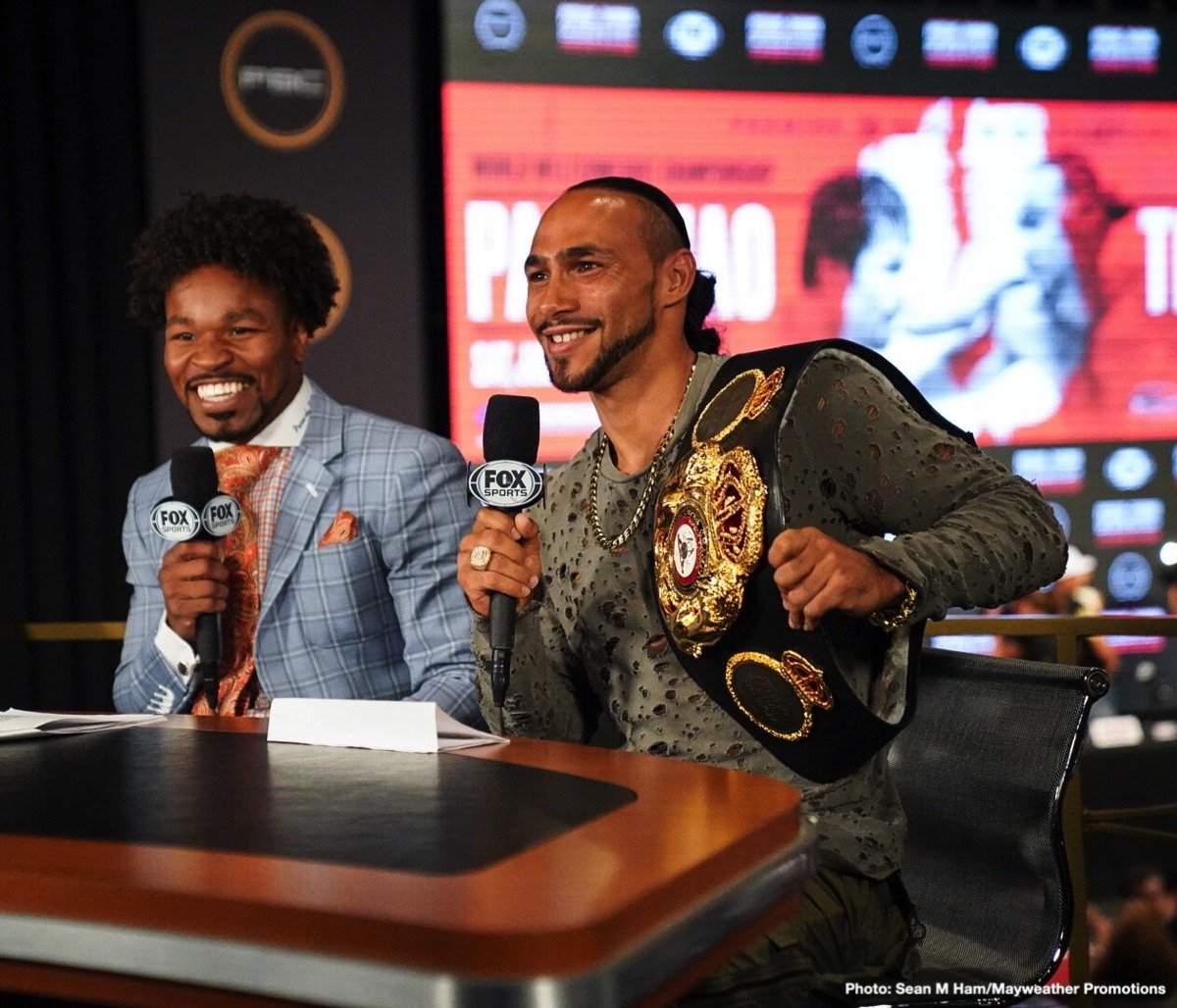 By Allan Fox: Keith Thurman wants his WBA belt back from Manny Pacquiao, and he’s hoping to face him this year in a rematch.

Since his loss to Pacquiao, Thurman has had surgery on his left hand, and he’s taking it slow in coming back.

“We got to make sure everything is good with the body. I’m still a little bit nervous about hitting anything hard,” said Thurman to CompuBox TV about his surgically repaired left hand. “I’ve got two little scars there. I’ve got two staples that hopefully, they’ll never need to be removed. They’re anchored in quite well. They’re very small. The bone is fused.

“I’m thinking summertime,” said Thurman when asked when he wants to return to the ring. “We don’t have a date on the date, and we don’t have a contract on the table right now. I’m not sure which doors are going to open up. I’ve got a few names on the top of my head that could be possibilities.

“I want to do something fun for me and exciting for the fans. Could me and Danny [Garcia] have our rematch? Do I get to step back into the ring? I’ll just fight Pacquiao this year. I don’t care. Give me that fight. That’ll be my one fight [in 2020],” said Thurman.

A rematch against Danny Garcia would seem like the best option for Thurman, given that Pacquiao is interested in fighting Mikey Garcia. Thurman beat Garcia by a close 12 round majority decision in 2017. It was a fight that Danny and his dad/trainer Angel Garcia both believed that they won, but the judges didn’t agree.

Keith wants his title back from Pacquiao

“That is a name that some fans like that match-up,” said Thurman about a fight between him and Adrien Broner. “But we’ll see. There’s a lot that could happen, but we’ve got to see what’s going to manifest.

“I heard that he wanted to get back a little sooner than I wanted to get back, and that made it seem like I wasn’t going to be able to put pressure on Pacquiao. I feel like every day that he doesn’t announce a fight date, it just makes it more likely for us to be on the same pattern.

Regardless if it’s the next fight, how active is he going to be this year? Does he want to fight Keith Thurman again? Is he going to compete in the next three months? What is he going to try and do because there are a lot of things that I believe I can do.

“If presented the opportunity, as I said, I would love to step back into the ring this summer. So the more he [Pacquiao] procrastinates, I just want my belt back.

“At least a shot to step back inside the ring and get what’s mine. The paycheck proposal is always enticing. ‘Come fight this guy for this amount,’ that is still very enticing, and I look forward to that phone call if it’s one it’sway, you know?” said Thurman.

Pacquiao hasn’t said who he wants to fight other than Mikey Garcia. It’s possible that Pacquiao might look to face Danny Garcia after the Mikey fight. Thurman isn’t in the equation right now for Manny’s next two matches.

Crawford an option for ‘One Time’

“Big rumors about him [Crawford] and Spence, a big Twitter beef,” said Thurman. “So we’ll see. I’d like to fight the champions. Spence is coming off his injuries [from car crash]. We don’t know how he’s going to perform. The fans are interested. We want to see how his body is doing, how he’s feeling, and how he’s moving about.

“I don’t think there’s much for him to do besides take care of himself and prepare to get back in the ring in the best physical shape possible,” said Thurman about Spence. “Work with his team and his coaches, and whatever he has to do for his therapy. But as long as his shoulders, elbows, his knees, and everything that’s required to be a physically good fighter,” said Thurman.

WBO welterweight champion Terence Crawford is unlikely for Thurman to fight. Premier Boxing Champions management could steer Thurman towards one of their fighters when he returns to the ring. Crawford is with Top Rank and promoted by Bob Arum. It’s very unlikely that Thurman will agree to fight Crawford.

Unless Top Rank gives Thurman a considerable offer, he’s probably not going to accept the fight.

Spence should be able to come back from the car crash

“As long as those didn’t get banged up that badly, I think he’s going to be able to perform strong, and I look forward to his next performance as well. I heard oral surgery of the mouth,” said Thurman in talking about the physical problems Spence is rumored to have suffered in his car crash.

Welterweight division still without a king

“I think every since Floyd [Mayweather] left, there never was a king,” said Thurman when asked who is the King of the welterweight division now. “It’s tough to be a King. A King doesn’t just get crowned overnight, in my opinion. If you dethrone a King, that’s one thing. But for the most part, when a King steps down, there’s no automatic dethroning.

“So because of that, you have to work to become a king of a division. We know that Floyd put in that work before he was ever considered. He never crowned himself King. He crowned himself, TBE, ‘The Best Ever,’ you know? That was his way of crowning himself.

“A condo,” said Thurman when asked what the first thing was that he bought with the money he got from the Pacquiao fight. “Nothing else mattered—everything else I already had. I was renting previous to the Pacquiao fight, and I was living in a furnished condo. It cost me $7K a month. So I got a little two-bedroom for the wife and me in the heart of downtown with excellent security. She feels safe, and I feel safe,” said Thurman.

A lot of boxing fans say that Crawford is the new King of the 147-pound division, but you can’t agree when you look at the experience he has in that weight class. Crawford hasn’t fought anyone god, and that makes it difficult to say if he’s the new King. 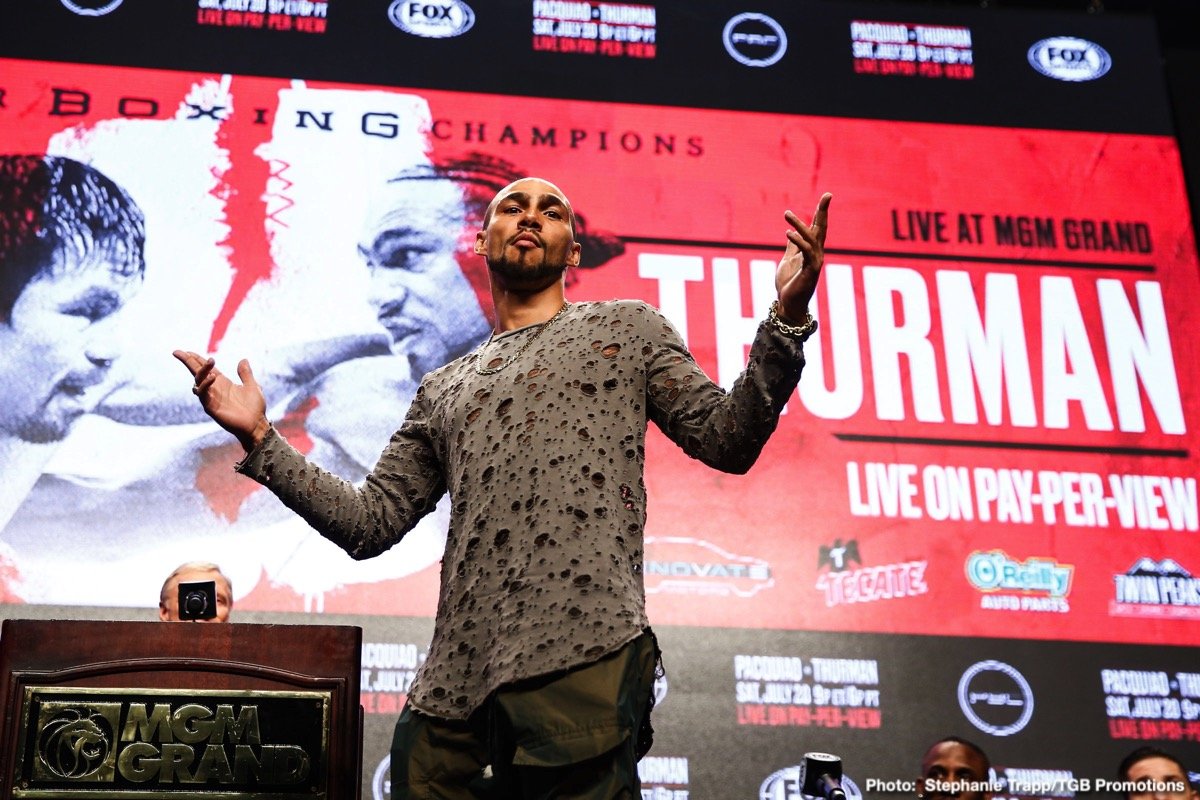 “I think so much happened in the first round of that knockdown,” said Thurman on his fight with Pacquiao. “The one obvious thing is Pacquiao has the fighting spirit. When I was pushing him and bullying him all in the first round, he gathered a little bit of himself towards the end, and he said, ‘I’m tired of this. I’m swinging on your a**.’

“At that moment, I didn’t feel it. I was like, ‘I’m going to back up. I’m going to give him some space. What do you want to do?’ And he was like ‘bam-bam, that’s what I want to do.’ I was like, ‘S***.’ I was backing up, and my hand was a little down. The backward movement, regardless of the there was the foot thing.

“It wasn’t a big thing. You get a slight mix-up with a southpaw, but it was the momentum of me backing up instead of me moving forward. I was already pushing him back and winning the round. So I didn’t give him that breather, he doesn’t have the same opportunity. You have to have the ability, and you have to have the chance,” said Thurman.

It was a blunder on Thurman’s part in him relaxing late in the first round against Manny because that left him in a vulnerable situation. Pacquiao took advantage of Thurman easing up by attacking him immediately to put him down.

Initially, it looked like Thurman was going to have an easy time with Pacquiao in the opening round. Pacquiao did a good job of attacking Thurman to drop him.

Pacquiao took advantage of a mistake by Thurman

“He wanted to make his presence felt in the fight, and the first time that he burst out of the shotgun barrel, he came with some heat,” said Thurman of Pacquiao in the first round. “He just got me at the right time. Sometimes I tell people, it’s not every punch. You tell me how many blows I landed, and those are great stats.

“I know I put on an excellent performance. But sometimes it’s the illusionary effect that you did the most damage because you landed a few punches at the right time at a specific time in one particular round. You do what we call ‘steal the show.’ I feel like, for me, this is my Roberto Duran fight.

“I don’t feel like I lost that fight. But I also know what it’s like to be in close matches where you leave it in the hands of the judges. There are times where you have to take the ‘L’ because it’s what they saw for that day. For that day, you didn’t do enough for them. For me, I always say there are millions of attendants and viewers, but there’s only three people that matter. Three spectators matter,” said Thurman.

Thurman likely eased up only because he was tired and wanted a rest break. That was a mistake because you can’t rest against Pacquiao. After all, he’ll take advantage of it.