Joe Calzaghe reacts to Carl Froch’s challenge for a fight

By Charles Brun: Joe Calzaghe brushed off Carl Froch’s challenge of him by saying it’s “mad” for him to be still thinking of facing him after all these years.  Earlier this week, a bitter sounding former IBF/WBA/WBC super middleweight champion Froch (33-2, 24 KOs) said he would come out of retirement to face Calzaghe (46-0, 32 KOs) if he were interested.

Calzaghe thinks it’s amusing that the 43-year-old Froch is still talking about wanting to fight him after all these years. Froch retired in 2014, and the 48-year-old Calzaghe has been out of boxing since his win over Mikkel Kessler in 2008. That’s 12 years.

Froch says he wasn’t happy with former IBF/WBA/WBC/WBO 168-lb champion Calzaghe not giving him a fight when they were both competing. Additionally, Froch didn’t like that Calzaghe didn’t validate him by giving him praise for his accomplishments in winning titles after he retired. Froch would have liked for Calzaghe to have given him at least some credit for what he’d done. That didn’t happen and all of it

Froch appears to be having a difficult time forgetting about Calzaghe after all these years. By now, Froch should have moved on, but he hasn’t. He’s still thinking about Joe. If Froch had stuck around longer instead of retiring when he was still at the top in 2014, he’d have more boxing fans still talking about him today.

Froch still had perhaps three good years left in him when he walked away from the sport, and he made a wrong decision to retire so soon. He ended his career with a victory over George Groves, who was just starting.

Calzaghe: I’d have been too fast for him

“It’s mad, I’m still living in his head after all these years,” Calzaghe said to Talksport. “I’ve done everything you can achieve in boxing.  I know what would have happened, and I don’t take much notice of what he says.

“When I was at my peak, I’d have been too fast and too sharp for him.
“I think I’d have beaten any super-middleweight, maybe not Roy Jones Jr at his peak. I’m 48, and I’ve been retired for ten years; I’m happy with my career,” said Calzaghe.

Froch’s losses to Mikkel Kessler and Andre Ward permanently burned the image of him not being as good as Calzaghe in the minds of boxing fans. Any argument that Froch might have had about him potentially beating Calzaghe went out the window with his defeats to Kessler and Ward.

It doesn’t matter that Froch beat Kessler in their rematch in 2013. This wasn’t the same Kessler that had beaten him handily in 2010 in the Super Six Tournament. Froch also was outboxed by the slick American Andre Dirrell in the Super Six tourney in October 2009 in Nottingham, England.

The judges gave Froch a questionable 12 round split decision victory. However, boxing fans, both in the UK and U.S, believed that Dirrell should have been given the win. What Dirrell showed is that Froch has problems with slick fighters with good hand and foot speed. If Calzaghe had fought Froch, he likely would have outboxed him the way Dirrell did.

Calzaghe beat some of the best fighters in the sport, holding down world titles at 168 from 1997 to 2008. He retired as the WBA/WBC/WBO super middleweight champion in 2008.

These are some of Calzaghe’s big wins during his 15-year career:

Some of the victories Calzaghe racked up during his career were incredible, and the way that he did it was even more impressive. He schooled fighters like Hopkins, Jones, Kessler, Eubank, and Woodhall. 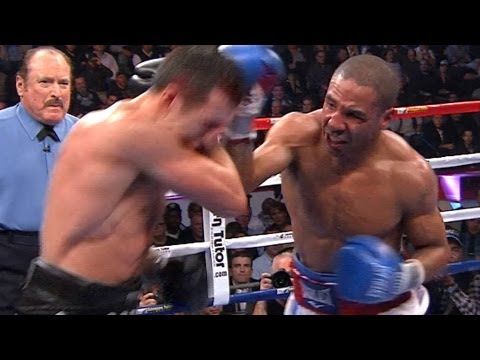