Johnson, 34, says he views the undefeated Beterbiev as a “freak of nature” and the best fighter in the 175-pound weight class today. He picks Beterbiev to beat Bivol as well as undefeated Joshua Buatsi.

Buatsi lacks the experience to take on Beterbiev now, and it could be a disaster if Hearn put that fight together right now.

Bivol, 29, has made it known that he would like to take on former WBO light heavyweight champion Canelo Alvarez at 175 or 168. The highly technically skilled Bivol doesn’t care which weight he faces Canelo at, being that he feels he can beat him. He just wants a piece of Canelo so that he can test himself against one of the best fighters in boxing.

Bivol has a much better chance of getting a unification fight with Beterbiev. Hence, that’s one of the reasons why Bivol’s co-promoter Eddie Hearn is so interested in putting that fight together. Hearn also wants to match Buatsi against Beterbiev.

Callum gave IBF champion Beterbiev a run for his money in their fight two years ago in October 2018 in Chicago, Illinois. Beterbiev got off to a quick start in dropping Johnson with a right to the head in the first round.

It looked as if the two-time Russian Olympian Beterbiev was going to make easy work of Johnson as the round ended. However, in round two, the hard-punching Johnson came back to hurt Beterbiev and drop him with a left hook to the head.

At this point, Johnson made a critical error in electing not to pour it on to try and finish the hurt Beterbiev after he got back to his feet. Two rounds later, Johnson would regret this mistake, as Beterbiev knocked him down in round 4 and stopped him when he failed to beat the count.

Johnson has since rebounded from that loss to defeat Sean Monaghan by a third-round knockout last year in March 2019. He’s fighting Igor Mikhalkin (23-2, 10 KOs) for the vacant European Boxing Union light heavyweight title on July 4 at the Manchester Arena in Manchester, England.

Artur Beterbiev is the best in the division

“If it’s going to be against the Chinese fellow that it’s looking like, yeah, I think he’s ready for that fight,” said Callum Johnson to Boxing Social about Joshua Buatsi. “If it’s against Beterbiev, I don’t think he’d beat Beterbiev. It’s not for me to say what he’s ready for. I’ve not seen him train.

“I’ve never seen him box, but I’ve seen clips. He’s a good fighter. You don’t win medals in the Olympics if you’re not, and he’s doing everything asked of him as a pro. Beterbiev,” said Johnson when asked who wins between him and Dmitry Bivol. “I believe he’s the best in the division, and he beats everyone in the division.

“And I believe on my day; I could win that fight [against Beterbiev]. It would take some doing. I do think he’s the best in the division. There’s no argument in that. Oleksandr Gvozdyk, everybody thought he was going to win that fight, and he was the favorite.

“I said to everybody that Beterbiev would stop him, and he did. And I think the man is a freak of nature,” said Johnson.

Beterbiev’s last victory over WBC light heavyweight champion Oleksandr Gvozdyk (17-1, 14 KOs) on October 18 cemented him in as the #1 fighter in the 175-pound division.

Surprisingly, Beterbiev came into the contest as the underdog against the 2012 Olympian bronze medalist Gvozdyk, who a lot of boxing fans were high on due to his victory over Adonis ‘Superman’ Stevenson.

Beterbiev overpowered Gvozdyk with his clubbing headshots and his brutal body attack. Gvozdyk looked like he hadn’t prepared himself to deal with the body shots that Beterbiev was hammering him with the entire fight.

“I think that’s a great fight,” said Johnson when asked about his thoughts on a hypothetical clash between Canelo Alvarez and Bivol at 168. “Bivol has campaigned at light heavyweight.

“I know he’s beaten Kovalev, but I think Kovalev was shot, to be honest. It’s a great fight. A 50-50 fight and I wouldn’t like to pick the winner. I’d have to go Canelo with his back against it, but it’s definitely a fight that is very interesting,” said Johnson on a Canelo vs. Bivol fight.

Bivol might have too much size and technical skills for a fighter like Canelo, who has significant stamina problems that have plagued him his entire career. All the little tricks that Canelo used to beat Gennadiy Golovkin and Sergey Kovalev, they likely wouldn’t work against Bivol.

Canelo likes to back up against the ropes and look to counter. Against a tall fighter like Bivol, who has an excellent jab, he would pick Canelo apart if he fought on the ropes.

Canelo could have picked Biviol when he moved up to 175 in search of his fourth division world title.  Canelo chose the faded 36-year-old Kovalev to fight instead. That a sign of respect to Bivol that he didn’t pick him.

The only way Bivol gets a fight with Canelo is if he moves down to 168, and he beats some of the champions in the division.

“It got officially announced for May the 2nd on the Dillian Whyte card,” said Johnson on his fight against Igor Mikhalkin. “Obviously, it’s been postponed for July the 4th. From the looks of it, it’s the same opponent and same venue. It’s just a different date two weeks later. It’s not ideal, but it’s something everybody has to deal with.

“I’m 34 and very fresh, and I’m in a physically better place than I’ve been in my life. I feel fresh like I’m 25, and I’ve got no miles on the clock. So I feel like I’ve got a good two or three years in me at least,” said Johnson.

The Johnson vs. Mikhalkin fight will likely be postponed again due to the pandemic. When it does eventually happen, Johnson will cause Mikhalkin a lot of problems with his punching power.

The 34-year-old Russian fighter Mikhalkin was blown out in seven rounds by Kovalev two years ago in 2018. Since that fight, Mikhalkin has picked up two wins beating the lower level fighters Bernard Donfack and Timur Nikarkhoev. 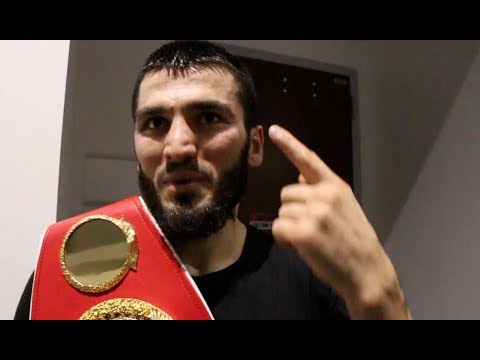 Abel Sanchez WORRIED Golovkin could get hurt by Canelo »