Abel Sanchez WORRIED Golovkin could get hurt by Canelo

By Sean Jones: Gennadiy ‘GGG’ Golovkin’s ex-trainer Abel Sanchez is worried that he could wind up getting hurt by Canelo Alvarez when they face each other in their trilogy fight this year.

Sanchez views Canelo as now in the zenith of his career at 29, and he was impressed with his recent knockout of WBO light heavyweight champion Sergey Kovalev last November.

Canelo and GGG to fight in September

The two fighters are slated to meet for the third time this September, and Sanchez thinks that the 38-year-old Golovkin (40-1-1, 35 KOs) could get knocked out this time by the famous Mexican star Canelo (53-1-2, 36 KOs).

Sanchez worked Golovkin’s corner for the two previous contests between him and Alvarez in 2017 and 2018. The first fight was scored a controversial 12 round draw. In the second match in 2018, the judges had Canelo edging it by a 12 round majority decision.

Some boxing fans had GGG winning the first fight and fighting well enough to rate a draw in the second.

After Golovkin’s loss to Canelo in 2018, he replaced Sanchez with trainer Johnathon Banks, and he’s since won his last two fights against Steve Rolls and Sergiy Derevyanchenko. GGG had major problems beating Derevyanchenko by a close 12 round decision

Sanchez: Golovkin could get hurt by Canelo

“This one maybe will hurt. Not because I’m not with him, but it [could] hurt because he gets hurt,” said Abel Sanchez about Golovkin in an interview on The Pug and Copp Boxing Show for the Athletic.

“It’s the most dangerous because you’re talking about a guy [in Canelo Alvarez] who is at his peak now and believes he can do the same thing to Gennadiy that he did to Kovalev. [Canelo] Baited and waited for that right moment, and it was destructive,” said Sanchez.

Unless Golovkin got old overnight, he wouldn’t be at risk of getting knocked out by Canelo. If Canelo were capable of throwing sustained punches without gassing out, then you could say that GGG might be in danger, but that’s not the case. Canelo needs too many rest breaks for him to KO Golovkin.

Abel shouldn’t get too enamored with what Canelo did against Kovalev because he was facing an over-the-hill fighter. This wasn’t the prime Kovalev from 2012. He’d gotten old by the time Canelo fought him.

Kovalev fought Canelo like he was taking it easy on him, which is why a lot of boxing fans were saying afterward that it looked like a FIXED fight. It was such an odd-looking fight that it’s difficult to give Canelo any credit whatsoever for the victory.

“I would hate to see Gennady go into that fight, or I would rather not see the fight than to see Gennadiy succumb to something like that, not being prepared physically and mentally,” said Sanchez.

Canelo couldn’t knock out Daniel Jacobs in their fight in 2019, and that was the last time he fought a quality fighter. Other than that, the only guys that Canelo has knocked out in the previous four years were either mediocre guys or shot fighters.

These are opposition has knocked out since 2016:

Those aren’t good fighters, or at least they weren’t when Canelo fought them. Kovalev was an excellent talent, but he’s been on the downside of his career since 2017.

Instead of Sanchez going overboard in pressing Canelo for his performance against Kovalev, he should be asking him to try to do the same thing against IBF/WBC light heavyweight champion Artur Beterbiev.

If Canelo knocks out Beterbiev, then you can say he deserves to be praised. The Kovalev fight was just too strange-looking to give Canelo any credit. 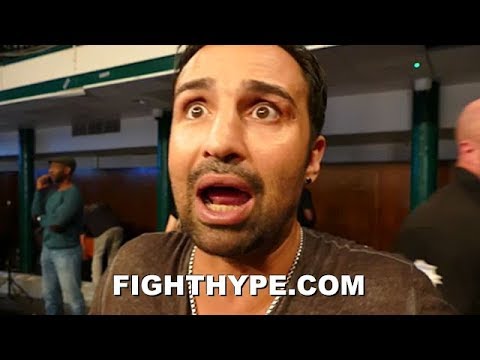