Tyson Fury: ‘I’ll be on Deontay Wilder like a cheap suit’

By Tim Royner: Tyson Fury says he’s going to be in the attack mode from round one against Deontay Wilder, and he’s not going to stop with the constant pressure until he’s knocked out. Fury (29-0-1, 20 KOs) believes that his best chance for unseating WBC heavyweight champion Wilder (42-0-1, 41 KOs) is to attack him 100% of the time during their rematch this Saturday at the MGM Grand in Las Vegas.

What we don’t know about Fury is if he’s serious about wanting to pressure Wilder. He’s not someone that’s going to give his plan away before the fight. That goes for Fury’s weight as well. Tyson, 31, has been saying that he’ll be weighing 270 lbs when he steps inside the ring with Wilder, but he looks considerably lighter than the 256 lbs he weighed for the first fight.

Fury feels that he tried to box Wilder last time, but the judges didn’t give him the decision, which he felt he deserved.

Fury: Deontay has mental issues from the first fight

“Deontay Wilder has got mental issues at the moment because he hit me with his best two punches clean for free, and it put me down but I got back up,” said Fury. “Every other man that he’s hit before has stayed down.

“Psychologically that has to have had an effect on him, a long-lasting effect,” Fury said. “I saw something yesterday at the press conference where he said, ‘The only way you can ever beat Tyson Fury is to nail him to the canvas.’ That’s very, very true, Deontay, and you ain’t the man to do it,” said Fury.

Wilder isn’t coming into the rematch with Fury with a sense of discouragement from failing to keep him down the last time they fought. If anything, Wilder will be more motivated to hit Fury with everything he’s got with his right hands to make sure he doesn’t get up again when he drops him.

It’s almost a certainty that Fury will go down at some point in the fight on Saturday. Wilder hits too hard, and he showed that Fury couldn’t handle his power last time they fought. The 6’7″ Deontay only hit Fury cleanly on two occasions with his right hands, and both times he went down. So what does that tell you?

Fury could get robbed again

“Usually in the rematch, you get something similar to the first fight,” said Kellerman to Fighthub. “I saw in the first fight Tyson Fury win a decision and get robbed and get a draw. Something like that may be in the rematch too because quiet rounds that we give to Fury because it seems like he’s controlling the action.

“If you really concentrate, there’s maybe nothing to choose from. Maybe the judge likes it for the fact that Deontay is coming forward. So maybe there are three rounds like that, and Tyson wins a bunch of other rounds more decisively, but then Wilder knocks him down twice and gets those two or three-point rounds.

“You wind up with a close decision again, and Wilder could get it again. It’s a rematch of a dramatic, terrific fight, it’s a contrast in styles, and anything can happen because heavyweight boxing isn’t proportional like welterweight boxing is.

What Kellerman is basically saying is the judges could give Wilder rounds where Fury is landing more, and appearing to be in control. The reason the judges will give Wilder the rounds is that his shots will land with more power, and he’ll get the crowd excited each time he lands. If Fury is landing with only 10% of the power of Wilder’s punches do, that’s going to sway the judges to give him the rounds. It won’t matter if Fury outlands Wilder by 10-15 more punches in the round. That won’t be enough.

Tyson Fury can knockout Wilder if he catches him

“So Tyson Fury is not known as a big puncher, and Deontay Wilder can rock him. But if he gets one-off, and he gets his body behind you, you’re going to go if he hits you,” said Kellerman. “Deontay’s power is absurd. It’s nuclear. So you really could get a knockout either way and yet you’ve seen Fury rise from Wilder’s power.

“So you could see a fight that lasts the distance, and we’ve seen Deontay buzzed against Ortiz, who is a devastating puncher, and shake it off to come through and win by a knockout. I can see a decision going either way, and I can see a knockout generally. I can see a fight where Tyson Fury moves to the inside as he claims. And I can see him trying to do so, and getting caught and knocked cold.

“I can see a fight where he actually gets in, and Deontay surprises us. ‘Where did this inside game come from Deontay?’ The game has changed, and the competition at heavyweight. There aren’t that many good heavyweights,” said Kellerman.

Fury would need to make huge strides with his punching power for him to have a shot at knocking Wilder out. Tyson hired Sugar Hill Steward to improve his power, but he’s unlikely to change anything. Sugar Hill might be able to motivate Fury to come forward more to go on the attack, but he’s not going to be able to change the limits of his body. Every fighter has limits of how hard they can punch and remains pretty much consistent.

“The top is very good right now,” said Kellerman about the heavyweight division. “If you look at Tyson Fury, he has a win over Wladimir Klitschko, who was still the champ, he has the draw, which I thought he won against Deontay Wilder, but what else does he have on the resume?

“SSS Cunningham was a good win. He got up off the floor,” said Kellerman about Fury. “Deontay Wilder’s 2 wins against Ortiz, the Stiverne decision, Stiverne still had something left, okay, and the draw against Fury. There’s very excellent stuff at the top of the resume, but it’s not a deep resume.

“Actually, Anthony Joshua has the deepest resume out of all of those guys, and that’s modern in that weight class. The best smaller athletes that are tough can still make money in boxing. And the best big athletes that are tough play in the NFL for the most part, and fall down to boxing. They got a knee injury in high school, and they became boxers.

“They’ve got a late start, and they come boxers. So I think the game has changed somewhat. They may be talking about retirement, but they haven’t taken a ton of wear and tear. It means they’ve made a ton of money, and don’t want to go through torturing themselves in training camp more times,” said Kellerman.

It’s true that Fury and Wilder lack the deep resume that Anthony Joshua possesses. But a lot of the guys that Joshua has fought have been old-timers and fighters that weren’t that good. 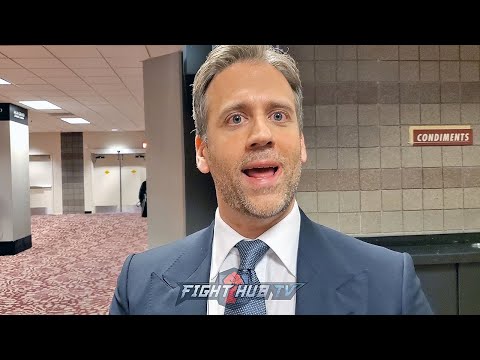 
« Emanuel Navarrete: ‘I want to be a global superstar’

Foster vs. Reid 2 LIVE on ESPN+ from London, UK on Saturday »