Foster vs. Reid 2 LIVE on ESPN+ from London, UK on Saturday 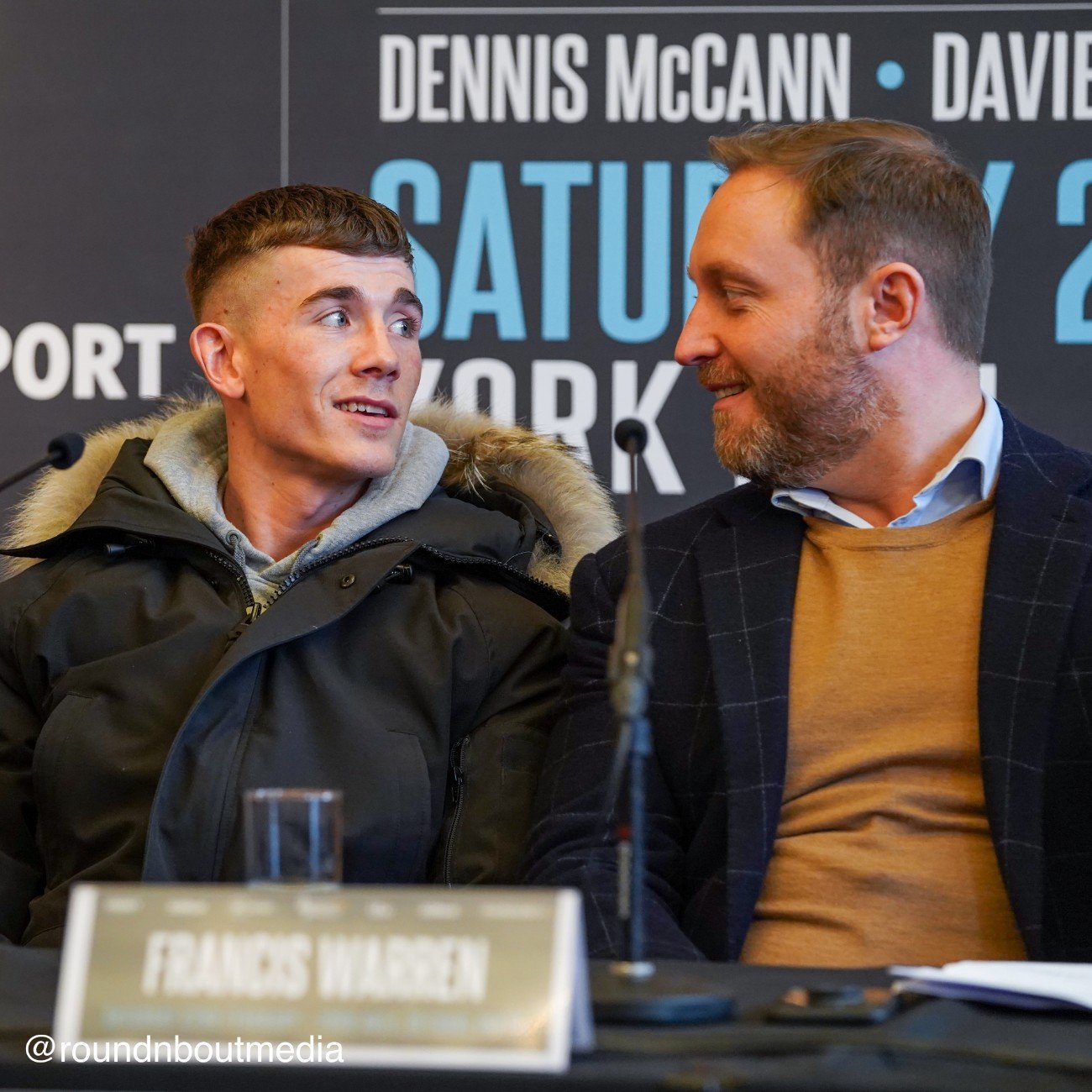 Hours before the most anticipated rematch in years — Deontay Wilder versus Tyson Fury — Lucien Reid and Brad Foster will settle a score of their own. Foster will defend his Commonwealth and British super bantamweight titles in a 12-round rematch Saturday from London’s York Hall on a card promoted by Frank Warren’s Queensberry Promotions.

Foster and Reid fought last September, with Foster retaining his titles via majority draw in a pitched battle that saw both men cut. In the co-feature, 19-year-old bantamweight sensation Dennis “The Menace” McCann (5-0, 4 KOs) will face Pablo Narvaez in a six-rounder.

Foster (11-0-2, 4 KOs) won the British super bantamweight title with a points verdict over Josh Wale in March 2019, then added the Commonwealth belt to his collection two months later with a 12th-round TKO over Ashley Lane. Reid (8-0-2, 4 KOs) appeared to have done enough to defeat Foster last September, but after 12 rounds, two of the judges scored it even. The London native hopes to gain revenge in one of the new year’s most anticipated all-British tilts.

In other action on ESPN+:

In a 10-round eliminator for the British super middleweight title, Kody Davies (10-0, 3 KOs) will face the hard-hitting Umar Sadiq (9-1, 6 KOs), winner of three straight by knockout.
Former UK amateur standout Henry Turner (1-0, 0 KOs) will take the next step in a four-round super lightweight test against durable Welshman Rhys Saunders (3-22-1, 1 KO).
Willy “Braveheart” Hutchinson (10-0,7 KOs) will fight an opponent to be named in an eight-round light heavyweight bout.

THE LEAD CHARACTERS from Saturday’s show at York Hall assembled today a short distance from the venue to preview what promises to be a cracking night of boxing on BT Sport and ITV ahead of the BT Box Office blockbuster between Tyson Fury and Deontay Wilder over in Las Vegas at the MGM Grand Garden Arena.

Brad Foster vs Lucien Reid tops the bill in a rematch with the British and Commonwealth super-bantamweight titles at stake following a majority draw at the same venue in September. Kody Davies also faces Umar Sadiq in an official eliminator for the British super-middleweight title.

Unbeaten super middle Willy Hutchinson and top bantamweight prospect Dennis McCann were also in attendance and below are selected quotes from the media gathering.

It is very exciting to build up the career of someone like Dennis McCann from scratch. He is sitting there with a wry smile and a Dennis the Menace scarf on, but when he gets in the ring he is all about business. And he is doing things that are being likened to a certain Naseem Hamed, but he is very much his own man and is very much managing his own way in this sport.

He has not put a foot wrong and if he keeps working hard and listening to Alan Smith at the Queensberry iBox Gym then I can’t see too much-going wrong for Dennis.

Warren: Hutchinson is a gem

Willy Hutchinson is another real gem and it is a pleasure to work with him. He is talking about dropping down to super middle so he will be very interested in the big Davies-Sadiq fight and him against the winner would be an interesting fight to make later this year. Willy is a guy we have put a lot of focus and attention on and is someone I firmly believe will win a world title.

I rate the Umar-Kody fight highly and it has been given official eliminator status by the Board towards the British title currently held by Lerrone Richards. These two guys didn’t have to take it and a lot of fighters in their positions would have taken an eight-rounder to keep ticking along. They want to show who the best in the stable is and this is the way to prove it.

I think Brad and Lucien is the biggest rematch on Saturday, without a doubt! It was a terrific fight first time around and, if Brad is honest with himself, he didn’t turn up with the full capabilities he’s got and, if Lucien is honest with himself, he surprised everybody with what he did over 12 rounds. They both know what each other are about now and they will look forward to this even more than the first one just to prove a point. I can’t wait to see it again.

I will definitely have to be patient because it is Francis’ and Alan’s job to keep me back. To be honest, I would fight anyone in my division right now and the weight above, it doesn’t bother me at all. I have been sparring with some big kids and none of them can deal with me, so when I go in with someone my own size I take them out in four or five rounds.

Being compared with Naz is a very good thing but there is only one Dennis McCann and I am going to be a world champion too. I have watched him loads of times and he Facetimed me once. He has put a bit of beef on, hasn’t he? I will be that size too when I have retired!

It is all about learning. I’ve had 10 fights now and this will be my 11th – I am just learning and progressing. As long as I keep winning and moving forward, that is the main thing. My partnership with Dom Ingle has gone very well and he takes care of me.

I have just got married and have got my wife now, but Dom is still helping me out and makes food for me and stuff.  And I am always with him and we have got a good relationship that will hopefully go all the way to the top. I am still only young and it is time to make super middleweight and make some noise. Kody and Umar are fighting at the weekend and I wouldn’t mind fighting the winner out of them.

I didn’t see my loss to Zak Chelli as a setback and I’d rather lose early in my career than later on. And I have six fights since and have backed myself because I know where I am going and I know my capabilities. I have stopped five out of the last six fighters I have boxed, although they were not fighters with winning records, the result is I am doing what I am supposed to do. And I am now back to where I should have been a year ago and I am looking forward to this fight.

I am really happy and appreciative of Kody’s team for taking this fight because a lot wouldn’t and when they took it, it wasn’t even an eliminator. It has been very hard for me to get matched since losing to Zak so I am really happy and on Saturday night the fans are in for a great show. I am confident I am going to stop him.

I see the fight going how I want it to go. Me and Gavin Rees work every day and Gavin has got the recipe to be a world champion and I follow it day in, day out. I don’t concentrate on my opponent and what he can do, I concentrate on myself and my ability to adapt to what is in front of me. Respect to Umar for taking this fight. People say you don’t have to take this fight or that, but the reality is for me I have got to take these fights because it is my life.

It is my job, not a hobby, it is what I do and it is in my blood. Anything that will progress my career I will take with both hands, simple as that. I will be calm, collected and will put on a fantastic display. If I knew super middleweight would be this easy to make when I turned pro I would never have boxed at light heavy in the first place. I can tell you I am in the best shape, both physically and mentally.

It was a good and entertaining fight where I don’t think I was at my best last time, so I’ve got to settle the score and put it right. Everyone has an opinion and some people say he won, some say I won and some say it was a draw.

I am confident of settling it now and I just need to punch him more times than he punches me! I had three 12 rounds fights in a short space of time so I was probably a bit burnt out, so I rested over Christmas and let a few injuries heal. It has to be different this time. The ITV exposure will be massive for both of us and I cannot wait to get in there.

Without exposure, you don’t get to a certain level and every boxer needs it. ITV will hit the general public and not just the boxing fans so I am looking forward to it and seeing the numbers as well. Don’t get me wrong, I could get hit with a jab and think I’ve lost the round.

I’m just like that but I do believe I won last time by at least one round and I have not heard one person say that Brad won or it was a draw. I am going to make it right on Saturday and I have to for my boxing life and my son.