Tyson Fury: ‘Eddie Hearn is a CLOWN, he mentions my name to stay relevant’ 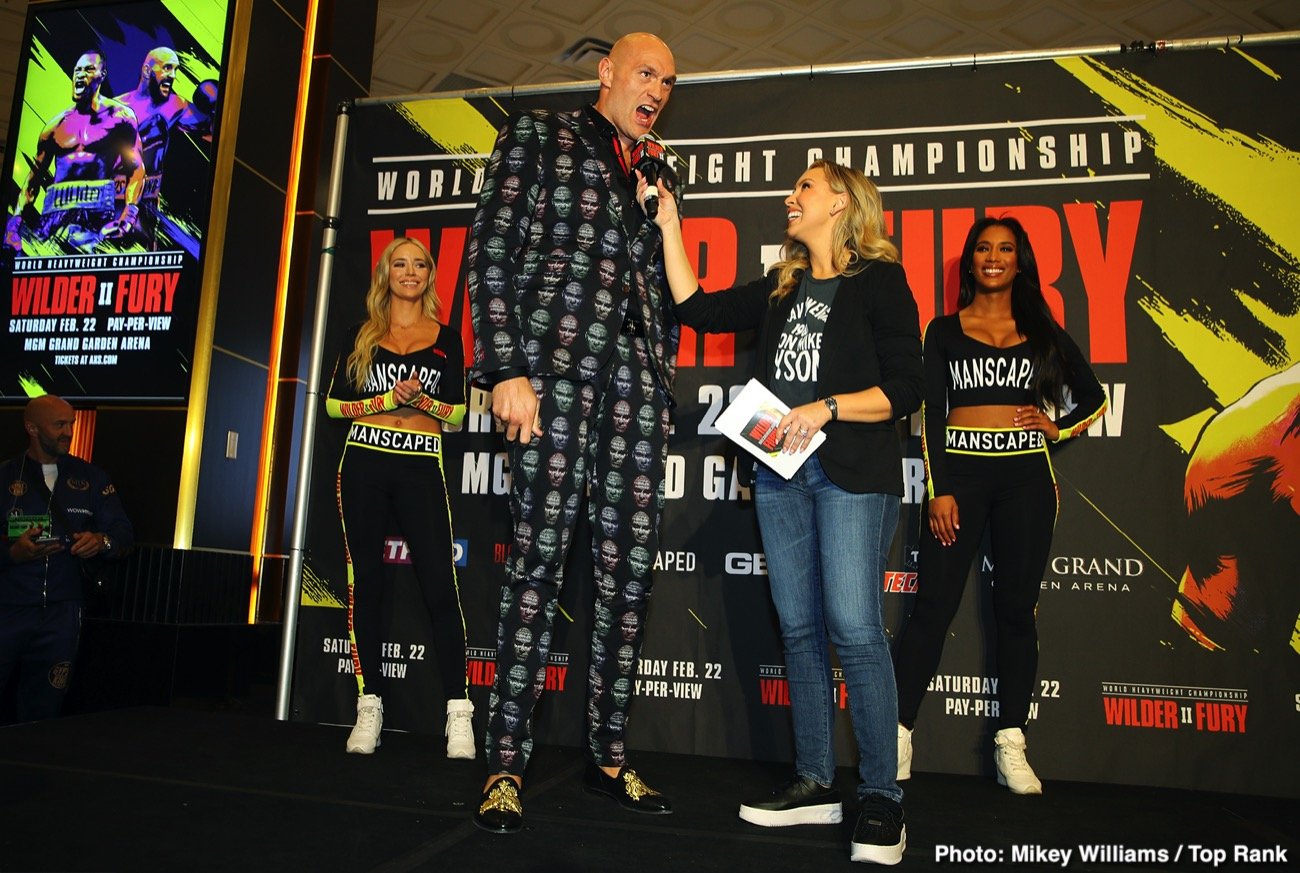 By Charles Brun: Tyson Fury had nothing good to say about Matchroom promoter Eddie Hearn today in response to the promoter talking gossip rumors about Tyson’s training camp, and he’s now changed his prediction as a result in picking Deontay Wilder to win. In fact, Hearn is picking Wilder (42-0-1, 41 KOs) to win by stoppage on Saturday.

Wilder will be defending his WBC title against Fury this Saturday night at the MGM Grand in Las Vegas, Nevada.

Fury’s promoter Bob Arum was furious at talking about Hearn supposedly having a source inside Tyson’s training camp that gave him a bit of information about things not going well for him.

Hearn didn’t say what the source told him, but a lot of fans think it has to do with Fury not sparring to protect his right eye, which was cut massively in his last fight against Otto Wallin. They also think Fury is having problems with his condition.

“Eddie Hearn is a w*****r,” said Fury to ESPN MMA. “Not really, the man’s a clown. I don’t care what he says, and who he says. He mentions my name to keep relevant and to keep his fighter’s relevant, which that’s up to them. Let them do what they got to do. No idea, and no interest either.

“It doesn’t matter how he fights,” said Fury. “I don’t watch Deontay Wilder, and I don’t care what he does. It’s about me and what I do on the night. I got three fights left on my contract. After that’s over, I’ll think about walking away. Because I don’t need to fight anymore.

“What’s the point? What am I going to gain from it?” said Fury. ” When I beat Wilder on Saturday, the game will have been completed. I’ll have won every single belt. After this win on Saturday, there will be nothing more to do. When I kick his a– on Saturday, I’ll definitely sing a song. About 270. I’m heavier but leaner if that makes sense,” said Fury.

“I thought [Fury] might win, but I heard a few things in the camp. Might be rubbish, but I do think Wilder’s gonna win by stoppage,” said Hearn to talksport.com.

Hearn could be right about his prediction for Wilder winning the fight by knockout. Fury has lost a lot of weight, and he’s not looking strong right now. Also, Fury was knocked out in his last fight against Wilder, and he could prove just as vulnerable to his right hand in the rematch.

Wilder claims that his right arm was broken during training camp, and he only had a short period of time to train with the arm. He says his arm was at 50% or less for the fight. That might explain why Wilder has looked so strong in his last 2 fights since the Fury match. Wilder has got his power at 100%, and he’s blowing people out.

Fury was in good shape for first Wilder fight

“That’s what I say. Actually, I was in great shape for the first fight,” said Fury to Sky Sports Boxing on his first fight with Wilder. “I was in fantastic shape. The thing about the first fight was, I was out of the ring for three years abusing my body. I only came back and within six months, I was fighting Deontay Wilder for the championship of the world.

This time it’s not the case. This time I’ve been back since June of 2018 to now end of February 2020. It’ll be two years in June. So yeah, I’ve had all that time to prepare, get my energy back and my strength back in.

“I’ve lost all the weight, and I’ve had all the fights,” said Fury. “I’m match-fit. I’ve been in 12 round fights, so I’m ready to go now. I’m really ready. Yeah, for sure,” said Fury when asked if he feels he’s in better shape for the Wilder rematch than he was for his 2015 fight against Wladimir Klitschko,” said Fury.

It’s good that Fury is finally admitting that he wasn’t in bad shape for the first Wilder fight since his father maintains that he was in bad shape. Fury looked as good against Wilder as he did in his last fight against Otto Wallin.

A lot of people weren’t entirely impressed with Fury’s performance against Wladimir Klitschko. Fury didn’t throw a lot of punches, and the ones that he did throw looked weak. He won the fight based on movement, his long reach and mostly because Wladimir was afraid to throw punches. By that stage in Wladimir’s career, he lost his hand-eye coordination, and his punches were no longer accurate.

So when he fought guys like Bryant Jennings and Kubrat Pulev, he was mostly just throwing jabs, because he wasn’t willing to take the chance of missing with a right hand and getting countered.

“What people don’t know is I lost six stones for the Klitschko fight, and then I fought Klitschko,” said Fury. “Pretty silly, to be fair. Very silly actually. Imagine how good I could have been had I started the camp in shape. So that’s six stones seven pounds off, and then fought the second-longest champion in history, and still beat him.

“So when you do stuff like that, you’re obviously a special talent, aren’t you?” said Fury. “You don’t realize it until you say it. What was that? I lost six stones and seven pounds before I fought Klitschko. How was that even possible” And then go and beat a man that is always in shape. It was pretty awesome for sure. All my fight camps have been weight loss camps.

“Even the biggest fights ever, they were all weight-loss camps,” said Fury. “The patch I’ve been on since June 2018 is I have ballooned at all. I’ve kept and maintained a weight level. This is my sixth camp in a row. I’ve never been this active. You’ve got the two best heavyweights in the world fighting each other,” said Fury.

Fury was a real mess five years ago with the way he would put on a lot of weight in between fights. As he says, his training camps became de facto fat farms in which he would spend the greater part of them shedding massive amounts of weight.

« There’s more than one interesting rematch this weekend

De La Hoya on Caleb Plant: ‘It’s OVER, you won’t get Canelo opportunity ever again’ »