By Sean Jones: Mikey Garcia reacted positively to former WBC lightweight champion Devin Haney calling him out this week following a face-off that he did at the request of the reporters. Garcia (39-1, 30 KOs) says he would be open to a fight with Haney (24-0, 14 KOs) if it took place at 140 since it might be a little tough for him right now to make 135.

The 5’6″ Mikey looked considerably smaller than the 5’8″ Haney when the two stood side by side for the face-off. Although Mikey has proven in the past that he’s capable of beating bigger fighters, Haney might have enough youth, skills, and size to defeat him.

Mikey is fighting in two weeks from now against former two-division world champion Jessie Vargas (29-2-2, 11 KOs) in the headliner bout LIVE on DAZN at The Ford Center at The Star, in Frisco, Texas.

The WBC Diamond welterweight title will be on the line, and Mikey feels that the belt will open doors for him to get a title shot. But before those doors are open, Mikey still needs to beat the much bigger 5’11”, who will have a whopping five-inch height advantage over him. At this point in Vargas’ career, he’s a junior middleweight.

Without a rehydration clause, Vargas could have too much of a weight advantage over Mikey for him to win.

“I’ve seen him before. I know he’s a true fighter,” said Mikey to AB Boxing News about Devin Haney. “We had a little face-off here. I thought that was only for a picture. I’ll have to match-up in the future at 140. I don’t think I would be able to do 135 right away, but if I come down to 140, I can give a better adjustment or assessment of 135 possibly.

“But if 140 is the weight class, then hell yeah, why not? I’m open to fighting anybody, and he wants to challenge everybody. I think that would be a good match-up. And I think the fans would really love something like that. I like that because I got a lot of options. It means I have more fights and more options. I like it, and it’s good business too.,” said Mikey.

Haney would be a fight for Mikey, as would Gervonta ‘Tank Davis, Ryan Garcia, and Teofimo Lopez. That three-fight at 135, but they would likely be willing to come up in weight to fight Mikey for the payday. Ryan Garcia would be an excellent fight for Mikey. Fans would get a chance to see how well Ryan deals with a fighter with a left hook the equal of his own.

Mikey has an excellent left hook and straight hand. Would Ryan be able to stand up to Mikey’s power for the full 12 rounds without tasting his first career defeat? The bigger question is would Golden Boy let Ryan face Mikey?

It might be a good idea for Mikey and Haney to face each other. If Mikey loses to Vargas, then he’s probably going to need to move back down to 140 at the least. Haney would be a better option for Mikey than for him to challenge some of the light welterweight champions.

“We’re excited about the fight itself. Now we’ve talked to the WBC, and they’ve presented us with the WBC Diamond belt. That opens up doors for great fights,” said Mikey Garcia.

“That’s what that does. That’s an honorary belt, and a lot of people don’t know what it means and what it does,” said Mikey in talking about WBC Diamond title. What it does is it opens up doors for bigger fights, and to challenge some of the world title fights.

“My fight, whether it’s for a belt or not, it’s just as important,” said Garcia. “Obviously, the WBC has been supporting me, and I support the WBC. They’ve done so much for boxing, and they’re always helping the fighters. I’m grateful they’re also supporting our fight.

“I just want to make sure I win this fight, and it opens doors for bigger fights,” said Mikey.

Winning the WBC Diamond welterweight title might help Mikey get a rematch with IBF/WBC champion Errol Spence Jr., but there’s probably no interest from fans in seeing a second fight between them.

The fight that Matchroom Boxing USA Eddie Hearn wants to see Mikey in is against WBA champion Manny Pacquiao in April or May. That would be a big fight for Mikey, and it’s one that can be made. Mikey is on Pacquiao’s shortlist of potential opponents for his next fight.

Mikey Garcia pleased with his undercard for Feb.29

“It’s a great card. And it’s probably going to be one of the best for the year, but it’s already the best for this year. It’s an honor to do a show like this with so many great fights. That’s what boxing needs to be doing. In the olden days, they used to do that where you had a lot of champions fighting on a card.

“Business has kind of shifted a little bit where it’s one guy on the card, and the undercard not really anybody,” Garcia said. “This is more about what the fans want to see. Every fight is a world championship level fight where you’re going to have solid fights that you’re really going to enjoy,” said Mikey.

The undercard for the Garcia vs Vargas card is stacked with excellent fighters, if not great fights.

Here are some of the interesting names on the cards:

The undercard has one good competitive fight between Yafai and Chocolatito Gonzalez, but the rest of the fights involving name guys are largely mismatches. There’s a lot of talent on the card though. 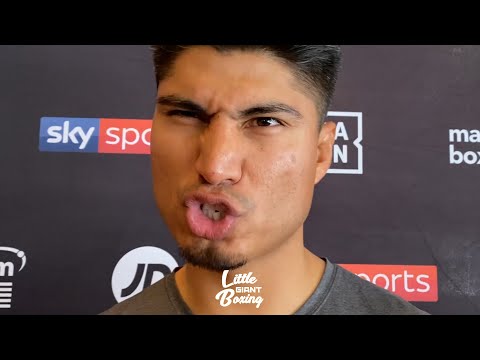