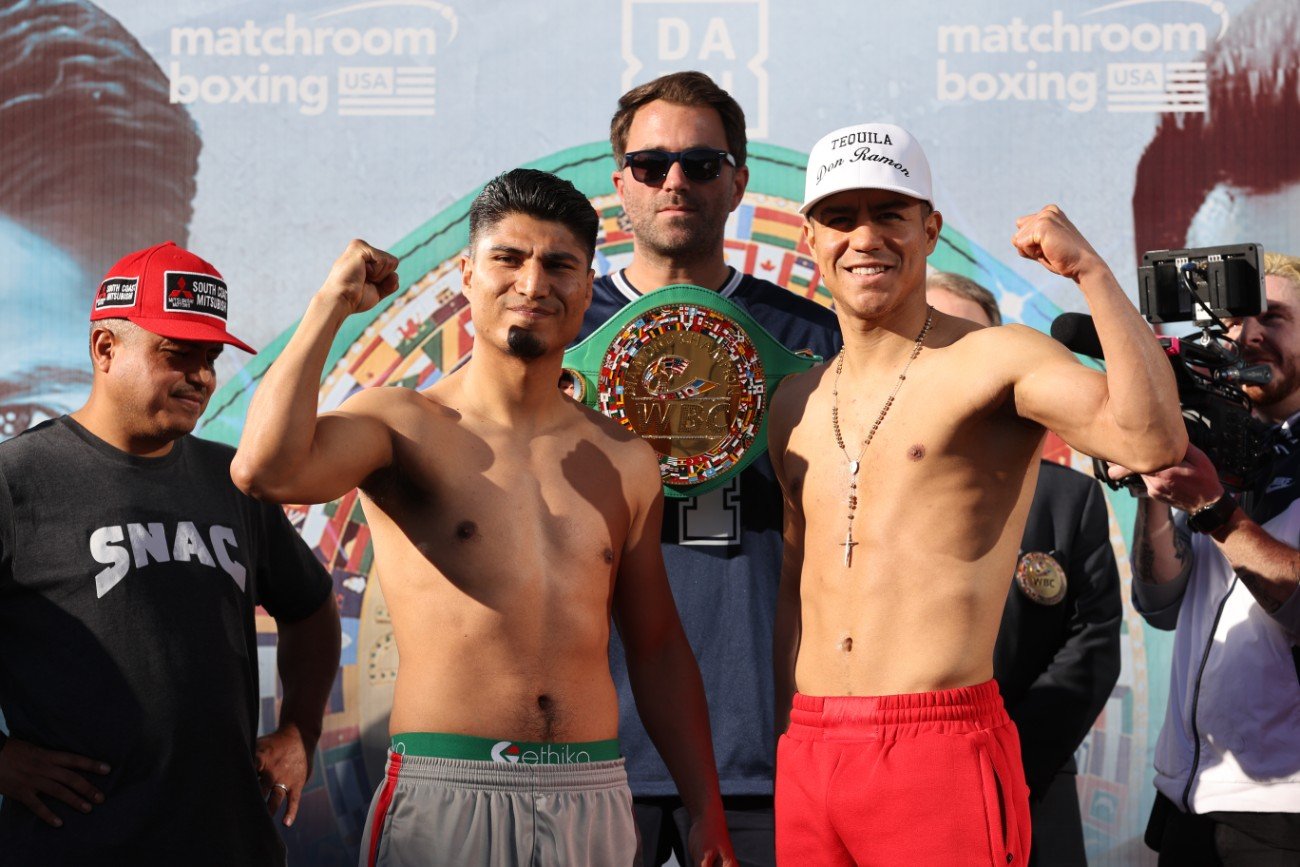 By Kenneth Friedman: Mikey Garcia weighed in at 145 3/4 lbs on Friday for his fight this Saturday against Jessie Vargas on DAZN at The Star in Frisco, Texas. Vargas (29-2-2, 11 KOs) came in at the welterweight limit at 147 lbs. Both guys looked lean and in top shape for their clash tomorrow night.

Mikey looked a little fat around the midsection. This is the same problem Mikey had in his previous fight at 147 against Errol Spence. Mikey has fat on him that shouldn’t be there. In contrast, Vargas looked in great shape and is trim.

This is the fight where the former 4 division world champion Garcia (39-1, 30 KOs) shows whether he is cut out to fight 147. He wants to prove his doubters wrong after his first fight at welterweight against Errol Spence 11 months ago turned out to be a disaster in losing a 12 round decision.

For that fight, Mikey had moved up two weight classes from lightweight to welterweight with hopes of winning his 5th division world title. Mikey just didn’t have the size, speed or power to compete with Spence, and he was embarrassed by him losing every round of the fight. The lopsided scores – 120-107, 120-108 and 120-108 – reflected how much of a mismatch the fight was.

Garcia vs. Vargas will end in a knockout – Hearn

“You’ve got a guy that has world champions up to 140 and wants to win a world championship at 147. Jessie Vargas was a world champion at 147. They’re both of Mexican heritage. It’s going to be an absolute war! It’s got Barrera-Morales written all over it again. I really think you’re going to get that kind of fight.

“They’re so skilled, both of them,” Hearn said of Vargas and Mikey. “I’ve never seen Jessie so motivated for a fight. So I think it’s going to be a brilliant fight. Maybe 147 just isn’t or him [Mikey]. Do you know how many people have been calling me and telling me recently, ‘Jessie Vargas is going to win this fight.’

“No, I don’t,” said Hearn when asked if he sees the Mikey vs. Vargas fight going the distance. “They’ll both be too active. I think they’ll both be throwing a lot of shots, and I know Mikey punches hard. We know he probably doesn’t punch as hard at welterweight as he did down at lightweight and super featherweight. Both guys will engage, and both guys will trade. I think it’ll go late,” said Hearn.

This is a good fight. As Matchroom Boxing promoter Eddie Hearn says, even with the 32-year-old Gonzalez at 70% of what he once was, it may be more than enough for him to get the victory. The winner of the Yafai vs. Gonzalez fight could be facing WBC 115-lb champion Juan Francisco Estrada next in a unification fight. Yafai (26-0, 15 KOs) says his goal is to “END” Gonzalez’s career on Saturday.

“This is a guy that I idolize, but he’s trying to take away everything that I want,” said Yafai to Matchroom Boxing on Roman Gonzalez. “So now I’m focusing on basically finishing his career. I’m preparing for the Chocolatito that fought Carlos Cuadras [in 2016]. I’m expecting him at his best, and I plan on using my speed and technical ability and use my physical strength and the power I’ve shown,” said Yafai.

Kal Yafai: I won’t get credit for beating Chocolatito

“I’m on a platform now and fighting one of the biggest names in the lower divisions. And I’m going to show the world what I’m capable of doing. I’m the kind of guy that needs to be motivated.

“I need that fear. When I won the world title, I was the underdog in that one, and I completely took him to school. That’s what I need. I need pressure. I thrive on that pressure. I’ll do how I feel when I get in there. I can box. People can see me box on the back foot, and counter well.

“I’ve got to use my attributes, my speed, and my technical ability. Also, my physical strength, which goes unnoticed. I’m a big guy in there, and I’ll be a lot bigger on the night. I don’t care what people think or what they say. I’m in there to do what I’m going to do.

“I know if I go out there and demolish Chcolatito in 3 or 4 rounds or win on points, people will go, ‘Oh, he’s washed,'” said Yafai. “I know that, but it doesn’t bother me. My bank balance will be lovely, and I got a Hall of Famer on my record, and I’ll move on to a massive unification [against Juan Francisco Estrada]. So I don’t give a s—,” said Yafai.

The 25-year-old Martinez is a fighter that Hearn is excited about, as he sees him as a future star. Martinez looked great in stopping former WBC flyweight champion Christofer Rosales by a 9th round knockout on December 20 on the undercard of Danny Jacobs vs. Julio Cesar Chavez Jr. in Phoenix.

Martinez vs. Harris could steal the show on Saturday from the headliner and co-feature bouts. Martinez stole the show on the Jacobs vs. Chavez Jr. card last December, but then again, they had little in the way of competition. That was such a horrendously bad fight. 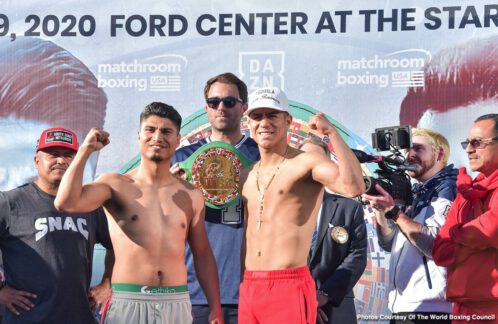 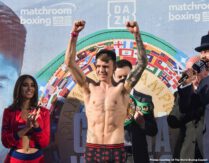 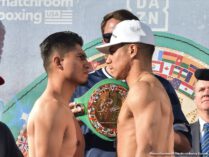 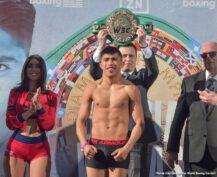 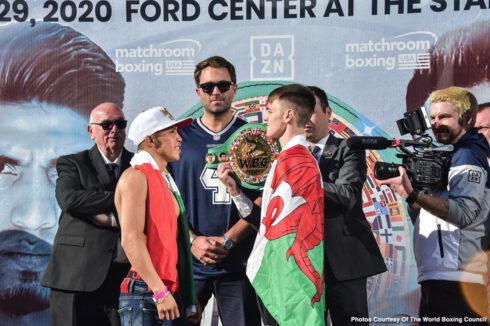 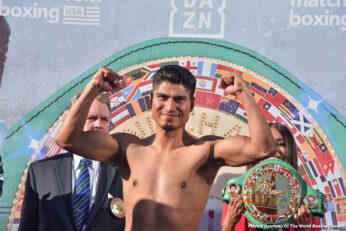 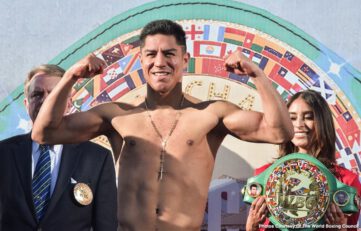