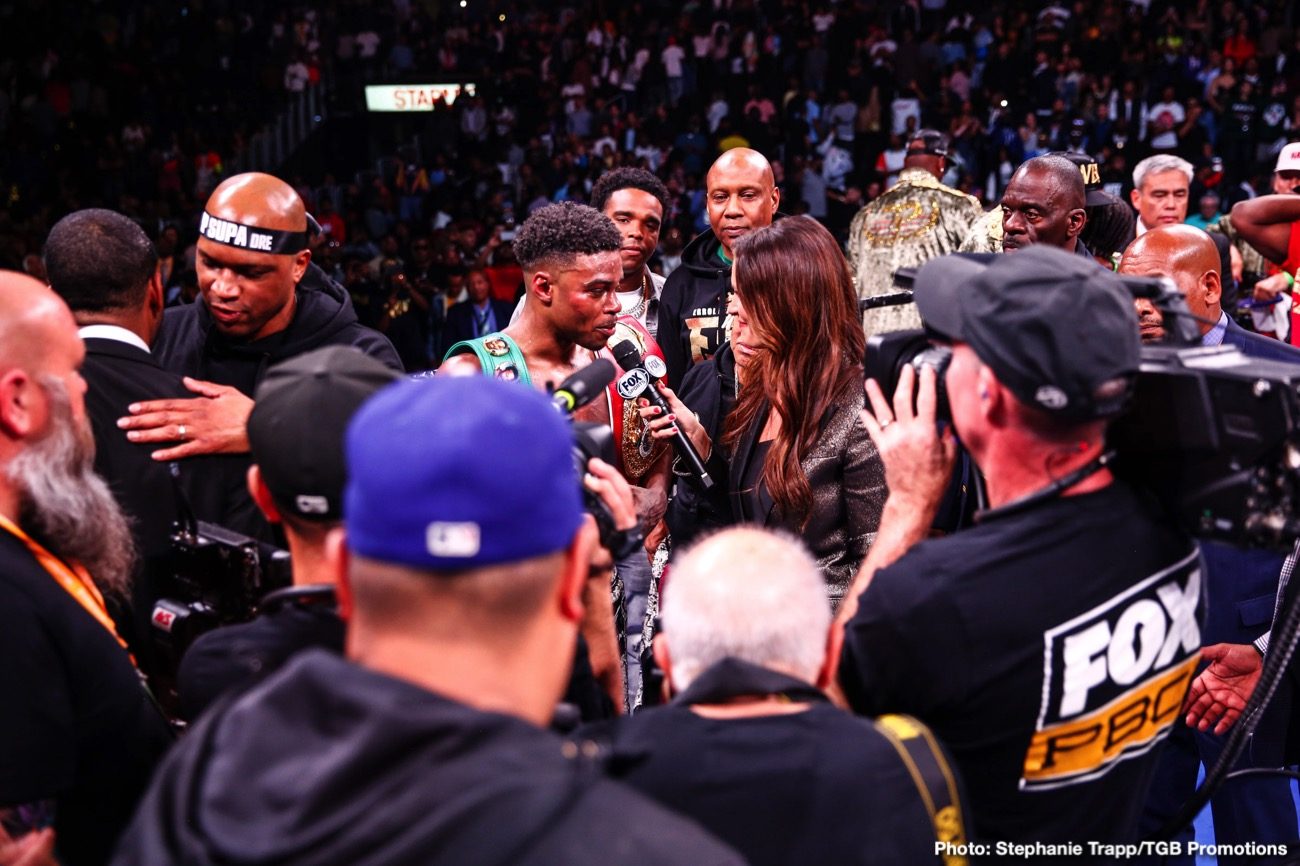 By Charles Brun: Errol Spence Jr. is tired of hearing Kell Brook call him out in the media, and he wants him to leave him alone already. Brook (38-2, 26 KOs) hasn’t 14 months, and he expects Spence (26-0, 22 KOs) to just give him a crack at his IBF & WBC welterweight titles if he beats his comeback opponent Mark DeLuca (24-1, 13 KOs) this Saturday night on February 8 at the Sheffield Arena in Sheffield, England.

Brook looked badly emaciated on Thursday, and he’s clear that he’s probably not going to be able to ever get back down to 147 again. His fight with DeLuca this Saturday is at 154. For Brook to look this drained in getting down to 154, it’s a bad sign.

Spence doesn’t feel the same way. He wants Brook, 33, to pipe down, and back off with his name dropping and calling him out night and day. Brook had his chance to beat Spence in 2017, but he quit on one knee in the 11th round in Sheffield.

That was Brook’s chance to defeat Spence, but he failed to do the job. The broken eye socket Brook suffered in that fight with Spence didn’t help his case, but he still lost. That’s all Spence is focusing on.

Spence wants Brook to stop calling him out

So there it is. Spence is telling Brook to “Leave me tf alone, dude.” It would help Brook if he actually captured a world title BEFORE calling out Spence instead of doing it the other way around. The way that Brook is doing it now, he seems desperate, needy and looking for a cash out in the same way he’s perceived to be doing with him attempts at getting a fight against Amir Khan.

Spence, 29, gains nothing from fighting Brook right now, as he’s not a marketable fighter in the United States. If Spence set up a fight against Brook right now, he wouldn’t be able to sell it on Fox Sports pay-per-view like he did with his last two matches against Shawn Porter and Mikey Garcia.

When Spence does return from his car crash from last October, he’s going to want a solid welterweight that’s active, and popular. Brook isn’t a welterweight, he’s not active, and he’s not popular, at least not in the U.S.

If Brook does want a rematch with Spence, he needs to win a world title at 154 against someone like Jermell Charlo or Jeison Rosario. Getting those fights won’t be easy for Brook, but his promoter Eddie Hearn might be able to work his magic.

Brook’s career hasn’t been the same since he suffered a broken eye socket in his 5th round TKO loss to IBF/WBC middleweight champion Gennadiy ‘GGG’ Golovkin in September 2016. It was a bad move on Brook’s part to fight GGG, as he’d never fought at 160 before, and he’d never even competed at 154.

When Brook did come back from the injury eight months later, he was stopped by Spence in the 11th round. In that fight, Brook suffered another broken eye socket, but to the opposite eye as the first one. Call it back luck or whatever. The fact is Brook’s eyes have been giving him problems when he’s faced the best.

Even with the losses to Golovkin and Spence, Brook could have righted the course of his career if he’d been active. He’s taken a lot of time off between each of his last 3 fights, and that’s resulted in him looking progressively worse. The inactivity has undermined Brook, as he would be in a better position today if he’d kept busy.

Brook says he doesn’t really need to fight ever again, which sounds like he’s financially set after his big paydays against Golovkin and Spence.  That might explain why Brook hasn’t been in a hurry to fight for the last four years. He’s made enough money to where he doesn’t need to fight often anymore.

“I’ve for the fire in my belly like I never had before,” said an emaciated looking Brook to secondsout. “I’m going to be a two-time world champion this year. Whoever has got the belt around me,” said Brook when asked which world champion at 154 he’s targeting.

Maybe Brook would beat Spence? Who knows? But since Spence isn’t going to give him a chance due to him no longer being relevant, he will never know if he could. Brook should stay busy with his career, and lean on his promoter Hearn to get him a title shot at 154.

Hearn can probably offer IBF/WBA junior middleweight champion Jeison Rosario (24-1-1, 14 KOs) a bunch of money to defend against Brook in the UK. If not Rosario, then Hearn should go after WBO 154-kb champion Patrick Teixeira. That’s a beatable champion.

Brook should forget about Amir Khan. That fight isn’t happening.

Brook says Crawford the only one that can test him

“I don’t know what the car crash has done to him,” Brook said about Spence. “He looks like he’s training again, so we have to see. People are going to think, ‘What’s Kell on about? How can he be a better fighter now?’ People are going to actually see that.

“I feel like I’ve matured, and I know what I want. And I feel like before, I feel like I’m in great shape and it’s my destiny to become world champion again,” said Brook.

No one,” said Brook when asked if there’s anyone at 147 that can test him like Spence or Amir Khan. “Nobody. I think someone who can test me is Crawford. I never really watched him, but I did watch a bit of him, and he is very good.

“Get rid of Deluca, and then we start. Manny Pacquiao. It would be awesome [to fight Pacquiao]. There’s some great dancing partners out there,” said Brook.

Hearn can probably easily setup a fight between Brook and WBO welterweight champion Terence Crawford. Top Rank wants to match Crawford against Spence in 2020, but that doesn’t look like it’s going to happen. There’s no one else that Top Rank has that the boxing public cares about to fight Crawford, so they might as well get Brook.

Hearn: Canelo’s team have had “minor conversations’ on Saunders and Callum fights »