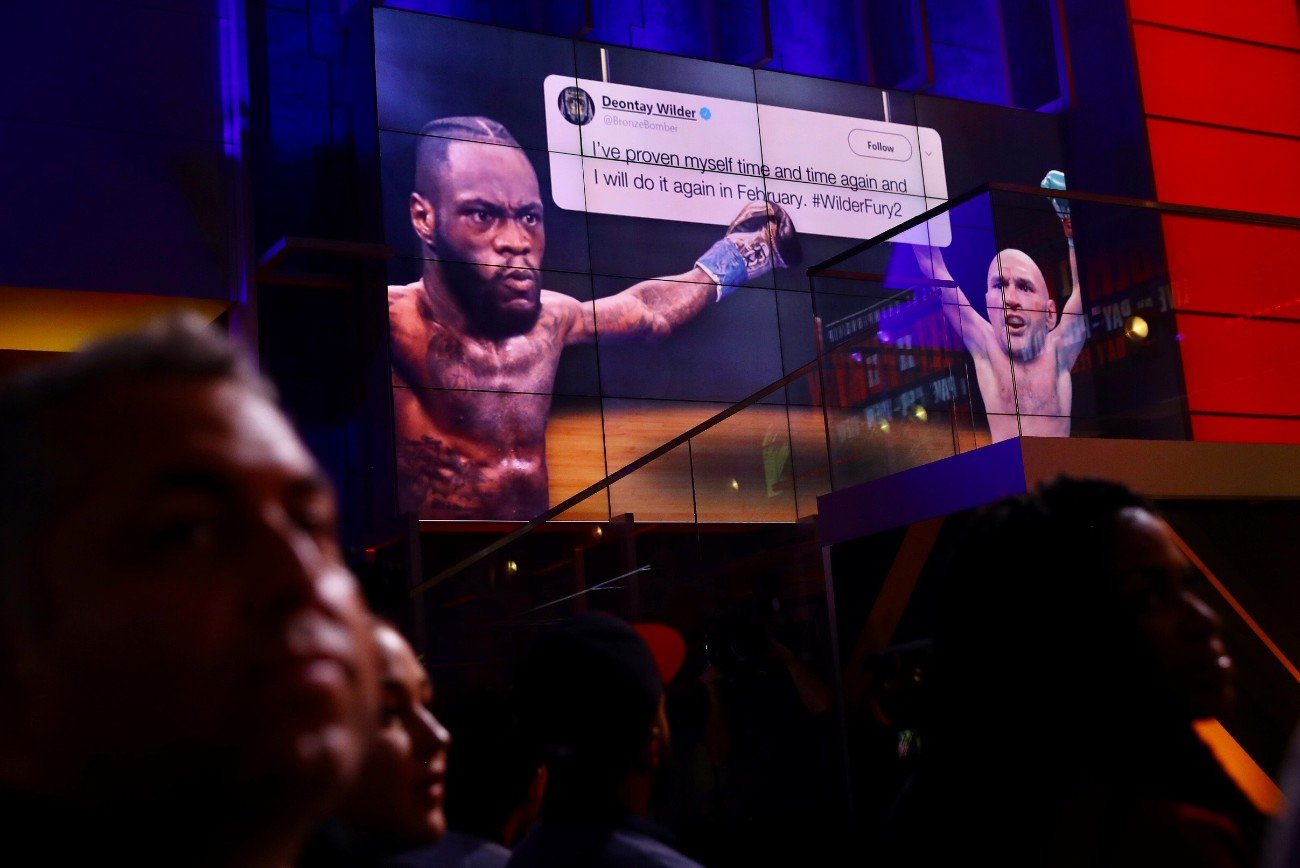 By Scott Gilfoid: Tyson Fury’s former trainer Ben Davison thinks he’s got a great shot at knocking out WBC heavyweight champion Deontay Wilder this time if he takes advantage of the flaws that ‘The Bronze Bomber’ presents.

Wilder (42-0-1, 41 KOs) will be defending his WBC belt against lineal champion Fury (29-0-1, 20 KOs) on February 22 on ESPN and Fox pay-per-view at the MGM Grand in Las Vegas, Nevada. The loser of the rematch will have the option to execute a third fight for later this year if they wish.

Davison has watched the Wilder-Fury 1 fight, and he says he sees areas where Fury can take advantage of Wilder to land his power shots. However, for Fury to land those shots, he’ll need to step into Wilder’s power alley and risk getting knocked out again.

Fury is counting on Wilder saying, ‘No mas,’ and walking away into the sunset to let him move on to face IBF/WBA/WBO champion Anthony Joshua. Wilder doesn’t care. He’s open to facing Fury a third time before he looks to take care of business against Joshua, if he’s still a world champion by then.

Fury didn’t show much offense in the first fight Wilder, and it’s understandable why. He was giving ground each time Wilder would come forward looking to land his right hand. Fury looked afraid, and his offensive was basically a half-hearted jab that he threw into the air to keep Wilder from coming forward.

Davison wants Fury to be more aggressive in the rematch, and to go on the attack against Wilder, which could be a huge mistake on his part. This could be a mistake for Fury, because it means Wilder will have more opportunities to bounce his right hands off his head. Fury showed in the first fight that he couldn’t handle Wilder’s power, and that probably won’t change in the rematch.

You hate to say it but Fury’s punch resistance might not be as good as it was in their previous fight. I mean, Fury was knocked out cold in the 12th, wasn’t he? Coming back from that knockout, Fury might not be the same guy he was in the first fight. He’s definitely now showing the same fire in his words that he had last time, and you have to wonder if Wilder knocked that out of him.

Davison: Fury can catch Wilder with a left hook like Leonard did to Hearns

Davison believes that the lanky 6’9′ Fury needs to get in close, duck down and nail Wilder with a big peach of a left hook in the fight. That’s easier said than done. Fury will put himself at the mercy of Wilder’s right hand if he follows the plans that Davison has for him, which appears that he got from watching Sugar Ray Leonard’s fight with Thomas Hearns.

“What I saw that is definitely an opportunity exploit is when Wilder goes into the full guard, and Tyson throws a one-two, Wilder snatches back with a left hook, but it’s very high,” said Davison to BT Sport. “If Tyson can throw the one-two, sit [crouch down] and come up with almost a lifting left hook, because almost every time Wilder throws his left hook, this [right hand] comes here [to the side].

“It leaves a massive gap here [straight up the middle],” said Davison. “So after Tyson throws this, and sits. A half second he comes up with a lifting left hook in the way that Sugar Ray Leonard did against Thomas Hearns.

With all the shots that Hearns hit Leonard with in that fight, Fury won’t last long if the rematch with Wilder plays out similar to Leonard-Hearns 1. Hearns was a good puncher, but he didn’t possess the same one-punch power that Wilder has.

Davison thinks Fury can nail Wilder with a left hook in the same way that Leonard did against Hearns in their first fight in September 1981. Leonard (36-3-1, 25 KOs) was trailing on all 3 of the judges’ scorecards going into the 14th round when he stopped the tired Hearns.

“Every time Wilder throws this left hook, this comes here and it leaves a massive gap here,” said Davison. “First of all what Tyson has done is jab to Wilder’s glove, which has occupied Wilder’s glove. The more you keep his right hand occupied, the safer it’ll be or Fury.

“He’ll have to be thinking defensive-minded, and the hand position,” said Davison. “Wilder will have to throw his right hand from his chest to his hip. As you know, when you’re going to throw a right hand, you’re not going to throw it from above your head. The main thing here is Tyson taking the distance away from Wilder.

“Maintaining the distance, keeping the gap, and making sure he falls short,” said Davison on Fury staying on the outside against Wilder. “When Tyson has space behind him, he can’t take distance away. When he can’t, Wilder falls in and smothers his own work, because he’s trying to punch through the target, and force things.

NEWS:   WBC president to give Tyson Fury 2 weeks to confirm retirement until Aug.26th

“Keeping him turning as well, and the footwork of Tyson obviously is vital for him, because to have the feet and always be a step ahead is a massive favor for him in the fight.

What Davison says about Fury keeping the distance from Wilder to keep him from throwing his right hand is a useless plan. What Davison doesn’t point out is when Fury was keeping his distance, he wasn’t landing anything either. Fury was killing the clock in each round by staying out of range, and doing nothing but using feints, and angering the crowd at the Staples Center.

It sounds great what Davison says with him talking X’s and O’s about Fury knocking out Wilder on February 22 using his game plan, but it’s far-fetched. Fury CAN’T punch, and even if he lands that left hook that Davison believes will KO Wilder, it won’t have enough mustard on it to even get his attention. If anything, Fury could wind up getting knocked out quicker if he wakes up the sleeping giant Wilder.

What Fury did in the first fight, holding and running, might be about as good as it gets for him. Fury isn’t gifted in the power department unfortunately, and to ask him to even try and punch it out with Wilder is asking for trouble.

The end result of Fury stirring up Wilder by hitting him with a left hook, it could be altogether bad. Davison is basically asking Fury to walk up to a giant beehive and start stirring it up to see what happens. You don’t want to do that, believe me. As such, Fury should spoil like he did last time he fought Wilder, and hope that the judges give him the decision.