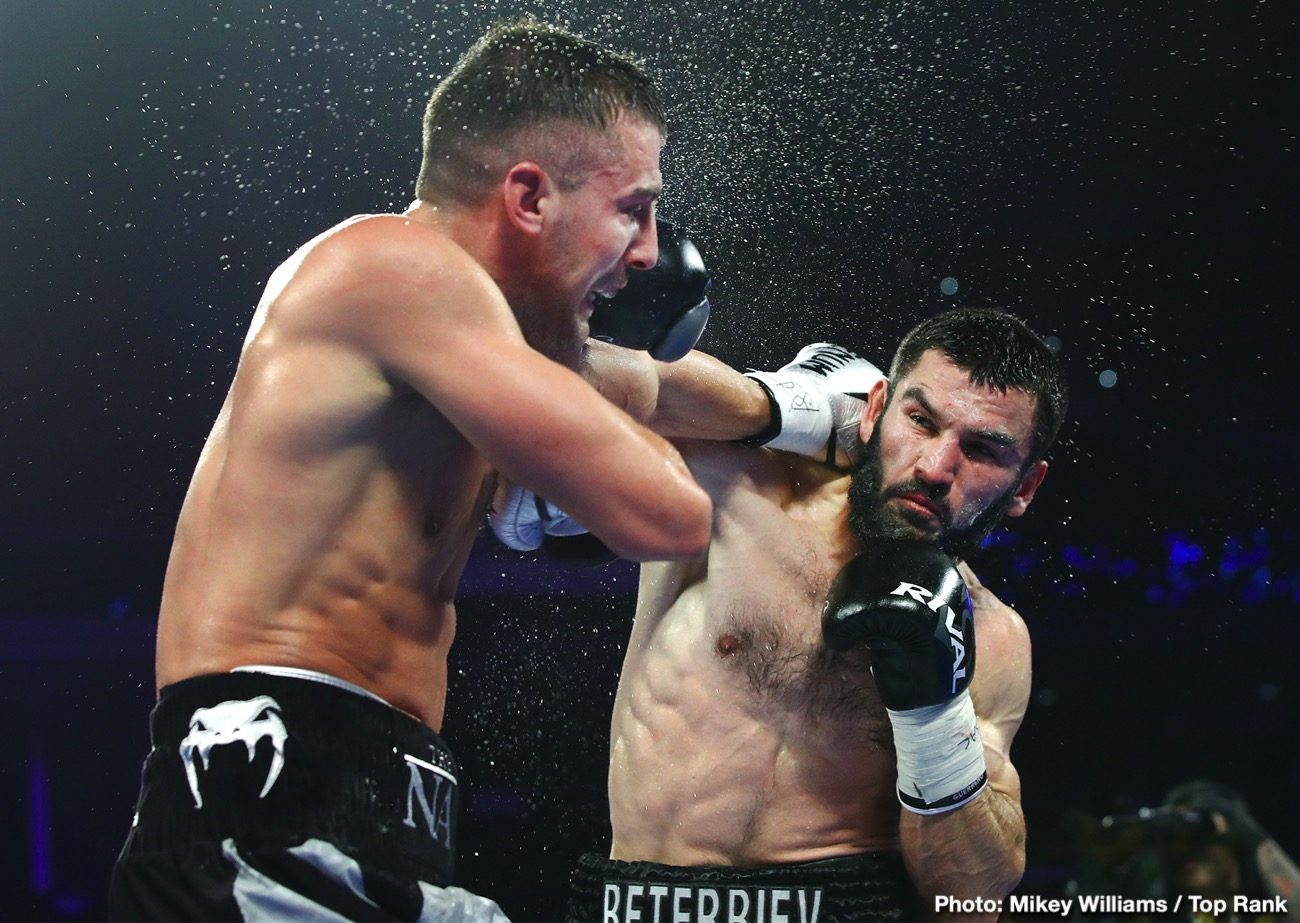 Beterbiev-Bivol is an amazing fight on paper. The two-time Russian Olympian Beterbiev has knocked out everyone faced, and he’s coming off of a 10th round knockout of previously unbeaten WBC light heavyweight champion Oleksandr Gvozdyk (17-1, 14 KOs) on October 18 in Philadelphia.

Bivol is looked good against some of the old timers at 175, but he hasn’t faced any of the elite level talents in the divsion yet. Joe Smith Jr. rung Bivol’s bell in the 10th round in their fight last year in March, and that was by far the best guy that he’s faced.

The winner of the Beterbiev vs. Bivol fight will be seen by fans as the #1 guy at 175. From there, the winner may need to try and pull some of the 168-lb fighters to come up to 175 to face them.

Beterbiev vs. Bivol targeted for August in St. Petersburg, Russia

The 2012 Olympic bronze medalist Gvozdyk is a fighter that would be a tough fight for Bivol. That would be a 50-50 fight. A fight between between those two would be an ideal eliminator level fight to get to a match against Beterbiev, who clearly is considered the #1 fighter at 175.

Canelo Alvarez recently inserted himself into the light heavyweight equation by defeating WBO light heavyweight champion Sergey Kovalev last November. But the Mexican star Canelo vacated his WBO title at light speed rather than test himself against Beterbiev or Bivol.

It was a weak move on Canelo’s part, but then again so was his decision to face Kovalev rather than Beterbiev. It was a huge sign of respect for Beterbiev that Canelo vacated his WBO title instead of taking him on in a unification fight.

Right now, you’d have to favor Beterbiev to defeat Bivol just based on his power advantage, and his boxing skills. Bivol is a pure boxer without much power to speak of.

Beterbiev’s promoter Bob Arum wants to put together the fight with Bivol’s promoter Eddie Hearn of Matchroom Boxing for August. If the Beterbiev-Bivol fight does get made, it’s expected to take place at the Gazprom Arena in St. Petersburg, Russia.  The Boxing Federation of Russia wants to have the unification match take place there.

Bivol, 29, has to win his interim fight in April. He still doesn’t have an opponent yet, but Hearn is keen on matching him against Badou Jack or Gilberto ‘Zurdo’ Ramirez.

Arum promotes Ramirez, and might not like the idea of having him take part in a risky fight that he doesn’t have a great shot at winning against Bivol. It’s safe to say that Ramirez’s chances of fighting Bivol are poor.

“We know about the desire to fight Bivol. He will have priority and we can organize such a fight in 2020,” said Arum to tass.ru on Beterbiev being interested in facing Dmitry after he defends against Fanlong on March 28.

That’s a great fight between Beterbiev and Bivol. As long as both guys win their interim fights, they should be fine. If Bivol takes the fight against Badou Jack (22-2-3, 13 KOs) in April, there’s no guarantee that he wins that. Jack is an incredibly talented fighter, who fought well enough to deserve wins in his recent fights against Adonis Stevenson, Jean Pascal and James DeGale.

Jack could have easily won all three of those fights with different judges working. It’s plain bad luck on Jack’s part. With Badou’s pressure style of fighting, he could walk Bivol down, and beat him like he did Anthony Dirrell and Nathan Cleverly.

“I believe in my boxing skills. Beterbiev has good power. If you fight Beterbiev, you almost have no chance,” said Bivol to Little Giant Boxing.

It goes without saying that Bivol needs to up the level of opposition that he’s facing, as he’s wasting his career fighting no name guys and fringe contender. Dmitry is coming off of a 12 round unanimous decision victory over fringe contender Lenin Castillo ( 20-3-1, 15 KOs) on October 12 in Chicago.

It’s Hearn that is putting the fights together for Bivol. The British promoter should have already matched Bivol against Callum Smith, Joshua Buatsi or Billy Joe Saunders by now. Hearn promotes those three British fighters, and he could easily make that fight if he wanted to.

The Bivol vs. Castillo fight was shown on DAZN, and the boxing public in the U.S wasn’t excited in the least with that match-up. Bivol won by the scores 119-108, 119-108, 120-107. The fight was about as interesting to watch as paint drying. Hearn is doing Bivol no favors in having him defend against the likes of Castillo.

It would be a disappointment for a lot of U.S boxing fans if the Beterbiev vs. Bivol fight takes place outside of the United States, as they won’t be able to see it live and in person. Beterbiev-Bivol would be a great fight for New York or Las Vegas. If those two fighters want to expand their fan base in the U.S, then staging their unification fight in American makes a lot of sense.