Tyson Fury: ‘Wilder would knock Joshua out in 2 rounds’ 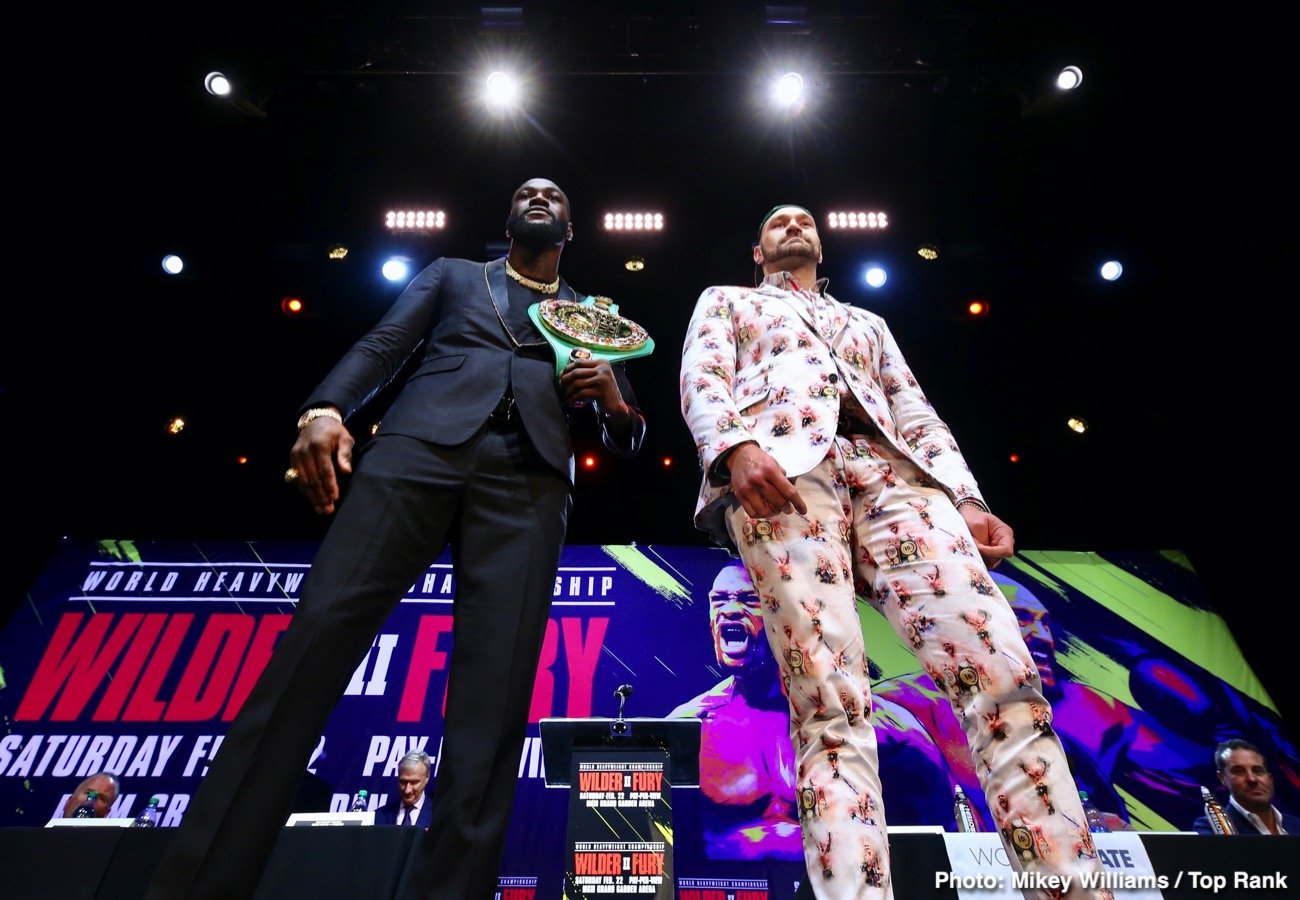 By Charles Brun: Tyson Fury doesn’t see any way that Anthony Joshua could beat WBC heavyweight champion Deontay Wilder if he meets up with him in the future. Indeed, Fury say Joshua’s fighting style is absolutely “tailor-made” for the the 6’7″ Wilder (42-0-1, 41 KOs) with his one-punch power.

The tricks that Joshua (23-1, 21 KOs) used to defeat the out horribly overweight 283-pound Andy Ruiz Jr. in their rematch last December would be ineffective against Wilder.

Wilder = a real problem for Fury on Feb.22

Fury (29-0-1, 20 KOs), not Johua, is the one in the crosshairs of Wilder, as the two will be meeting in their long awaited rematch next month on the 22nd of February at the MGM Grand in Las Vegas, Nevada. Wilder wanted a rematch with Fury in 2019, but his promoters at Top Rank vetoed that idea, electing to let the fight marinate 14 months before letting them fight again.

Whether that was a smart move on their part remains to be seen. It might mean a little more money for the fighters, but it likely won’t improve Fury’s chances of winning the fight. He couldn’t handle Wilder’s power in 2018, and that’s not something that is expected to change in the second fight. Fury’s career might be over on February 22 if Wilder knocks him cold like he did in their first fight.

Joshua is too easy to hit, and his ability to take hard shots without getting hurt isn’t what it needs to be fore him to handle the right-hand power of Wilder.

“I think Wilder would knock Joshua out in two rounds, and that’s not being critical of Joshua,” said Fury to TheMacLife in predicting a stoppage win for Deontay over AJ. “I think he’s tailor-made for Wilder. A big, heavy load marching forward. I don’t think it was a great performance, to be fair,” said Fury on Joshua’s win over Andy Ruiz Jr. on December 7 in Saudi Arabia.

“He stuck and moved, but every time he planted his feet for one second, he was like Bambi on ice, and that was with Ruiz coming in at 21 stone or whatever he was,” said Fury in criticizing Joshua’s performance. “He [Ruiz] was as fat as a pig. That few million quid that he got, the $7 million dollars, it went to his belly.

“I just think that when you’ve never had any money in your life, and when you get $7 million or $8 million dollars, you may as well have won the Euromillions and you may as well be a billionaire,” said Fury.

“So you do all the things you didn’t do before. People say it’s hard to go back to the gym, and hard to sweat in an old stinky boxing gym, when you’ve got 7 million quid, and you’re driving a Rolls Royce and you’re living the dream,” Fury said. You’re eating sushi on a naked women and all that. So yeah, it is hard, and I perfectly understand where he comes from.”

From what Fury has seen of Joshua in his last 2 fights with Ruiz, he has no confidence in his ability to defeat Wilder when/if the two of them meet in the future.

“Because it didn’t work so well, did it? because I got a draw,” said Fury about why he’s going to change his fighting style for Wilder rematch. “I see a draw as a failure, and I don’t want to fail again. It doesn’t matter if he’s in a different space or not. He’ll be in space after I land the big right hand on his chin in the rematch. He’ll definitely be in space then,” Fury said about Wilder.

“So I’ve got three fights left on this contract. Wilder, Joshua and whoever else the third one will be,” Fury said. “I don’t know. Whether it’s Whyte, whoever it may be. It’s not really a concern. That will be my fight contract done. We’ll find out, and we’ll see what the fight offer. And we’ll see if it’s worth it. We’ll see if there’s anything more for us to do, and we’ll see.

It’s pretty interesting that Fury is already starting to go back on his 3-fight retirement plan that he revealed this week. On Saturday, Fury said he would be retiring after he finished the following three fights: Wilder, Joshua and Dillian Whyte. Now Fury whistling a different tune, and he’s talking about possibly ontining. He’s not sure if he’ll retire, but he is thinking of taking a five-year break from boxing. It’ll depend on what contract offer he’s given.

“If he got $7-8 million for the first fight, and $15 million for the rematch, he doesn’t care, does he?” said Fury in talking about Ruiz. “I remember watching an interview where Ruiz said he was struggling to put nappies on his children’s a—, and that’s a tough place to be in. Then all of a sudden to be driving Rolls Royces, and eating and going everywhere and doing everything you ever dreamed of, that’s a success story, and a very big success.

“I have to congratulate him, because not many men can change their styles, and through boxing and through sport, you can and it’s been proved there,” continued Fury on Ruiz. “So fair play to him. He’s got what he got out of the system in boxing, and that’s it.

“Fair play, he’s earned every penny, and I do think he’ll come back stronger,” said Fury on Ruiz. “Now he’s got money, and he’s probably got more money than he can spend at the moment.

“He should concentrate now in getting back into training, and putting all that partying behind him, and moving forward and having some more good fights,” said Fury in hoping Ruiz will focus on training. “I believe he’s a good little fighter, and I believe he can give anybody in the division a tough fight,” said Fury.

Ruiz’s rags to riches story mirrors that of Fury’s own. After he beat Wladimir Klitschko in 2015, all of a sudden Fury was swimming in dough. But then everything fell apart, as he seemed to lose his way, and didn’t fight for 2 1/2 years. Ruiz has quickly made a small fortune from his 2 fights with Joshua, and it remains to be seen if he’ll be able to find the motivation that he once had.