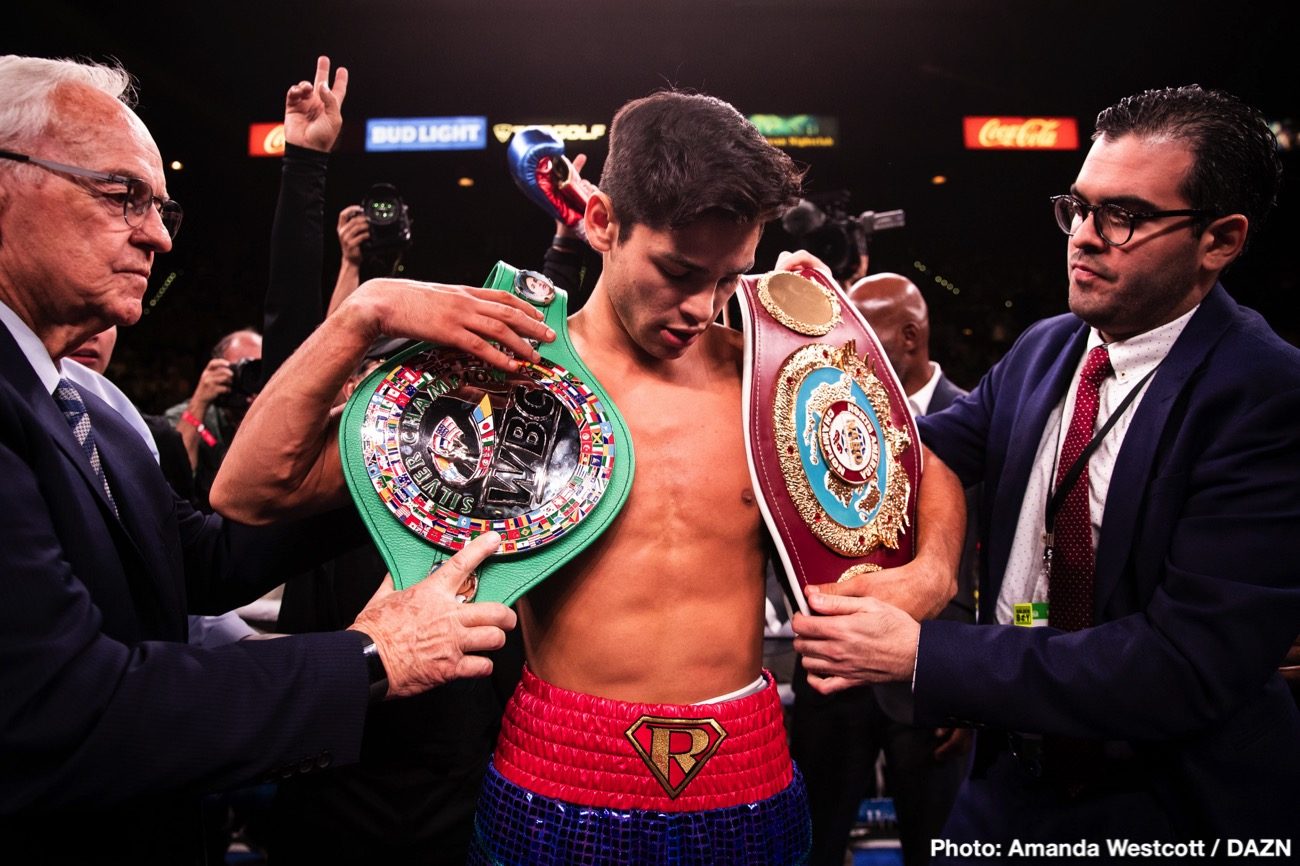 By Aragon Garcia: Undefeated WBC Silver lightweight champion Ryan Garcia has big plans on shocking the boxing world with his accomplishments in 2020 starting with his ambitious move in facing the ring warrior Francisco Fonseca on February 14 at the Honda Center in Anaheim, California. DAZN is streaming the Ryan vs. Fonseca fight in this Golden Boy Promotions card.

This is another hurdle that Garcia will need to leap over to show the world that he’s for real, and ready to beat the best at 135.

Fonseca, 25, is a more than tough fighter with tons of experience from his fights against these gifted fighters:

If the young 21-year-old Garcia gets passed Fonseca (25-2-2, 19 KOs), then he could be looking to take newly crowned WBA ‘regular’ lightweight champion Gervonta ‘Tank’ Davis’ scalp in 2020. Ryan has already called out Tank Davis following his 12th round knockout victory over former featherweight world champion Yuriorkis Gamboa on December 28.

Ryan is also interested in challenging WBC lightweight champion Devin Haney, as soon as he comes back from his shoulder injury. For that fight to take place, Haney (24-0, 15 KOs) will need to be given a clean bill of health by the medical staff, as well as his promoter Eddie Hearn of Matchroom Boxing. Haney, 22, suffered a shoulder injury in his recent November 9th title defense against Alfredo Santiago at the Staples Center in Los Angeles, California.

We all need to get in that ring for boxing 🥊 https://t.co/x4Q5oIYnl7

The talented ‘Kingry’ Garcia (19-0, 16 KOs) has joined with WBC lightweight champion Devin Haney in circling overhead looking to swoop down on Gervonta (23-0, 22 KOs) to take his WBA secondary 135-lb title.

“I’m very excited to be in the ring once again,” said Ryan Garcia. “And I’m looking to shock the world this year. I’m going to show the boxing world that I’m here forever!”

Ryan Garcia coming off of a big year in 2019

In 2019, Ryan defeated Jose Lopez and Romero Duno, and looked sensational in both fights. Garcia surprised a lot of skeptics by knocking out Duno in the 1st round on November 2. In doing so, Ryan showed that he’s got the kind of power to knockout anyone in the 135-lb division.

Ryan’s new trainer Eddy Reynoso has helped take his career to the next level, and now he’s ready to take on the upper level of the division.

Fonseca vows NOT to let his country down against Ryan Garcia

“I will not let my country down,” said the 25-year-old Fonseca. “When I face Ryan Garcia, I will expose him on his own territory. I will deliver him his first professional defeat. We’ve dreamed of fighting Ryan Garcia, and we have the antidote to defeat him.”

Fonseca is a pressure fighter, and if he’s going to win this fight, he’ll need to force an inside war on Garcia. Francisco gave Tank Davis a lot of problems in their fight in August 2018 before losing an 8th round knockout.

Fonseca’s inside game could give Garcia problems

The inside pressure that Fonseca put on Davis was immense, and he hurt him to the body. Fonseca exposed Tank Davis’ poor stamina back then, and he continues to have the same problem now 2 years later. If Fonseca had a little more pop on his punches, he would have had given Tank a run for his money.

“Aside from being a popular young star who is loved by all women, he’s also demonstrated that he’s a skillful fighter with power in both hands,” said Golden Boy Promotions CEO Oscar De La Hoya.

Oscar hasn’t said who is on the target list for Garcia in 2020, but we’re going to see him continue to step up.  With former 3 division world champion Jorge Linares fighting on the Garcia-Fonseca undercard on Feb.14, it’s quite possible he’ll be Ryan’s next opponent.