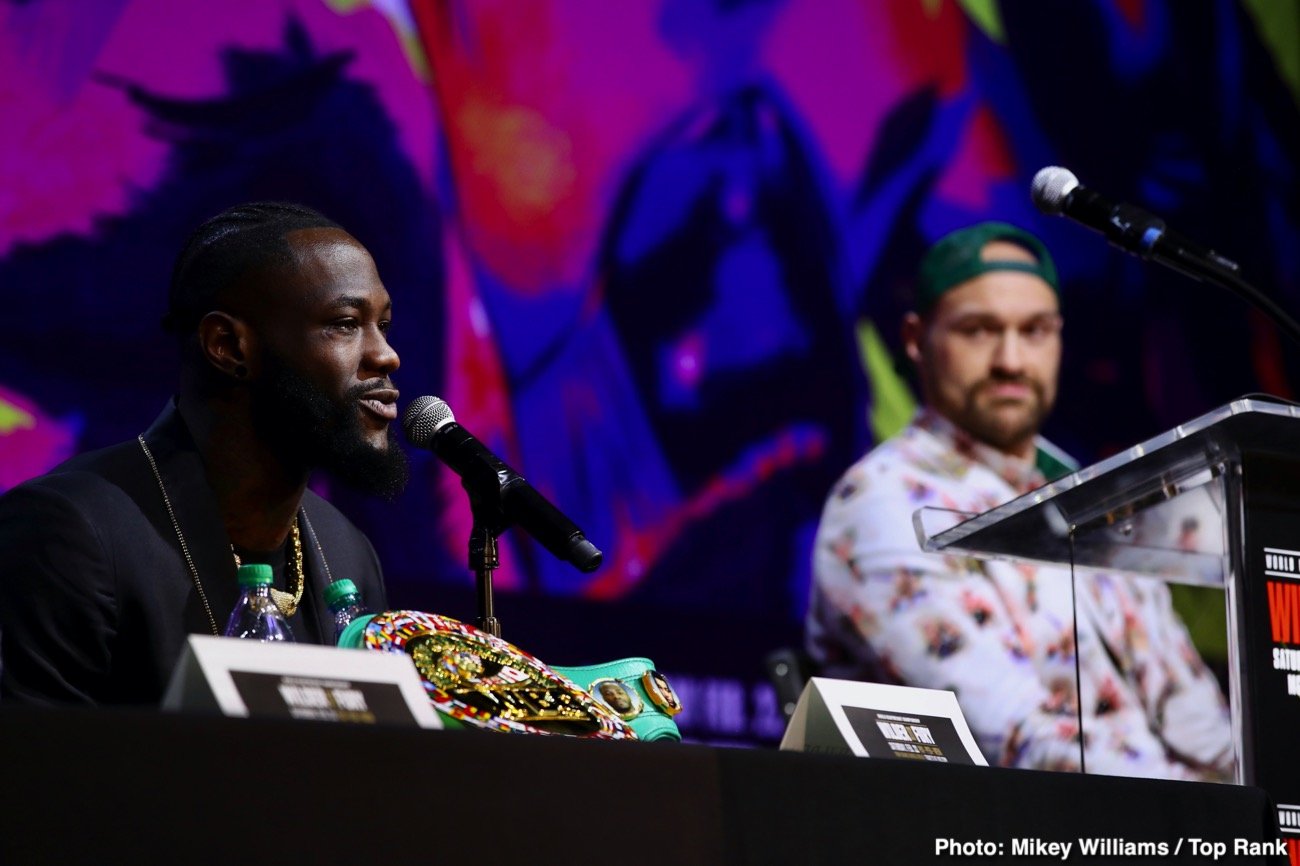 Wilder vs. Fury 2 will be televised on ESPN and Fox Sports pay-per-view on February 22 at the MGM Grand in Las Vegas, Nevada.

Fans not excited about Wilder-Fury 2 rematch

At the recent press conference in Los Angeles, there were a lot of empty seats, and not a lot of cheering for Wilder and Fury. Both guys looked like they weren’t all that excited to be there.

Last December, Fury’s promoter Bob Arum said press conferences weren’t necessary. They were going to use a different strategy to create interest in the fight by selling it during football games.

There are rumors of poor ticket sales or the Wilder-Fury 2 rematch, and there’s not a lot of buzz about the fight. Fury isn’t viewed as the right opponent for Wilder. He needs Anthony Joshua or Andy Ruiz Jr. to create interest from the U.S boxing fans. The 6’9″ Fury, who was knocked unconscious by Wilder in the 12th round of their first fight in December 2018.

It’s debatable whether the lack of press conferences have hurt the Wilder-Fury 2 promotion. You can argue that it obviously doesn’t help not having press conferences, but that might not be the reason why some boxing fans aren’t interested in the fight.

Delaying Wilder vs. Fury 2 rematch was a mistake

Last year, Top Rank signed Fury to their stable, but instead of making the immediate rematch with Wilder while the interest was still high, they let it cool off my putting the British in with 2 soft soft touches in Tom Schwarz and Otto Wallin. That might have been a mistake, because the U.S fans weren’t impressed with those fights.

Common sense would tell you when you have an exciting fight, you immediately want to put those two fighters back in with each other as soon as possible. That’s what promoters normally do. Unfortunately, that’s not what happened with Wilder-Fury.

Top Rank wanted to create interest in the Wilder-Fury 2 rematch by building Fury’s brand by putting him in a couple of showcase fights. It doesn’t appear to have worked though, as Fury struggled in his match with Wallin last September, and was lucky not to have been knocked out. As such, delaying the Wilder vs. Fury rematch was a blunder of major proportions.

The fans have forgotten about the first fight between them, and Fury has done nothing to increase his popularity in the U.S. If anything, Fury hurt it with his fights against little known Schwarz and Wallin. The only delaying the rematch would have worked out is if Top Rank had put Fury in with a live body like Andy Ruiz Jr. or Anthony Joshua. They weren’t going to do that because Fury would probably lose to both of those guys.

When the Wilder-Fury rematch was first announced, Fury’s promoter’s Bob Arum of Top Rank shocked the media by saying that press conferences weren’t needed at all, because they were going to have both fighters advertize the rematch during the college and NFL football games. It was seen as a crazy idea by many, as football fans often have no interest at all in boxing. You might as well have been advertising the Wilder vs. Fury 2 rematch during a sewing class. It was a waste of time.

“Both fighters will be at the national championships, which will take place in 10 days,” said Arum said to IFL TV last December in explaining why news conferences not needed for Wilder vs. Fury rematch. “Even better, both fighters will be at the Super Bowl, which will have 90 million people watching just in the United States. So who needs press conferences when you can get that kind of exposure? Now we’re in 40, 60 and even 90 million stratosphere, and you can’t buy that type of exposure,” said Arum. ‘When are you going to have a proper press conference?’ and the answer is never.”

Wilder and Fury looked flat at the LA press conference

“The pressor looked really flat,” said Eddie Hearn to Matchroom Boxing about the first Deontay Wilder vs. Tyson Fury news conference for their February 22 rematch. “Fury, either he didn’t want to be there, or something wasn’t quite right. There was no Bob Arum. I would have been there. There was no energy, you know? Maybe they didn’t want to do it?

“Look, it’s a great fight, it’s an intriguing fight,” said Hearn on the Wilder vs. Fury 2 fight. “I think Fury might try and do what he says. I think he might go out there and try and knock him out. He says he won’t be herky-jerky, but I think he will. I mean, that’s his style,” said Hearn.

“But don’t you feel like, not going a press conference [tour] for that fight was an advantage for Wilder originally,” said Hearn on the Wilder vs. Fury rematch. “But after watching the press conference, I felt it was a big advantage for Wilder, because by the end of it, Wilder might have been thinking, ‘I come across, and I spoke well, and Fury didn’t really want to engage,” said Hearn.

What Hearn says about the Wilder vs. Fury 2 press conference lacking energy is what a lot of people said about it as well. Fury looked like he was half asleep, and Wilder acted as if he was with an old friend. They were too comfortable with each other, and it didn’t look like they had any energy at all. Both guys looked like they needed a cup of coffee to wake up, considering that they were there in body only.

“Tyson Fury will never change his style,” said Whyte. “His style is to be cagey and elusive. If he goes and tries to knock Wilder out, it’s not smart. it’s stupid. Don’t get me wrong. Wilder is chinny, and he can get knocked over. But Fury doesn’t need to make it a shootout early rather than to try and knock him out mid-fight.

“Fury says a lot of things. “I’m going to bang this guy out early,’ but then he can’t knock the guy out,” said Whyte. “So let’s see what happens.”

Fury’s knockout prediction of Wilder appears to be a poorly thought out attempt to market the rematch. Instead of it going over well with the boxing public, they thought Fury sounded ridiculous and desperate to try and hype the fight. Again, it goes back to Top Rank’s decision to delay the rematch between them.

If they had let Wilder fight Fury last year in May, none of this would have been a problem. The first fight between them would still be fresh in the minds of fans, and both fighters would be a lot more energized. Even with the Canelo Alvarez vs. Gennadiy Golovkin rematch, it didn’t help that the Mexican star chose to wait a year before making the second fight.