By Charles Brun: Anthony Joshua initially said he thinks Andy Ruiz Jr. will definitely beat Dillian Whyte when/if the two fighters face each other in April or May. However, moments later, Joshua did a complete turn around in saying Whyte (27-1, 18 KO should beat Ruiz Jr. if he trains and prepares well. But that wasn’t the end of Joshua’s flip flopping.

AJ then said if Ruiz Jr, it’ll be a close fight. In other words, Joshua has no clue who will win the Ruiz vs. Whyte fight. Joshua (23-1, 21 KOs) was knocked out by Ruiz in the 7th round last June. Although Joshua avenged his defeat last December, most boxing fans believe the only reason he did was because of Ruiz not taking properly.

There’s a chance that Ruiz (33-2, 22 KOs) and Whyte could face each other in April or May. Whyte’s promoter Eddie Hearn has made former IBF/WBA/WBO heavyweight champion Ruiz a seven-figure offer for him to face Dillian in the U.S.

Ruiz Jr. vs. Whyte will be close fight – Joshua

“I think that Dillian has the beating of Povetkin,” said Joshua to IFL TV. “I think, and I may be a bit biased, but I think Ruiz beats him,” said Joshua in predicting Andy beats Whyte. “I’ve seen both ends of Ruiz. I’ve been in with both. Provided Dillian prepares well, spars right, he should be victorious, because he’s very talented. But provided Ruiz does the same thing, it’ll be a very close fight because Ruiz is a former world champion, and Dillian has championship potential.

“It would be a good time for them to level out their skills, because Dillian has the talent to be a world champion one day,” said Joshua. “It’s interesting. I keep hearing 800 days, but the last time I heard it was 810 days. So the days keep building up,” said Joshua about Dillian being ranked #1 with the WBC for over 800 days without getting a title shot.

There you have it. Joshua gave three different viewpoints on who wins the Whyte vs. Ruiz fight. In the end, Joshua could only say that it’s going to be a “very close fight.” In other words, Joshua DOESN’T KNOW who will win the Ruiz vs. Whyte fight.

Whyte doesn’t move well enough for him to escape the pressure from an in shape 250+ lb Ruiz, and he could lose that fight. If the match takes place in America, then Whyte could have problems. He won his fights against Dereck Chisora by a combination of controversial scoring, and a referee that seemed to be only paying attention to Chisora’s fouling, and not his own.

“It would be interesting if he gets that fight, because we offered Dillian and Ortiz,” said Joshua. ‘But we offered Dillian that fight last April, 2019 at Wembley to fight for the heavyweight championship of the world against myself. So I believe he’s thinking he’s got the beating of Wilder, so he’s keen to get that fight.

“It puts him [Whyte] in a powerful position when it comes to him fighting me and I’m still champion,”  Joshua said about Whyte if he beats Wilder to win the WBC belt. “You see how hard it is for Dillian and Wilder to make that fight. Dillian showed a message where The Bronze Bomber said, ‘I know I have to fight you, but I’m going to make you wait.’

“You see how hard it is for them to make the fight,” said Joshua on Wilder and Whyte not fighting. “So you see why it’s so difficult for me and Wilder to make the fight. So that’s a challenger trying to fight, who brings a lot to the table, a great name on Wilder’s record. Now you’ve got someone who’s got all the belts, who wants to become undisputed champion,” said Joshua.

Dillian seems very confident that he can beat Wilder, but that doesn’t mean anything. Whyte was confident in the same way before his fight against Joshua in 2015, and he ended up getting stopped. Wilder is confident too.

Whyte and Ruiz both have a lot to lose if they face each other. Ruiz wants a trilogy fight with Joshua, and to get that the match, he can’t afford to lose to Whyte. As for Whyte, he’s the mandatory challenger to WBC heavyweight champion Decontay Wilder.

“If Andy Ruiz wins, Wilder is going to fight him next,” said Joshua in talking about Wilder recently saying he would fight Andy next if he beat him last December. “Now that I’ve beaten Ruiz, he’s going down the other route. It’s really difficult. It’s about the power play.

Wilder wanted Ruiz to win because he figured it would be easier to put together a fight with him. Ruiz’s management likely wouldn’t foul things up by offering Wilder a flat fee or insist that he fight Whyte first to earn the fight with AJ. 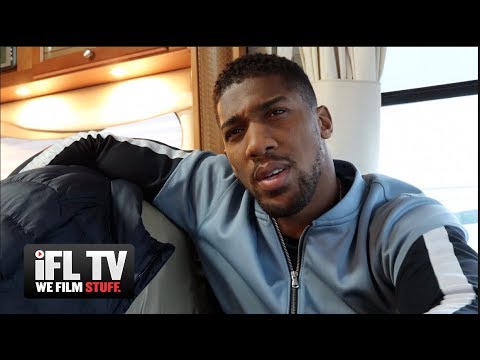 What Joshua needs to do is look at his promoter Eddie Hearn, and point the blame on him for the Wilder fight didn’t get made. Hearn was the one that was interested in giving Wilder only flat fees in 2018 when he was ready to fight Joshua. Eddie wasted a lot of time insisting that Wilder agree to a flat fee. When Hearn finally did offer Wilder a purse split, it was 60-40 split in favor of Joshua.