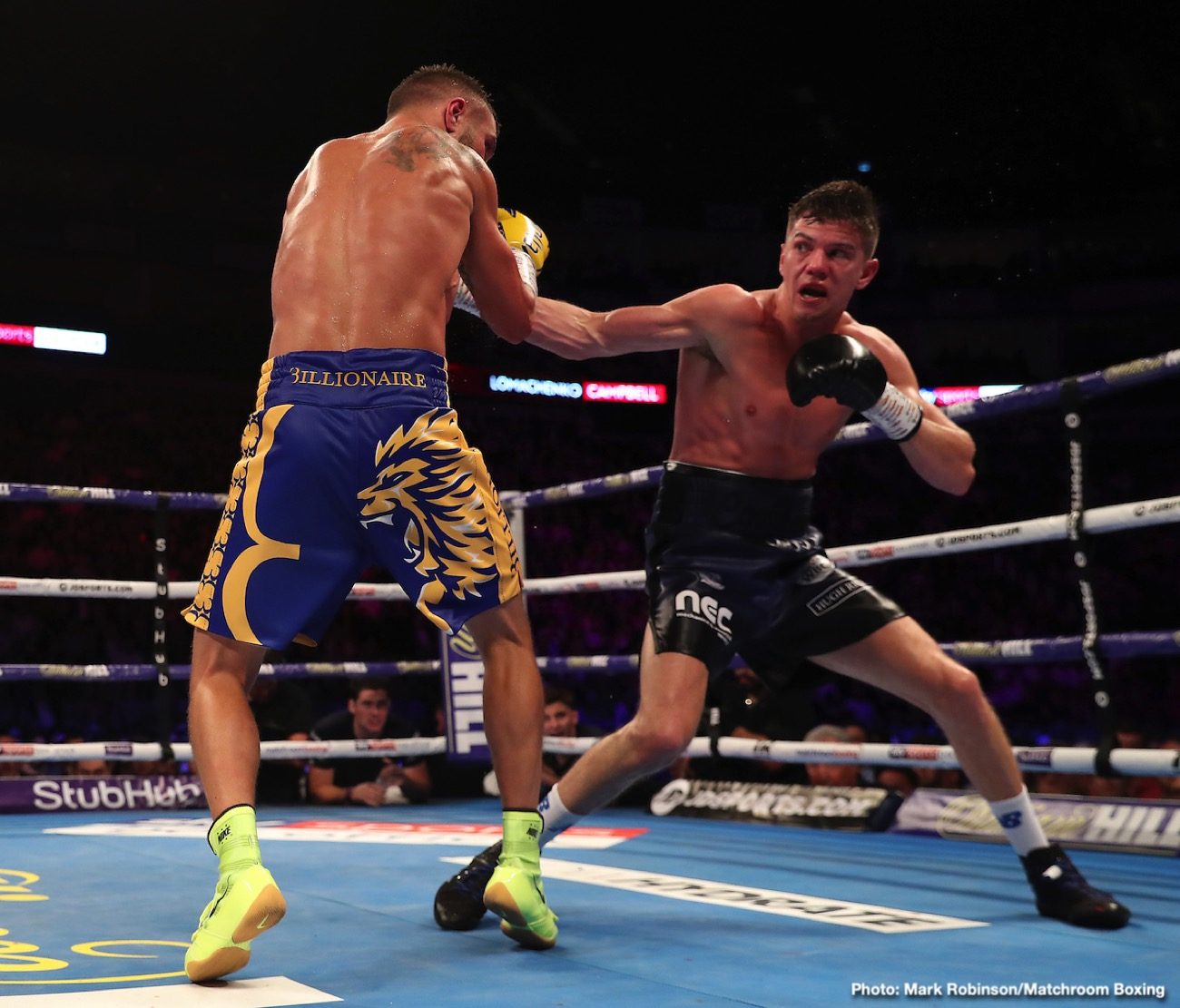 #1 WBC Fortuna and #2 WBC Campbell will be competing for the vacant WBC 135-lb title that the World Boxing Council stripped from injured lightweight champion Devin Haney. He’s out with a shoulder injury, and isn’t available to defend against WBC mandatory Fortuna. @MikeCoppinger is reporting this is a done deal.

When Haney comes back from his shoulder injury, he’ll presumably face the winner of the Fortuna-Campbell fight. Haney has talked recently about not wanting to stay at 135 too much longer. He says he wants big fights, and if he can’t get them then he’ll move up to 140.

The Fortuna vs. Campbell fight will very likely wind up the co-feature bout on a Matchroom Boxing card. Promoter Eddie Hearn has mentioned wanting to stage some fights on March 28.

This is a really great fight between well deserving contenders. Campbell, 32, arguably should have been the one that fought Haney for the vacant WBC lightweight title instead of  having to take on WBA/WBO champ Vasiliy Lomachenko for the belt last August. Campbell hasn’t fought since losing a 12 round decision to the 31-year-old Lomachenko at the O2 Arena in London.

Lomachenko and his promtoters at Top Rank petitioned the World Boxing Council to be able to fight for the vacant WBC belt, and they granted the request. This move enabled Lomachenko to step in front of Haney to fight Campbell.

“Source: Javier Fortuna and Luke Campbell have agreed to terms for a vacant WBC lightweight title bout. The fight will be streamed by DAZN and is being targeted for March 28; April also possible. New York is under consideration. Vasiliy Lomachenko is the WBC franchise champion,” said @MikeCoppinger.

Javier has bounced back well since losing a 12 split decision two years ago to Robert Easter Jr. in 2018. Some boxing fans believe that Fortuna did enough to deserve the win against Easter Jr. in that fight, which took place at the Barclays Center in Brooklyn, New York. Fortuna was penalized in round 2 for holding and hitting. Ultimately, that point deduction would back to haunt Fortuna when the scores were announced.

Since that defeat, Fortuna has beaten Sharif Bogere and Jesus Cuellar. In Fortuna’s fight against Adrian Granados in 2018, he fell out of the ring and suffered a shoulder injury. That was a strange fight in which Fortuna was giving as good as he got through three rounds, but he then slipped through the ring ropes in the 4th and was injured.