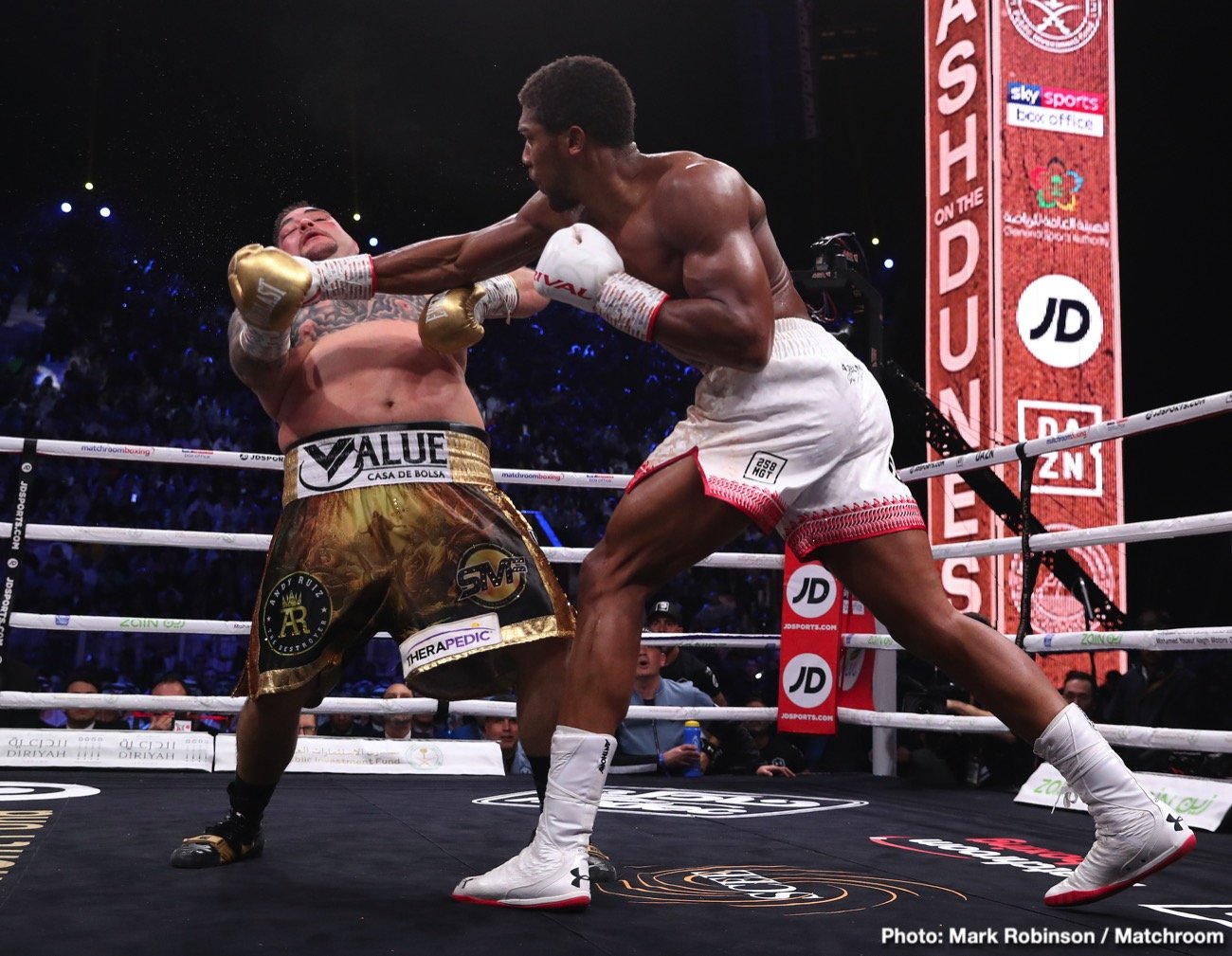 By Scott Gilfoid: Anthony Joshua believes that he rates 70% of the revenue for fights against Deontay Wilder and Tyson Fury, but he understands that’s not realistic approach to getting the fights made. Joshua’s promoter Eddie Hearn said this week that to make the Wilder and Fury fights, AJ will need to give them a 50-50 purse split right down the middle.

Sadly, Joshua has gone from talking about wanting to build his LEGACY to now squabbling over purse splits, and wanting to get the lion’s share of the dough for the Wilder and Fury fights. As a spectator, it’ll be interesting to see if Joshua chooses to dig his heels into the sand and take the Floyd Mayweather Jr. approach of wanting the lion’s share. If so, then it’s possible Joshua could wind up never fighting Wilder and Fury.

Unfortunately, Joshua (23-1, 21 KOs) is resistant to the idea of giving those two heavyweights an even share of the loot, as he feels that him winning back his IBF/WBA/WBO heavyweight titles puts him in the driver’s seat in negotiations.

Additionally, Joshua has the belief that him having more titles than WBC champion Wilder (42-0-1, 41 KOs) and Fury with his invisible lineal title means he should get the bigger money.

“I just asked what’s his reasoning?” said Joshua about his promoter Eddie Hearn saying a Joshua fight against Fury or Wilder would be a 50-50 split. “When Andy was the champion, and won the belts and was having issues about where it was.

“There is an aspect of when you’re one of the driving forces in the heavyweight division, you have a bit more say,” said Joshua about his belief he deserves more than a 50-50 split against Fury and Wilder. “So every time I get the belt, it’s like 50-50.

Oh my, I think Joshua has winning back his IBF/WBA/WBO titles has created an intratible monster. This is what Gilfoid was afraid of. Winning back those three straps from the grossly obese Ruiz Jr. has planted ideas into Joshua’s head. He now thinks he’s ready to call the shots when it comes to Wilder and Fury, and that’s just plain trouble.

With all the money Wilder and Fury have already made in boxing, they’re not likely to grovel for the smaller money against Joshua.

AJ talking about purse splits sounds like how Hearn used to drone on about them a couple of years ago when was messing things up trying to put together a fight with Wilder. Now Joshua has taken a page out of Hearn’s playbook by talking about splits.

“So what I have to do with my ego is instead of saying I want 70%, I need to explain and say that’s not really the case,” said Joshua. “That’s not really where we are right now in the splits. These are the stats and the facts. It’s got to be right in my head. I’m going into the fight.

“Wilder is a solid fighter, a dangerous fighter,” Joshua said. “There’s no denying it. I want to take that challenge because he’s in his prime, I’m in my prime, and it’s the one boxing fans are screaming for. It’s the one that I want. I’ve got 3 world title belts, and I want the last one,” said Joshua.

Hopefully Joshua doesn’t ruin things when Wilder and Fury tell him that they’re not going to accept 30% for a fight against him.

Joshua losing to Ruiz Jr. makes it extremely hard for him to argue that he rates more than a 50-50 deal. He wasn’t just beaten by replacement opponent Ruiz Jr. last June. Joshua was destroyed by Andy, and knocked 4 times before he quit in the 7th round in New York. If Joshua was still unbeaten, then he would be in a better position to gripe about deserving to be A-side against Wilder and Fury.

Fury should be victorious against Wilder – says Joshua

“I think Fury is going to win,” said Joshua in predicting ‘The Gypsy King’ will defeated Wilder on February 22. “I just think a man that came so close the first time, won’t let it go the second time. People say that Fury won anyway the first time. Who knows? I hope he’s in a better condition after a three-year layoff.

“Maybe he was motivated at the time,” Joshua said about Fury. “Provided that he’s been consistent, and he’s gotten rid of the rust and cobwebs. He should be victorious. He came so close to doing it the first time. He’s a man, he should be able to do it for sure,” said Joshua about his belief that Fury will beat Wilder.

Joshua’s states that fans think Wilder should have lost to Fury in 2018. Well, a lot of boxing fans say the referee gave Fury a long count by not marching up to him to start a count after he was poleaxed by Wilder in the 12th. The referee went the opposite way after Wilder dropped Fury. Some believe the fight should have been stopped on the spot when it was clear that Fury was unconscious.

This sounds like wishful thinking on Joshua’s part in picking Fury to beat Wilder. AJ has already openly admitted that he’s pulling for Fury to win the fight, because he has a better shot at negotiating a fight with him than Wilder. As such, Joshua’s prediction of a win for Fury is more of a rainy wish than something you can go on.

“Eddie’s doing a great job, you know? He’s applying pressure,” said Joshua about Hearn putting pressure on Wilder and Fury by saying he wants the winner to face Joshua in Saudi Arabia. “I respect it. That’s what I want my promoter to do. Get out there and apply pressure.

What Joshua doesn’t realize is that a lot of his loyal British boxing fans aren’t going to be able to see him fight if Hearn chooses to stage another one of his fights in the middle east.

While it may help Joshua’s bottom line to fight Fury or Wilder in Saudi Arabia or Turkey, it’s going to be a hardship for his fans. As such, Hearn isn’t helping the fans by taking Joshua’s fights all over the globe rather than putting them at home in the UK.