By Dan Ambrose:  Jessie Vargas (29-2-2, 11 KOs) could be on the verge of stardom as he heads into his February 29th fight against former four division world champion Mikey Garcia at The Ford Center at The Star, in Frisco, Texas. According to promoter Eddie Hearn, the 30-year-old Vargas will become a “MAJOR star” if he defeats little 5’6″ Mikey (39-1, 30 KOs) in their main event fight on DAZN next month.

Thus far, Vargas hasn’t come remotely close to becoming a star despite the fact that he’s a former 2 diviion world champion. The problem is, Vargas has beaten lesser fighters to capture his two division world titles in the past. He beat Khabib Allakhverdiev to win the WBA light welterweight strap in 2014, and then he defeated Sadam Ali to capture the WBO welterweight title.

When Vargas tried to step up and fight opposition that would turn him into a star, he lost to Tim Bradley and Manny Pacquiao. Further, Vargas was held to a draw in fights against Adrien Broner and Thomas Dulorme. Vargas has just one win in his last 3 fights.

Hearn: Vargas becomes a major star at 147 if he beats Mikey

“If he does, his career has been terrific anyway,” said Hearn to Little Giant Boxing when asked, ‘what happens if Vargas beats Mikey?’ “But if he beats Mikey Garcia at The Ford Center in Dallas, then all of a sudden he becomes a major, major star in the [147-lb] division. And although there’s no belts on the line for this fight yet, from a profile perspective, the winner of this fight is going to be one of the lead guys at 147 pounds.

“Like I said, Jessie has been there and done it in the welterweight division,” said Hearn. “Mikey hasn’t. He wants to do that, and he wants to become a five weight world champion. But for him to do that, he’s got to come through Jessie Vargas on February 29,” said Hearn.

A lot of boxing fans would disagree with Hearn about his belief that Vargas will be transformed into a superstar at 147 with a win over Mikey. First off, Vargas no longer fights at 147, because it’s difficult for him to make weight. When Vargas did fight at welterweight from 2015 to 2018, he didn’t distinguish himself as a star. His record during that three-year period at 147 was 2-1-2. Vargas’ wins came against Sadam Ali and Aaron Herrera.

Hearn talks about his courting of Mikey Garcia

“This is a great fight. Jessie Vargas is a two-time world champion. Mikey Garcia is a former four division world champion. Jessie has won a world champion at 147, and Mikey has only boxed there once. He lost to Errol Spence. I think this is a brilliant Mexican battle at The Ford Center in Dallas.

“I want to thank Jerry Jones as well for getting behind the event down there,” said Hearn about the Garcia-Vargas fight. “I’m excited. 2020 looks like it’s going to be an unbelievable year. The finish that we’ve had and the momentum we’ve had has been great. It’s difficult for me because my job as a promoter is to hype everything up,” said Hearn.

Right now, Hearn is in the honeymoon stage of signing the 32-year-old Mikey. He sees all the great things Mikey accomplished in winning world titles in 4 divisions, and he believes that he’s going to continue to find success. But what Hearn hasn’t factored in is the fact those accomplishments came a long time ago for Mikey, and he’s now fighting at 147. Mikey was a good fighter in the lower weight classes.

If Mikey loses to Vargas, the honeymoon period will be over, and Hearn will need to figure out whether it’s worth it to continue with him. Hearn can try and convince Mikey to drop down a weight class to 140, and see if he can handle it.

“So in a press release today, I said this [Mikey vs. Vargas] has the potential to be a Barrera vs. Morales style fight, and then you get people saying, ‘You’re over-selling it,'” said Hearn. “That’s my job, but let’s be honest. They’re two brilliant fighters. You’ve got a four division world champion, and a two division world champion. This is a big, big fight.

“So we’re in a position where this is a big fight for both guys, and they’re going to put it all on the line,” said Hearn in talking about Garcia vs. Vargas. “I guess on paper, you’ve got to say that Mikey is the favorite, but when you see Jessie’s credentials, particularly at 147 pounds.

Mikey vs. Vargas is nowhere near Marco Antonio Barrera vs. Erik Morales. Those guys were better skilled, and they were true warriors. Vargas is a career-long B-level fighter, and he’s not overly talented. He was a paper champion at 140 and 147. In Mikey’s case, he throws one punch at a time, and he’s just someone that has gotten over by his power. When Mikey fought Orlando Salido, he bailed when the going got tough.

The odds-makers might be in for a big surprise if Mikey gets out there, and is over-matched against the bigger Vargas. Just going off the way that Mikey looked in his one-sided loss to IBF welterweight champion Errol Spence a year ago, he shouldn’t be the favorite. Spence appeared to be taking it easy on Mikey, and he still was dominating him.

“So I think it’s a fascinating fight, and I think it’s a lot closer than people think,” continued Hearn on Vargas vs. Garcia. “I expect it to be a war, because both guys need to win, and neither will back down.

“Fight by fight deal with an option to extend,” said Hearn when asked about his recent deal with Mikey. “So we can keep Mikey long term, and we’ll be looking to do that. But he’s got to beat Jessie Vargas. He told me, ‘You don’t have to worry about a longer term deal.’ He’s always had a fight deal, Mikey Garcia, with PBC. Now he’s obviously moved over to DAZN. It’s great for us. I said something earlier, it’s not always about just trying to capture fighters in multi-fight deals.

It’s good that Hearn is recognizing that the Garcia-Vargas fight is closer than what people think, because he won’t be in shock if Mikey loses. Mikey looked poor even at 140 in his fights against Sergey Lipinets and Adrien Broner.

Those weren’t major talents at 140, and yet Mikey struggled. Broner was walking Mikey down in the second half of their fight, and so was Lipinets. If Mikey fought Regis Prograis, Josh Taylor or Jose Ramirez, he’d lose all three.

DAZN is developing an unrivaled roster

“We’re starting to develop a roster that is unrivaled in my opinion, and you can’t ignore it,” said Hearn on his Matchroom stable. “If you’re consistently charging fans $80 for pay-per-view, and you’ve got a platform here where for $99, you can have an entire year’s subscription.

“Not only for all the top names that I’ve mentioned, but Bellator, all our UK shows, our international shows, new sports coming, change up with major baseball league as well,” said Hearn about DAZN. “So the value is incredible.

“When you start breaking it down, and listing it, it’s not a tough sell,” said Hearn. “If you’re prepared to pull $80 out of your pocket every month to watch one night of boxing on pay-per-view, if you don’t have DAZN, it’s crazy.

“Every week and week out, we’ve got great events. We’ve got consistently great shows, and when you look at the…someone sent me a Fight of the Year candidate list, and 70% of them have been on DAZN,” said Hearn.

“I’m not even talking about Canelo-Kovalev and Canelo-Jacobs,” said Hearn. “They weren’t even Fight of The Year contenders, but they were probably two of the biggest fights of the year on DAZN. But Joshua against Ruiz, and Golovkin against Derevyanchenko, Danny Roman against TJ Doheny, Rungvisai against Estrada, Inoue against Donaire, and Josh Taylor against Regis Prograis.

“These are consistent fights that are like Fight of The Year contenders that have been delivered consistently on DAZN,” said Hearn.

DAZN is definitely creating a huge roster of the top talent in boxing, and you’ve got to thank Hearn for that. He’s done an excellent job of attracting talent fighters to sign with them. 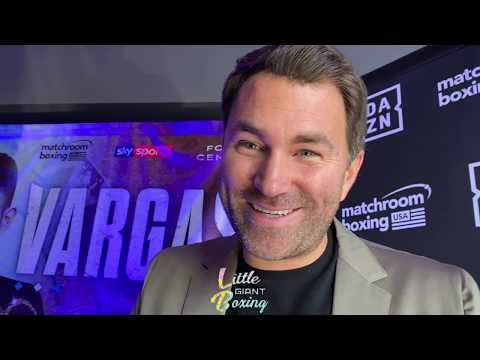 
« Guillermo Rigondeaux vs. Liborio Solis on Feb.8 on Russell Jr. vs. Nyambayar in Allentown, Pa